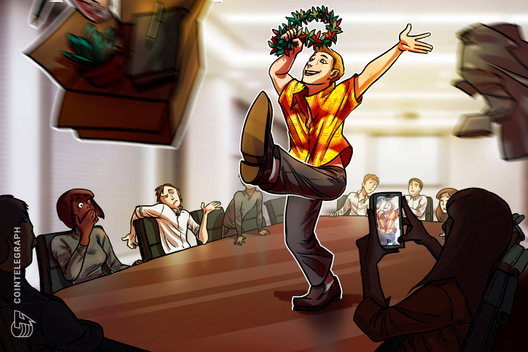 Prices moved up and back down, yet the talent kept coming to work: Let’s take a look at a list of individuals who abandoned legacy industries and ventured into blockchain in 2019.

Prominent figures from a range of long-established companies found greener pastures in the blockchain realm in 2019. From BlackRock to Goldman Sachs, and from HSBC to the SEC, traditional industries saw some of their top personnel leave for new prospects in cryptocurrency over the past year.

Frigid winter conditions in the crypto market failed to dissuade career moves into the industry. Despite the bearish market conditions of early 2019, many saw fit to join the blockchain movement and leave their familiar jobs behind.

Tron hired David Labhart as the company’s first chief compliance officer. Labhart previously worked as a supervisory attorney at the United States Securities and Exchange Commission (SEC). The blockchain platform picked up Labhart to help in its efforts to meet the variety of regulatory compliance obligations in the U.S. and other global markets.

Hopping across the pond to France and the United Kingdom, British blockchain technology group Setl hired the former governor of the French central bank, Christian Noyer. Joining Setl’s board of directors, Noyer offered the company a “wealth of experience in the financial, regulatory, economic management and central banking world.”

Blockchain payments network Ripple hired a former HSBC general counsel, Stuart Alderoty. Alderoty offered legal expertise that would help Ripple to navigate through the legalities of its operations. Ripple was looking for more legal help as it faced a consumer lawsuit over alleged securities laws violations due to its association with the XRP cryptocurrency.

ErisX scooped up three industry veterans from Barclays, Youtube and the Chicago Board Options Exchange (CBOE) to fill executive roles at the company. Robert Thrash of Barclays took on the role of chief operating officer (COO). Arnold Connell, formerly a creator at Youtube TV, became head of infrastructure. John Denza moved from the fintech and exchange sector, joining ErisX as a business development executive.

Spring 2019 displayed a thaw in temperatures and prices, as the market warmed to renewed positivity and optimism. The exodus of blue-chip execs into crypto start-ups continued.

A former engineering executive at PayPal and Google, Mike Blandina joined Bakkt as its chief product officer (CPO). Blandina is an expert with over 25 years of experience in digital payments, engineering, strategy and operations. Bakkt hired Blandina to help the company “bring real applications to Bitcoin (BTC) and other cryptocurrencies.” Blandina recently took the reins as CEO of Bakkt, as of December 20.

In addition to losing talent to ErisX in February, Barclays also saw the departure of Chris Tyrer, who was hired by Fidelity Digital Assets, the crypto platform of Fidelity Investments. He served as head of digital assets project, head of commodities trading, and global head of crude oil trading at Barclays over a period of 13 years.

Leaving the world of private equity and public markets, Glen Braganza departed from Worldpay U.S. to join cryptocurrency payment services provider BitPay. His experience was touted by BitPay CEO Stephen Pair as a “key advantage” in helping to move the company into the mainstream with “fast consumer transactions and easy global payments.”

With crypto markets riding high, the exit door became more appealing to a growing range of experts and industry veterans. The trend to pull up stakes from traditional to blockchain showed no signs of slowing.

Bidding adieu to his roles as strategic executive at Dell and the National Basketball Association, Gin Chao joined Binance as their global strategy officer. Chao’s new role would focus on corporate development, venture investment and finding new business opportunities as part of its global strategy.

In an unusual politics-to-crypto crossover, former United States Senator Rick Santorum joined the board of a Catholic community-oriented cryptocurrency project called Cathio. The platform was “designed to address the needs of the Catholic economy by ensuring lower costs, greater transaction visibility, and improved security for the community.”

Crypto summer was all about Facebook’s Libra, at least until the fanfare fell flat following regulatory backlash. The company hired Standard Chartered Bank’s head of public affairs Ed Bowles in anticipation of “greater regulatory scrutiny” in Europe. Bowles was picked up for his expertise as a senior bank lobbyist, joining the team as the London-based director of public policy.

As temperatures cooled and markets eased, the entry of new participants from the traditional realm did not appear to weaken. If anything, the cast of characters joining the crypto stage grew, with big banks and financial institutions proving to be an excellent source of talent.

Derek Gobel of BNP Paribas joined BitMEX parent firm HDR Global Trading as general counsel. After working for the French banking group for more than 19 years, Gobel’s new role would provide legal oversight for HDR Global. The move was made in hopes that Gobel could help the company “move forward in today’s continually evolving regulatory environment” according to a BitMEX blog post.

Mike Kennedy, founder of the Zelle digital payments network, joined Interstellar as its new CEO. The Zelle payment system is used by numerous traditional financial institutions such as JPMorgan Chase, Citi, and Bank of America, according to its website. The Stellar-focused (XLM) crypto development company took on Kennedy to help build out new services in international payments.

BlackRock and Goldman Sachs said farewell to a 25-year veteran of the financial institutions, Howard Surloff, who joined Blockchain.com as general counsel. The crypto wallet provider hired Surloff to help advance “legal, compliance and corporate governance within the crypto industry.”

Former Google product manager Tony Sheng joined Blockchain and cryptocurrency investment firm Multicoin Capital. Sheng was hired to help the firm “secure new deals” and to “work with existing portfolio members.” Also departing from Google, former Russia chief technology officer Jennifer Trelewicz became the new chief business officer (CBO) at Credits. Her past experience as a director at IBM was touted as an asset for future collaboration between the companies.

In its continued mission to meet legal compliance requirements, Ripple picked up four more board members: Craig Phillips, Michelle Bond, Ron Hammond, and Susan Friedman. Phillips hailed from the United States Treasury Department and joined Ripple to advise on “strategic regulatory opportunities”. Bond’s list of titles is considerable, having served as Senior Counsel for the SEC and the U.S. Senate Banking Committee as well as being the former global head of policy at blockchain, regulatory affairs and public policy at Bloomberg. Former Congressional Assistant Ron Hammond joined Ripple in his new role as manager of government relations. Hammond was involved in the creation of the Token Taxonomy Act, a bill that was designed to provide greater clarity and certainty for businesses in the American blockchain industry. Friedman previously worked at the CFTC and joined Ripple in her new role as international policy counsel.

Fidelity Investments kept the hiring spree going, adding Michael Zinaman as its product specialist. At Fidelity, Zinaman’s role focuses on the company’s strategy regarding cryptocurrencies, custody, and execution services. He had previously worked at Imperial Capital, an investment banking firm, before becoming managing director of blockchain and digital assets at Canaccord Genuity.

In November, another United States government official migrated to the blockchain industry, joining cryptocurrency payment startup C Labs. Jai Ramaswamy oversees compliance strategy as the company works to provide “an open platform that makes financial tools accessible to anyone with a mobile phone.”

Julian Sawyer, a former CEO and co-founder at the United Kingdom-based Starling Bank, joined the Gemini exchange as the new managing director of the U.K. and Europe.

And in the most recent departure from the SEC, Alex C. Levine was hired to handle compliance for all security offerings at TokenSoft, a security token platform. Levine will serve as the new chief legal officer, helping the firm to “ensure that its customers receive the ‘best-in-class’ compliance tooling for security token issuances.”

The migration continues. As the cryptocurrency market ebbs and flows, the movement of talent from the traditional world to blockchain-focused entities persists. Working busily to build and grow in the nascent industry, those in the know seem to be indifferent to the whims of traders, whales, and the usual volatile price fluctuations.