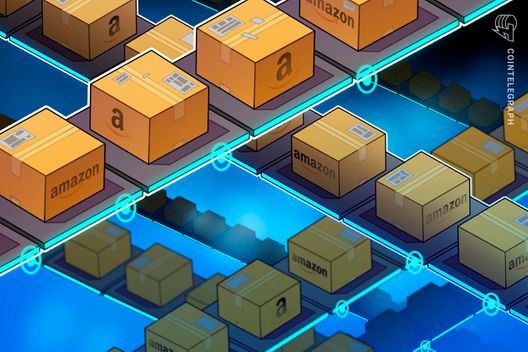 On November 13, Amazon was granted with two crypto-related patents.

On November 13, Amazon was granted two crypto-related patents. While the American e-commerce pioneer, with a revenue of over $177 billion, has not chosen to accept Bitcoin (BTC) and major altcoins as a payment option despite public interest and competitors’ experience, it has not ignored the subject altogether. In fact, Amazon Web Services (AWS), the company’s cloud computing arm, has contributed to blockchain adoption. 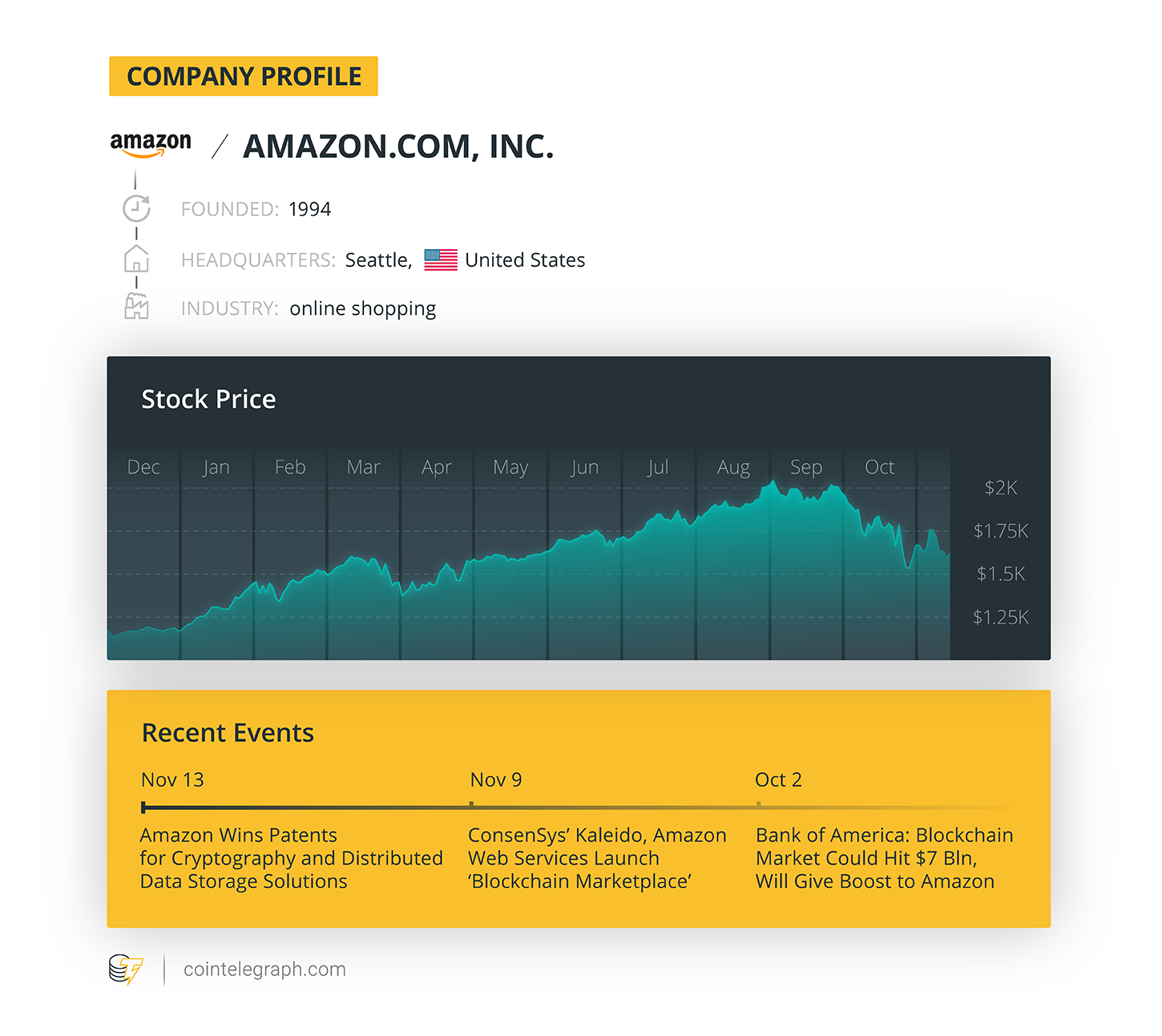 “Obviously it gets a lot of press and we have considered it, […] but we’re not hearing from customers that it’s right for them and don’t have any plans within Amazon to engage Bitcoin.”

Curiously, the move came just few months after Overstock.com, one of Amazon’s rivals, became the first major retail company to introduce BTC as a payment option and found initial success, as its CEO Patrick Byrne claimed that Amazon would have to “follow suit.”

Taylor’s comment could have meant that the e-commerce giant would turn to cryptocurrencies once they see more exposure. However, the 2014 decision stays to date, regardless of the overall improved market capitalization and adoption, public petitions addressed to CEO Jeff Bezos, and some businesses being built around serving as the middlemen for Amazon customers willing to pay with digital currencies.

Nevertheless, Amazon has not distanced itself from engaging with crypto altogether. In May 2014, not long after announcing it had no plans for crypto, Amazon was awarded a Bitcoin-related patent for the use of digital currencies as payment for cloud computing services on Amazon Web Services (AWS). It is worth noting, however, that the patent was filed back in March 2012, and crypto was mentioned as only one possible form of payment there.

In November 2017, the e-commerce giant was reported purchasing a number of crypto-related domain names including “amazoncryptocurrencies.com,” “amazoncryptocurrency.com,” and “amazonethereum.com.” It was also noted at the time that “amazonbitcoin.com” redirects to the original Amazon URL.

However, it could have been an attempt to shield the Amazon brand or avoid confusion with Amazon Coin, the company’s digital currency that was introduced in 2013 for Kindle e-book owners. The coin has not seen extensive use despite the documented public interest.

In April 2018, Amazon won a patent for a subscription feed system described as a “streaming data marketplace.” Essentially, the company claimed, it could “identify [Bitcoin] transaction participants” for governments and law enforcement. The document was filled in June 2014 and showed that while the e-commerce giant might accept the idea of dealing with crypto, it put strong emphasis on the Know Your Customer (KYC) side of the business. That, in turn, would neglect a major part of Bitcoin’s ideology and design.

Thus, Amazon has not shown itself to be exactly a pro-Bitcoin company. Nevertheless, its relationship with the underlying technology, blockchain, has proven to be much more fruitful. 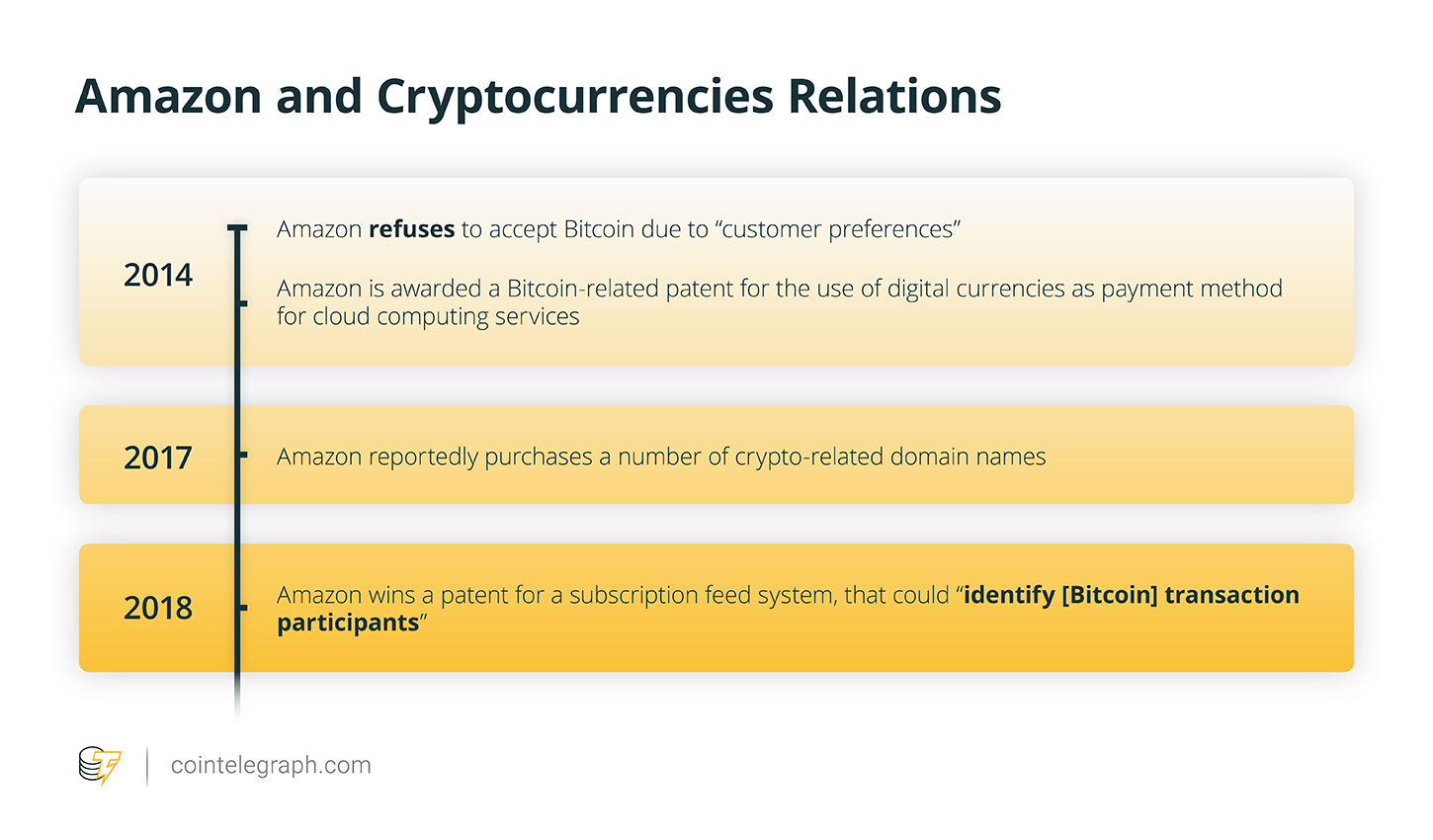 On December 5, Amazon Web Services (AWS) announced a partnership with R3 — a major blockchain consortium of over 200 members — to allow its Corda platform to become one of the first distributed ledger technology solutions (DLT) on the AWS marketplace. Corda is an open-source DLT platform designed to work within finance to operate complex transactions and restrict access to transaction data. Basically, it allowed users to deploy decentralized applications (dApps) onto the AWS platform and to create new apps directly.

The news came as a shock, granted that just a few days before the announcement, AWS CEO Andy Jassy essentially criticized blockchain for not having use cases “beyond the distributed ledger,” noting that even those had very limited capabilities. Moreover, he reiterated the company’s policy not to “build technology because we think it is cool.”

He did add, however, that AWS was interested in ways that blockchain could benefit their customers:

“We are very intrigued by what customers are ultimately going to do there.”

Still, there were at least three blockchain-based platforms on the AWS marketplace before Corda’s arrival and Jassy’s speech, which shows that Amazon’s initial interest in blockchain arose earlier in 2017.

On April 19, 2018, AWS’s journey into blockchain continued. The cloud platform introduced its blockchain framework for Ethereum (ETH) and Hyperledger Fabric, allowing users to build and manage their own blockchain-powered DApps. Called AWS CloudFormation Templates, the tool was designed to avoid the time-consuming manual setup of one’s own blockchain network.

Next month, in May, AWS partnered up with ConsenSys, a blockchain incubator started by Ethereum’s co-founder Joseph Lubin. Specifically, the e-commerce company collaborated with Kaleido — a blockchain business cloud that aims to help firms accelerate the “entire journey from experimentation and PoCs [proofs-of-concept] to pilots and production,” and is based on the Ethereum blockchain. Together, they aim to offer simplified blockchain cloud platforms for its clients so that they can “focus on their scenario, [without having] to become PhDs in cryptography,” as Kaleido co-founder Steve Cerveny explained to CNBC.

Kaleido has since expanded to a full-stack platform dubbed “Kaleido Marketplace.” It reportedly “eliminates 80 percent of the custom code” needed to build a given blockchain project by providing an array of tools and protocols that are “plug-and-play,” spanning needs from back-end development to front-end app user interfaces.

Amazon’s blockchain experiments have attracted recognition from mainstream players: for example, “Big Four” audit and consulting firm Deloitte has emphasized Amazon’s blockchain-related efforts in its October report, arguing that the e-commerce giant had been helping to stimulate technology adoption and contributing to improving the costs of operations on blockchain. Additionally, Bank of America (BoA) research analyst, Kash Rangan, told CNBC that blockchain is well-suited to some of the world’s largest corporations, noting: 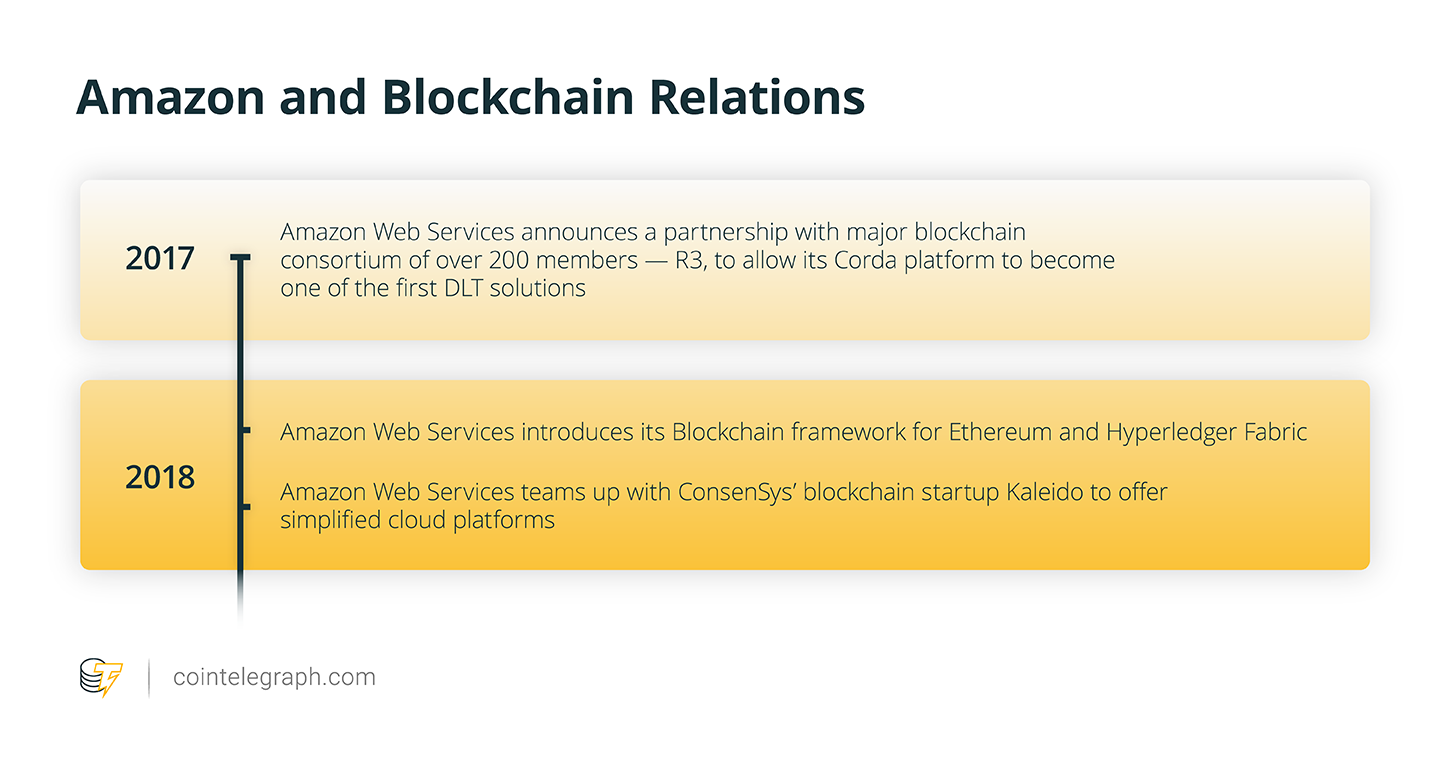 While Amazon has been acquiring both cryptocurrencies and blockchain-related patents, it is fair to take them with a grain of salt — as the industry is still young, a lot of players, like the aforementioned Bank of America (BoA), which currently has the most of such patents, are merely trying to mark the field before the others get there. Consequently, not all patents (blockchain-related or not) are going to be put to use any time soon. For instance, in 2016 Amazon was awarded a patent for a system to deliver goods through a chain of underground tunnels, a highly ambitious and costful goal that is probably not the company’s top priority.

The first patent document outlines a “signature delegation” method for “protecting the integrity of digital signatures and encrypted communications,” by allowing for the generation, distribution, validation, and revocation of one-time-use cryptographic keys. In the proposed system, these keys are arranged in what is known in cryptography as the so-called “Merkle Tree” structure, which is essentially a binary tree of hashes constructed from the bottom up.

Amazon’s second patent, is related to distributed data storage. The filing proposes a “grid encoding technique,” using groups of collected “shards,” where each shard represents a logical distribution of data items stored in a given grid. The patent filing suggests this method can help minimize storage redundancy.

While Amazon might be having more patents coming, the e-commerce giant is nowhere to be seen in the main part of patents, occupied by the likes of its Chinese counterpart Alibaba and IBM. Nevertheless, Amazon is set to continue its explanation of the technology, as the AWS platform continues hosting blockchain solutions, and the company is looking to expand its staff with more blockchain engineers. 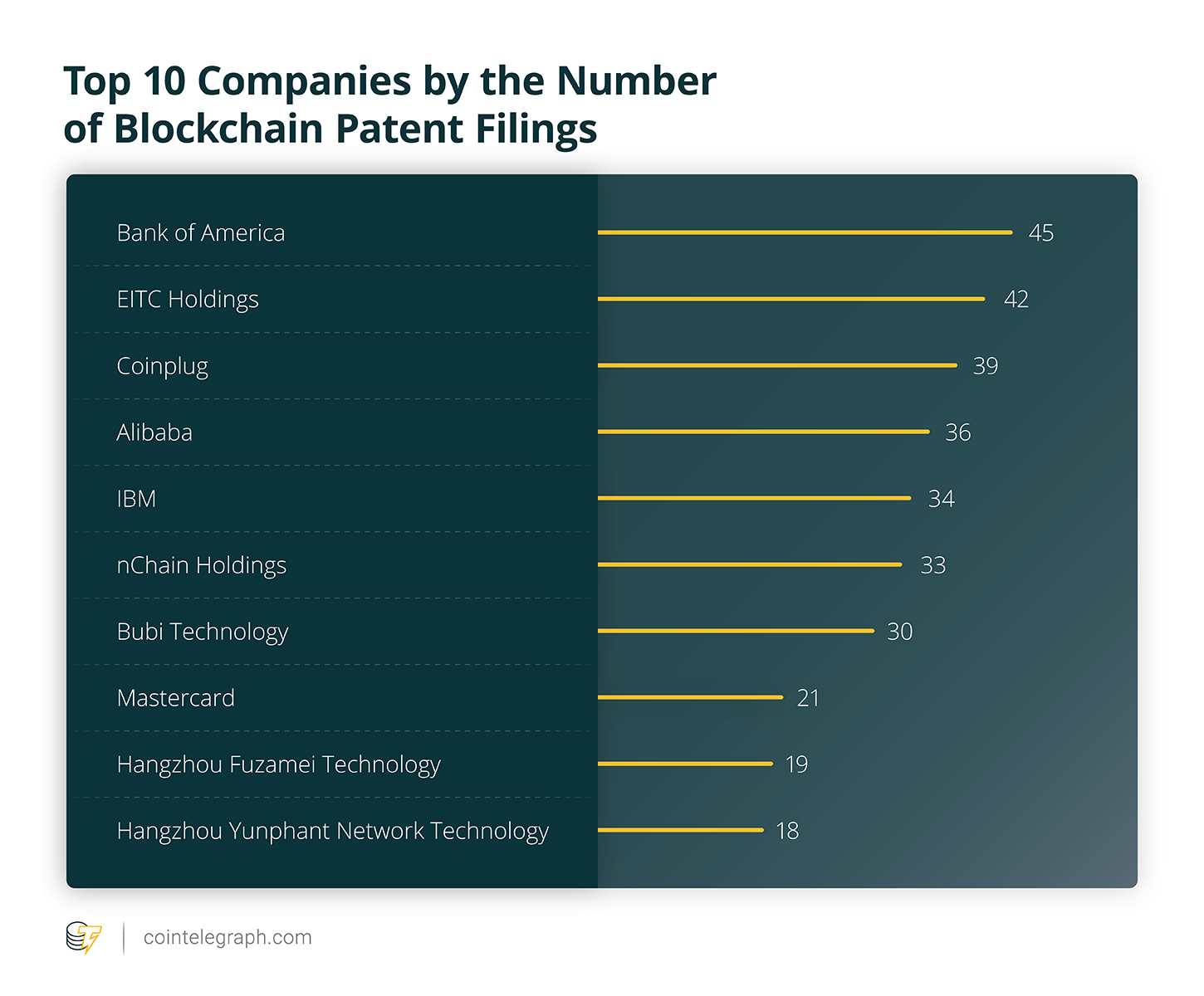