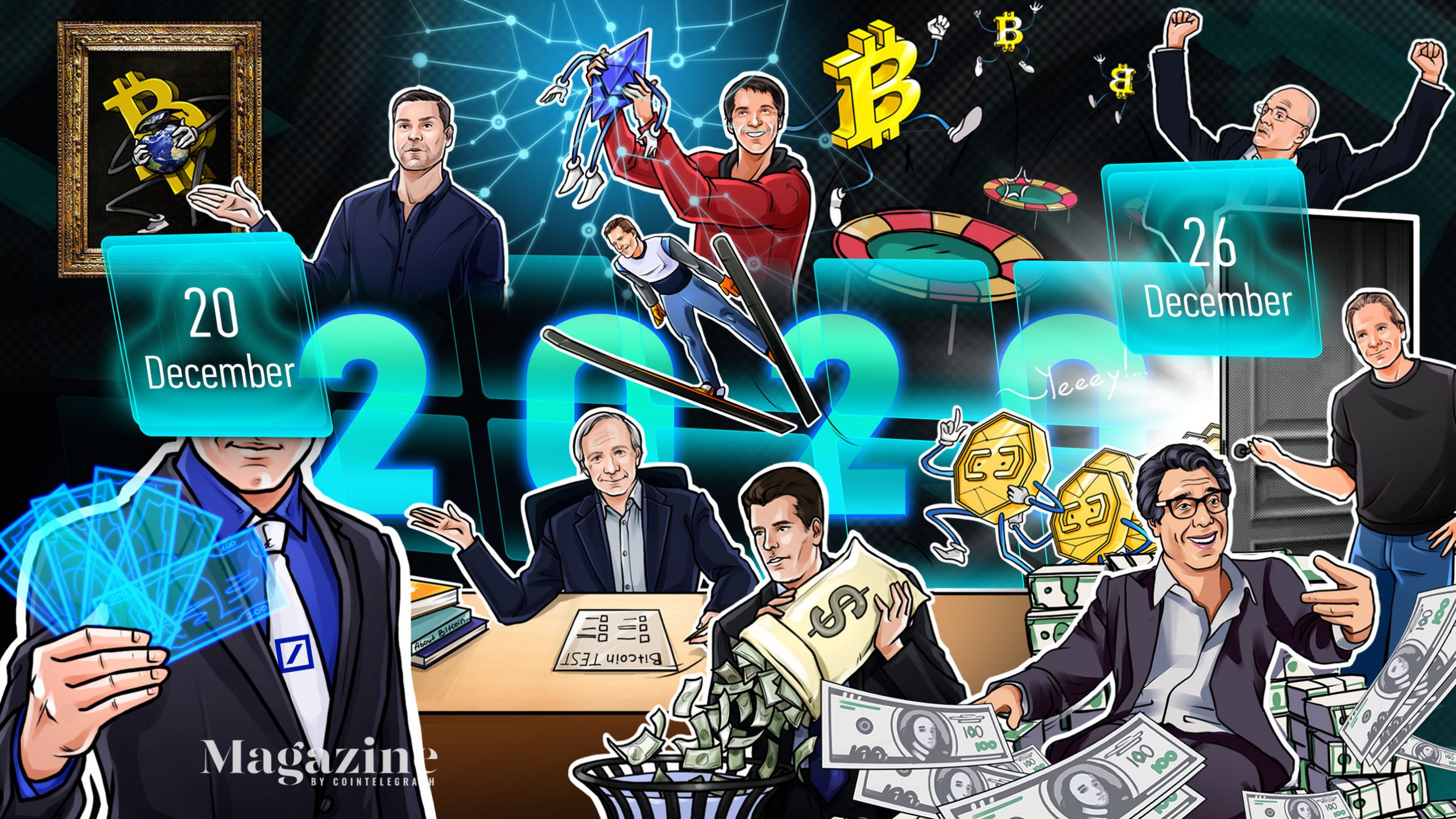 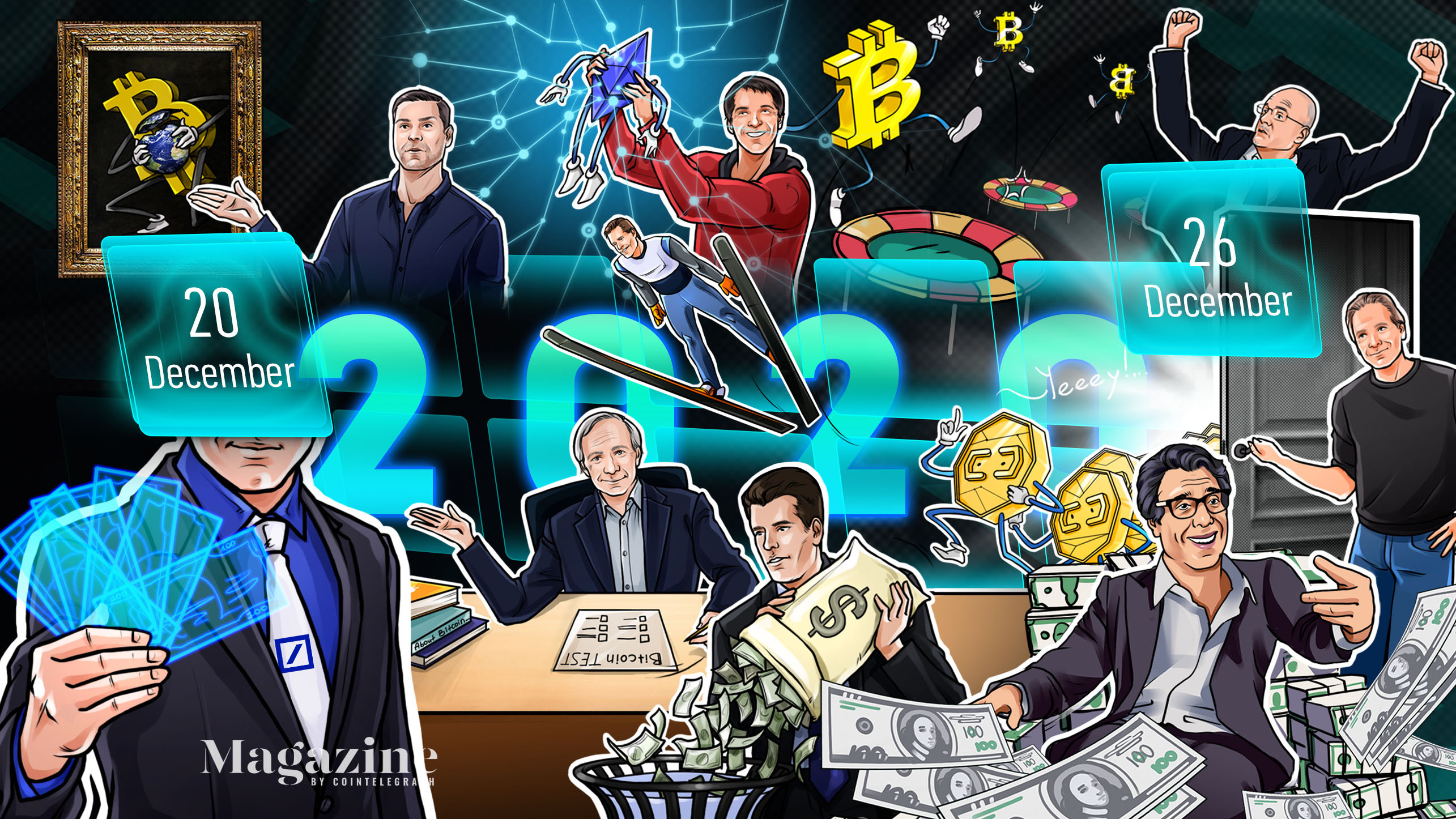 Without question, the biggest story of 2020 has to be Bitcoins dazzling return to $24,000 and beyond. Who would have thought this was possible back in March when BTC suffered an almighty flash crash that took it down to just $3,600?

Major altcoins were also basking in the glow of stellar returns this year. At one point this year, ETH was up 417% on where it started the year outshining BTC in percentage terms, even though its some way off record highs.

Litecoin investors will also be popping open the champagne after prices managed to treble in 2020 not bad considering it started the year at $40. And with all of these altcoins supported by PayPals crypto service, its very possible that their user bases will expand even further in 2021.

And who could forget DeFi an industry that barely existed 12 months ago. Over the course of 2020, the total value locked in these protocols has leaped up by about 2,000%.

But as this festive edition of Hodlers Digest was being written, one altcoin was suffering a rather spectacular fall from grace. The U.S. Securities and Exchange Commission announced it is taking legal action against Ripple alleging that the XRP token is an unregistered security. After achieving highs of $0.76 in late November, the altcoins value has plummeted, and on Dec. 23, it fell below $0.30.

Who did the most for real-world crypto and blockchain adoption in 2020?

The history books will describe 2020 as a watershed moment for cryptocurrencies, but which companies, governments and organizations made the greatest contribution to adoption?

PayPal naturally makes the list. In October, it confirmed that it was planning to integrate cryptocurrencies into its platform meaning that 300 million users would be able to buy, sell, hold and spend Bitcoin, Ether, Bitcoin Cash and Litecoin. The service is already available in the U.S. and is going to be rolled out next year.

Other big moments included the S&P Dow Jones Indices confirming that it will debut crypto indexes in 2021 officially bringing digital assets to Wall Street. A vast majority of top-ranking tokens are going to be included, in a move that could spur further institutional adoption in cryptocurrency.

The Supreme Court of India leaped to the rescue when it sensationally overturned the Reserve Bank of Indias ban on financial institutions working with crypto companies leaving many citizens unable to trade digital assets at all.

COVID-19 has also had an impact on cryptocurrencys adoption as millions of us were forced to shift to digital payments. As Ben Franklin once said: Out of adversity comes opportunity.

Publicly recanted! Luminaries who came to terms with crypto in 2020

Its exceedingly rare for public figures to perform a U-turn on remarks that they have made publicly. But Bitcoins dazzling performance this year has prompted several people to reevaluate their stance on cryptocurrencies.

In 2018, the economist Nouriel Roubini famously described crypto as the mother of all scams, dismissing blockchain as the most over-hyped technology ever. But in November 2020, he conceded that Bitcoin might qualify as a partial store of value.

Jim Cramer also realized the error of his ways after insisting that Bitcoin was not going to replace gold in 2017. In a segment on Mad Money at the time, he assured his viewers that the crypto craze was going to run out of steam. Fast forward three years, and hes far more bullish and full of praise for BTCs scarcity.

And with PayPal wading into the industry, PayPal CEO Dan Schulman deserves an honorable mention, too. As recently as 2018, he had said cryptos volatility made it unsuitable to be a real currency that retailers can accept. How things change. Within months, digital assets will be accepted by millions of its merchants.

Five times crypto got weird in 2020

Every industry, group, clique and conclave has its own share of weirdos cryptocurrency and blockchain are no exception.

John McAfee announced that he was going to run as the crypto candidate in the U.S. presidential election but ended up running his campaign abroad because the U.S. was pursuing him on tax charges. He threw in the towel in May and instead ran for the vice presidency under the Libertarian Party. That didnt go well, either.

Bitmain suffered a bitter power struggle that affected the companys basic operations, leading to one of its co-founders being ousted. Thousands of mining rigs went missing in Mongolia, and it seems that the drama is far from over yet.

In July, Twitter was crippled by a devastating hack that saw the pages of high-profile figures including Elon Musk, Kanye West, Joe Biden and Warren Buffett compromised. Their profiles ended up being used for a Bitcoin giveaway scam, with tens of thousands of dollars being sent to fraudulent addresses.

Things got even weirder when Trons Justin Sun appeared to offer a $1-million bounty to track down those responsible, but the company failed to follow through on its high-profile promise.

And all of this comes before we even discuss John McAfees bizarre promise to eat his own genitalia if BTC fails to hit $1 million by the end of 2020. Sorry, John, looks like that price target is a little off the mark.

Gifting crypto to loved ones this holiday? Educate them first

This year, cryptocurrency has seeped into the public consciousness like never before, with BTCs record surge making its way into the mainstream media. As a result, its little surprise that some crypto holders are planning to give digital assets as a gift this festive season.

Yet while the idea of gifting cryptocurrency to friends and family may sound appealing, there are considerations to take into account before sending them to your loved ones especially newcomers.

For those who are tempted to follow through with this idea, educating recipients on how to store their crypto safely is crucial. Some of the easiest ways to gift crypto can include gift cards and ATM vouchers, eliminating the need to go through an exchange that may be difficult for newcomers to use.

BitPay chief marketing officer Bill Zielke told Cointelegraph that 2021 may be the tipping point for crypto to become a cool gift to receive for special occasions.

Prediction of the Year

Here at Hodlers Digest, weve long brought you some of the industrys most outlandish price predictions. But just like a broken clock is right twice a day, there are times when some of these forecasts are bang on the money.

Mike Novogratz had threatened to hang his spurs if BTC failed to hit $20,000 in 2020, but he is now entitled to breathe a sigh of relief after this all-important milestone was reached.

As early as 2013, Bill Gates had warned that currency can get pretty inconvenient remarks that would prove timely as COVID-19 hastens the worlds transition to a cashless society.

And its also worth remembering that the Winklevoss twins have been banging the drum about Bitcoin being better than gold since 2016 when they put their case forward in the Financial Times. Fast forward to 2020, they now believe that BTC has the potential to wrestle away market share from gold and even achieve a price of $500,000 per coin.

Unfortunately, 2020 didnt exactly shake off cryptos reputation as being a honey pot for criminals and from January to October, some estimates suggest that losses from thefts, fraud and hacks totaled a whopping $1.8 billion.

There were also a number of high-profile figures who became embroiled in legal issues. BitMEX founder Arthur Hayes went missing after the U.S. Department of Justice filed criminal charges and he still hasnt been tracked down.

Meanwhile, John McAfee was detained in Barcelona over tax evasion charges levied by the U.S. government. He was also charged over fraudulently promoting a series of questionable crypto projects, from which he allegedly made millions of dollars. If convicted, he could face up to 30 years in prison.

And over in China, a staggering 109 people were taken into custody in connection with the PlusToken Ponzi scheme. In the end, 27 were accused of being the schemes masterminds, while the remaining 82 held smaller roles within the organization. In December, Chen Bo and 13 of his co-conspirators were sentenced to jail terms ranging between two and 11 years.

Cat got your tongue? Bitcoin critics wither in 2020

Compared with other bull run years such as 2017, 2020 has seen much less crypto criticism with a number of Bitcoin naysayers appearing to soften their stance toward digital assets.

Prominent naysayers like Warren Buffett, Bill Gates and Donald Trump have largely remained silent about Bitcoin and crypto this year. Nobel Prize-winning economist Paul Krugman, who predicted a total collapse of Bitcoin in 2018, refrained from commenting as well.

According to data by major Bitcoin-themed website 99bitcoins, 2020 has been the year with the lowest Bitcoin obituary rate since 2013.

Only seven cases of Bitcoin death were reported in media monitored by 99bitcoins, compared to 41 obituaries in 2019 and 93 in 2018.

Bitcoin FOMO? Tesla and these stocks crushed BTCs gains in 2020

Bitcoin has wowed investors with all-time highs and year-to-date returns of over 200% but there are stocks that still beat it.

As of Dec. 22, Peloton Interactive has secured dazzling annual returns of 384% as lockdowns forced many of us to exercise at home instead of in a gym.

Unsurprisingly, Moderna has also skyrocketed because of its involvement in developing a coronavirus vaccine up 619%.

Zoom became a household name overnight when lockdowns began being imposed, with its stock racing up 495% year to date.

And of course, who could forget Tesla, which has stubbornly shrugged off any suggestion of a bubble and is now a member of the S&P 500? BTCs gains pale in comparison to the 850% year-to-date gains TSLA has enjoyed this year.

As a developing tech power, China is one of the fastest countries in adopting blockchain technology.

Andrew Thurman takes a look back at the biggest names and the strongest voices that cheered crypto on throughout 2020.