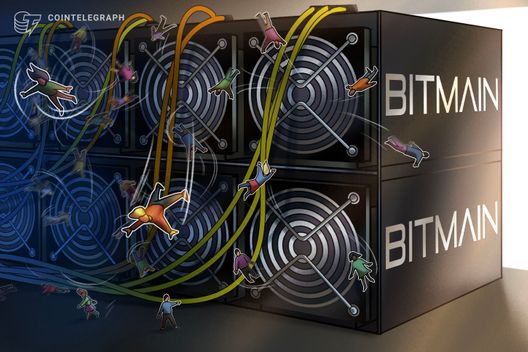 Bitmain’s CEOs might be stepping down because of the bear market.

On Jan. 10, news emerged that Chinese Bitcoin mining giant Bitmain’s co-founders, Jihan Wu and Micree Zhan Ketuan, will step down as co-CEOs of the company. The move follows a streak of reports suggesting that Bitmain has been facing mass layoffs, class action lawsuits and difficulties related to its initial public offering (IPO) during the last quarter of 2018. So what exactly is happening with one of the world’s most influential crypto outfits?

Bitmain was founded in 2013 by Jihan Wu and Micree Zhan Ketuan. Prior to that, Wu was a private equity fund manager who studied economics and psychology at Peking University, while Zhan, a graduate of the Chinese Academy of Sciences, was trying to raise funds for a startup that allowed users to stream television shows to a computer screen via a set-top box.

After discovering Bitcoin (BTC) in early 2011, Wu allegedly spent all his life savings to buy the cryptocurrency. When the Bitcoin’s price soared in 2013, he decided not only to trade the digital asset, but to create it as well. Wu asked Zhan to join him, and together they began developing an ASIC chip that would mine BTC at maximum efficiency. In November 2013, Zhan, the duo’s technical mastermind, presented their first mining rig, the Antminer S1, and Bitmain’s sales took off.

According to Wu, the company experienced a difficult period close to the end of 2014, when the infamous Mt.Gox crash happened and the whole crypto market collapsed. The situation eventually stabilized when BTC’s price began climbing up again the next year. Consequently, when the 2017 crypto boom kicked in, the business became extremely lucrative.

Thus, Bitmain booked $2.5 billion of revenue in 2017 alone, as Wu told Bloomberg, while this year turned out to be even more profitable: According to the company’s prospectus, its revenue was set at $2.8 billion by the end of June 2018. According to a different report issued by investment research company Bernstein, Bitmain made between $3 billion and $4 billion in operating profit in 2017 and allegedly outraced Nvidia, which made about $3 billion during the same period.

In May 2018, Bitmain announced its expansion to the area of artificial intelligence (AI), where it planned to compete against Nvidia, Intel and AMD using its existing chip designs to power AI systems and software. The plan was disclosed against the backdrop of increasing scrutiny regarding crypto mining operations in China. “As a China company,” said Wu, “we have to be prepared.” He added that Bitmain plans to start earning as much as 40 percent of its revenue from AI chips within five years.

Sales of Bitmain’s mining chips and circuits reportedly account for around 70 to 80 percent of the whole market. As per the company’s LinkedIn page, Bitmain is currently headquartered in Beijing and employs around 2,500 people across the world. However, it is unclear whether this information is up to date, considering the recent reports regarding job cuts.

As of January 2019, the two mining pools operated by Bitmain, AntPool and BTC.com, contribute to almost 23 percent of the total hashing power of the entire Bitcoin mining pool. However, just six months ago, the company’s mining pools represented 41 percent of the market share, meaning that its share has been steadily declining. Indeed, the bear market has been taking its toll, and 2018 turned out to be a problematic year for the mining giant.

According to a BitMEX Research report released on Aug. 30, Bitmain sold a lot of its mining units at a loss throughout 2018. The paper suggested that it was a deliberate strategy “to squeeze out [Bitmain’s] competition by causing them to experience lower sales and therefore financial difficulties”:

As previously noted by Cointelegraph, at the time the BitMEX research was published, the price of Bitcoin was hovering around $7,000, which was still above the breakeven cost of mining. Therefore, the demand was likely to be there, which would make the Bitmain’s price war justified. However, when the full-blown bear market hit in November, and the price of Bitcoin fell below the breakeven cost of mining of $6,900, Bitmain should have started to experience harsher financial difficulties due to lesser demand for mining devices.

One of the most evident signs that Bitmain’s business has taken a hit are the reported layoffs. On Dec. 26, Hong Kong newspaper South China Morning Post (SCMP) quoted Bitmain’s alleged statement regarding internal job cuts. The announcement reportedly read:

“A part of [building a sustainable business] is having to really focus on things that are core to that mission and not things that are auxiliary. As we move into the new year we will continue to double down on hiring the best talent from a diverse range of backgrounds.”

As SCMP noted, the exact number of layoffs had not been disclosed, but a spokesperson for the firm reportedly denied that Bitmain would lay off over half of its employees, a suggestion first circulated in Chinese social media.

On Dec. 10, Israeli business news outlet Globes reported that Bitmain was closing its local development center and firing its employees. Dubbed Bitmaintech Israel, it was founded in 2016 to explore the use of blockchain, work on the Connect BTC mining pool, and develop the infrastructure behind Bitmain’s AI project titled “Sophon.” All 23 employees were fired, along with Gadi Glikberg, head of the Israeli branch as well as Bitmain’s vice president of international sales and marketing. Glikberg linked the layoffs to the crypto market collapse:

“The crypto market has undergone a shake-up in the past few months, which has forced Bitmain to examine its various activities around the globe and to refocus its business in accordance with the current situation.”

Finally, according to a series of yet-to-be-finally-confirmed reports, changes occurred even at the senior level of the mining giant. Thus, on Jan. 10, SCMP wrote that both Bitmain’s co-founders, Jihan Wu and Micree Zhan Ketuan, will quit their posts as co-CEOs, but still steer the company’s important decisions. Citing “people familiar with the matter,” the media outlet said Bitmain’s director of product engineering, Wang Haichao, would likely take over as CEO at an unspecified future date, while he has allegedly already taken over some of the duo’s former duties. According to the September IPO filing, Wu and Zhan control 21 and 37 percent of the business respectively.

In June 2018, media started to report that Jihan Wu was planning to conduct an overseas IPO  in a market with United States dollar denominated shares — like Hong Kong — as it would allow early backers to cash in funds. An IPO is a more traditional and regulatory-friendly way for a company to seek investments from a broader audience in the public market, which Cointelegraph has covered in depth before.

Later in July, a research unit for crypto exchange BitMEX analyzed alleged leaked data on Bitmain’s potential IPO and stated that the mining giant had conducted a pre-IPO round that reportedly raised around $14 billion, leading them to believe that it could raise no less than $20 billion at the IPO stage.

Nevertheless, as Cointelegraph reported earlier, there had been a lot of rumors and uncertainty around Bitmain’s upcoming IPO. In December, they were reignited by Hong Kong-based newspaper SCMP, which reported that the Hong Kong Stock Exchange (HKEX) is reluctant to allow Bitmain to conduct an offering in the city.

According to the publication’s anonymous sources, the regulator thinks it is “premature for any cryptocurrency trading platform – or business associated with the industry – to raise funds through an IPO in Hong Kong before the proper regulatory framework is in place.” As a result, SCMP suggests current conditions “could be an insurmountable hurdle” for Bitmain and other cryptocurrency companies planning to launch an IPO. Similarly, in November, HKEX lapsed the IPO application of Canaan, Bitmain’s competition on the mining market, which also was going to hold an offering there. Now, the company is looking to move its IPO plans to New York.

Interestingly, just a day prior to the SCMP article, the HKEX told Cointelegraph that any reports regarding hesitation on the part of Bitmain were “rumors,” suggesting that negotiations between the regulator and the mining giant were in progress.

In addition to staff cuts and other problems, Bitmain seems to be facing at least two class action lawsuits. The first one was filed by Los Angeles County resident Gor Gevorkyan, who allegedly purchased their devices, including its S9 Antminer machine, in January 2018. According to the filing submitted to the North District Court of California in November, the product was “difficult to configure” and lapsed during a “substantial amount of time.” Gevorkyan claims that before he could fully initialize the devices, they operated at cost-intensive “full power mode” at his expense. The plaintiff is seeking damages in excess of $5 million on behalf of all miners “similarly situated” as Bitmain clients.

The more recent lawsuit was initiated by UnitedCorp, a development and management firm with a focus on telecommunications and information technologies. On Dec. 6, it reported suing Bitmain along with Bitcoin.com, Roger Ver and the Kraken exchange, which reportedly planned a scheme to take control of the Bitcoin Cash (BCH) network during the November hard fork.