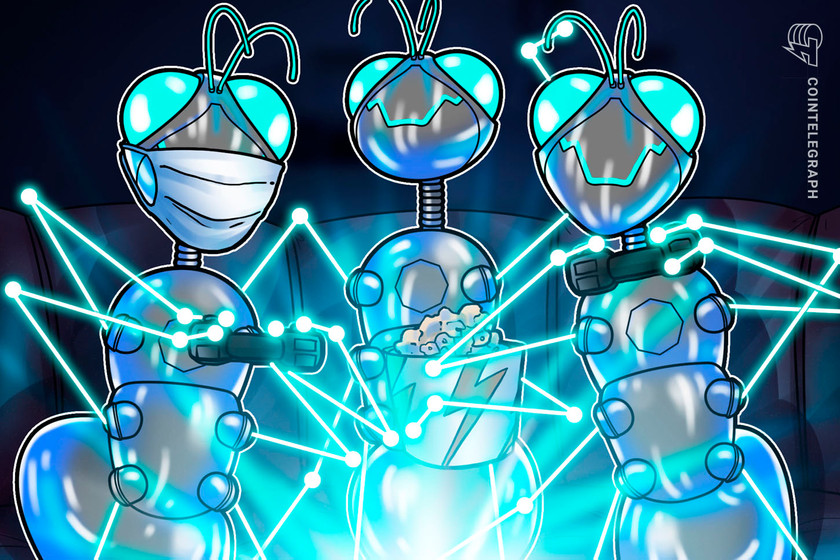 While it may seem like an expensive game, it is actually a relatively cheap way to get involved in NFT investing.

The Pokemon-inspired Axie Infinity has grown to become the number one nonfungible token, or NFT, game on the Ethereum blockchain, with over 7,000 on-chain active monthly users.

This week saw the launch of its $2.97 million Axie Infinity Shards (AXS) governance token sale on Binance Launchpad, so Cointelegraph got deep down and dirty with the game to see what all the fuss was about.

To get started you need at least three Axies. These are the creatures that you will collect and use in PvE (player versus environment) and PvP (player versus player) battles when playing the game.

The least expensive individual Axies available on the marketplace at the moment cost the equivalent of just over $20 in Ethereum (ETH). This will mean that you currently need to spend as much to play Axie Infinity as you would to buy a next-gen console game.

Bear in mind that the attributes of your Axies will also mean the difference between winning and losing battles, so you almost certainly wouldn’t just want to buy the cheapest ones you find.

Now you may be thinking, “who in their right mind would spend $70 plus on an off brand Pokemon game?”

However, this may not be a completely fair comparison. After all, you don’t have the opportunity to potentially earn a living playing Pokemon, esports tournaments notwithstanding.

Pay to Win to Earn

Instead, Axie Infinity belongs to a new breed of games only made possible with blockchain technology. These combine elements of both Pay-to-Win (or perhaps more generously, Invest-to-Win) and Play-to-Earn, and which I am hereby officially coining Pay-to-Win-to-Earn, or P2W2E.

In many ways these games share more in common with cryptocurrency investing than, say, the latest Call of Duty blockbuster.

Your initial investment buys you a ticket to a world where your own time, skill, and effort can influence its value, rather than the vagaries of traditional cryptocurrency markets. That’s a compelling proposition for many players.

Those who are only interested in playing the game may prefer to wait for the full release, which will also include a free-to-play mode. Funds raised during the token sale will be used to develop the game from its current alpha state, for a mainstream release in 2021.

Developer Sky Mavis kindly donated three Axies so that I could test the game. These covered each of the three main roles: a tank to soak up hits, a fighter to deal serious damage, and a nimble Axie for quick strikes.

Let’s take a closer look under the hood

This is where it gets a bit more complicated.

Each Axie belongs to one of six classes (plus three so-called secret classes). These are split evenly to (roughly) correspond to each of the aforementioned roles. These then follow a sort of rock-paper-scissors scenario where each role is strong against one and weak against the other.

In addition, each Axie has six body parts which can also each be one of the six classes. The combination of these body parts determine both the overall stats of the Axie, and which cards it will have available to play in battle.

You will find that “purer” breed Axies are often preferred, as abilities and stats tend to stack, creating stronger “specialists” rather than generalists.

This section will mainly focus on the PvP element of the game, as that is where most of the skill and action is. The PvE adventure follows the same(ish) battle format, although it basically amounts to grinding through levels to beat ever more difficult AI opponents.

At the start of a battle your gallant team of three Axies, armed only with three energy points and six play cards, squares off against the opponent’s similarly equipped team.

Each turn allows you to spend energy points by playing cards. Most of these requiring one energy point to play, but a few require more, and some are completely free. You only get two new energy points and three new cards each turn, so spend wisely.

Cards have a defensive and offensive score, along with an additional effects such as heal, buff, and energy. These can come into play if certain other parameters are met, such as combos, buffs, and last stands.

Play order is determined by the Axies’ speed stats, and the target of each card is generally the closest Axie to the attacker. However, both of these things can change through the application of certain card effects.

Like many of the best games, the mechanics are easy to understand, but difficult to master.

After warming up by beating a few AI baddies in PvE, I decided to dip my toe into the PvP arena.

While by no means completely useless, my donated Axies (and my skill in manipulating them) were no match for the thoroughbred creatures (and owners) that I faced in battle.

Time and time again, my Axies’ proverbial backsides were handed back to them on a virtual plate. More dishearteningly, it seemed that every team I faced was faster (so went first), stronger (so could take/dish more hit points), and had more energy (so played more cards).

After much perseverance however, I did eventually manage to win a few rounds. I would love to believe that this was down to my developing mastery of the game, but in honesty it was probably just as much because I’d been matched with some fellow newbies.

I’m in the mood for love

Winning battles nets you Small Love Potions , or SLPs, which are needed for breeding new Axies.

Each Axie may breed a maximum of 7 times, with an increasing number of love potions needed for each subsequent procreation attempt.

Virgin Axies (such as mine) require just 100 SLP to breed, whereas the seventh son (or daughter if you prefer) of an Axie comes at a cost of 1,300 SLP. Note that this is per parent, and you need two parents to tango as it were.

The form of the resulting bundle of Axie joy will be determined by the genetics of the parents, who have dominant, recessive, and minor recessive genes for each body part.

I made it my mission to breed at least once, and after about 5 hours of playtime across two days (hitting my daily task twice) bagged the 200 SLP I needed and an extra 43 for good luck.

I then read this guide on breeding and swiftly decided against it.

If I didn’t already feel bad enough about holding (albeit virtual) creatures hostage and making them fight each other for money, indulging in what basically amounted to eugenics was a step I wasn’t willing to take.

Luckily, small love potions are also freely tradable on Uniswap. The 243 SLP that I earnt are currently worth around $7 (although prices did spike a couple of days ago which would have bagged me $20).

Equally, I could just swallow my pride (and most of my virtual moral values) and use the SLP to breed the Axies I have, selling the perfectly imperfect offspring for a minimum of $20.

Split between my five hours of playtime, that gives $4 per hour. Not an earth-shattering wage in the U.S. and Western Europe, but still pretty respectable in a lot of countries, and an absolute fortune in parts of the developing world.

This is a genuinely incredible thing and a literal game-changer. Forget sponsoring a goat for a needy family for Christmas. Buy some Axies! Coupled with a cheap Android smartphone, the underprivileged can now become fully self-sufficient.

[NB: the game is also available on Windows, Mac and iOS devices]

Axie Infinity is that most curious of things, in that it feels like the start of a truly new paradigm.

The gameplay isn’t going to blow you away, but there is certainly enough there to be fun. And the deeper into strategies and tactics you go the more hooked you can become. The game is still in alpha and there are new elements still under development, such as land ownership.

My experience was admittedly somewhat frustrating at times, but I wasn’t really playing in the spirit that was intended. Plus, cards are still being balanced through the alpha stage, so it should become easier for newbies (at least those who are prepared to invest a bit of money) to start on an even keel.

One message on the game’s Discord channel suggested that $200 was needed for the game to become really fun. I’d argue that an initial investment could be around half of that if you are prepared to put in a bit of grind.

The fact that even my few hours of bumbling through a bunch of battles produced a pretty decent return is astonishing.

More investment, research and skill could see some serious profit. The most expensive Axie so far sold went for 200 ETH ($75,000), but there are some listed on the marketplace for over $1 million.

Blockchain gaming is growing up, and Axie Infinity gives us a tantalising glimpse of what it could become.

It may not be the game that brings hardcore gamers to the blockchain, but it certainly does a great job of making crypto and NFT investing fun.