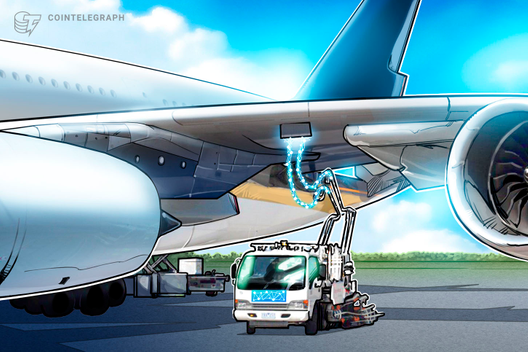 In an era in which catching a flight is easier than renting a car, and an estimated 40 million flights will occur this year alone, it is understandable that competition is fierce, and even the smallest advantage may be the difference between leading the industry and being forced into an unwanted merger.

Last year, Cointelegraph discussed the potential benefits the blockchain industry can have for airlines. Fast-forward 12 months and the waves this technology is making not only for airlines but also air travel and the aviation industry as a whole can be clearly seen. We have gone from a period in time in which competitors see the potential into an era seeing blockchain applications being regularly announced around the world. In fact, executives from some of the largest airlines are publicly stating the priority of blockchain integration — the latest from Norwegian Airways, as it announced the launch date for its cryptocurrency exchange, NBX. Managing director of the exchange, Kjos-Mathisen, said in an interview to a local news source:

“First, the marketplace will be launched. Then NBX will make a payment solution for the airline so that airline customers can pay with virtual currency.”

Blockchain is more than just payments

One of the largest drivers for many customers when selecting their airlines is the loyalty program associated with said airlines and how this integrates with other facets of their lives. Almost every aspect of the retail world has taken advantage of reward systems, ensuring maximum customer retention occurs throughout their network. Singapore airlines is one of the first movers to incorporate blockchain into its loyalty app, with the imminent release set for August 2018.

KrisFlyer signed up Singapore Airlines as its first retail partner to utilize its new digital wallet app, following successful a proof-of-concept exercise in partnership with KPMG Digital Village and Microsoft. Singapore Airlines CEO Goh Choon Phong was quoted in the Press Release regarding the unveiling of the program, saying:

“This groundbreaking development in which we will be using blockchain technology to ‘digitalise’ KrisFlyer miles is a demonstration of the investment we are making to significantly enhance the digital side of our business for the benefit of our customers.”

Singapore Airlines, with a revenue of over $12 billion, has a large share in the global aviation market and is one of the oldest airlines — dating back to 1947 — and is now pushing for digital innovation. Goh went on to explain, “It is in line with our recently unveiled Digital Innovation Blueprint, under which we aim to be the world’s leading digital airline.”

Aviation IT provider Sita’s senior manager, Sherry Stein, who has worked with many organizations to realize the potential blockchain has on its specific business application, explained:

“If you want to cash in your miles on car rental, for example, blockchain allows transactions to happen seamlessly and instantly, updating all the stakeholders without dependency on offline review and reconciliation processes. The key rationale for loyalty programmes is to help airlines provide differentiated value or experience that improves customer retention. When we look at technologies that can help, blockchain is a perfect fit and the reason why we’re looking closely at how to leverage its many benefits.”

Cathay Pacific has also jumped on the bandwagon with a new campaign called “Unlock More Miles” with a blockchain foundation powering it, as its general manager of IT solutions, Lawrence Fong, said:

“We are pleased to partner with Accenture and we will continue to leverage its technology to develop more applications that our customers value. As a start, we are very excited by the first offering resulting from our co-operation — the marketing campaign launched by Asia Miles which we expect to be well received.”

Blockchain can’t find my booking — said no one ever

Another direct impact that has already seen large improvements from blockchain application revolves around the complicated booking process created by many third-party websites connecting to multiple websites for airlines, hotels and cruises.

In February 2018, Webjet announced its release for blockchain platform Rezchain to handle booking disputes and reconciliations. An estimated 3% to 5% of bookings are disputed in some form. Webjet’s managing director, John Guscic, explained the fundamental thinking behind Rezchain:

“In a low margin, high transaction volume business, it is essential to find ways to be more efficient and eliminate administrative burdens that add no value. It was this fundamental principal has led to the development of Rezchain.”

Webjet says for one in 25 bookings, travel service providers do not get paid for their services. Its blockchain solution has already seen adoption from travel companies in Europe and Southeast Asia.

“While we are still exploring its benefits, blockchain may offer a streamlined way to retail airfares and ancillary products alongside our current channels. In removing complexity from the sales chain, customers benefit from reduced transactional costs, and airlines benefit from swift and secure sharing of information.”

LockTrip states that its solution provides bookings cheaper than Booking.com and Airbnb by up to 20%. Earlier this year, the U.S. Securities and Exchange Commission (SEC) issued its first “No-Action” letter clearing TurnKey Ket Inc. to sell tokens in the U.S. As explained in its letter to the SEC, the company aims to issue tokens that “are redeemable for air charter services, similar to the business jet card programs that are common in the aviation industry.”

According to independent research by Aelf blockchain, in the first quarter of 2019, almost 900 companies from 29 different industries were found to have made some announcement relating to their interest or adoption of blockchain technology. Of these companies, the largest industry, ahead of the finance industry, was supply chain and logistics, with approximately 300 companies including Forward Air and RTWAir.

One key outcome from the research identified that the transport and logistics industry is very intertwined with blockchain through strong connections between air, road and sea travel, which accounts for 31.5% of use cases of the technology. 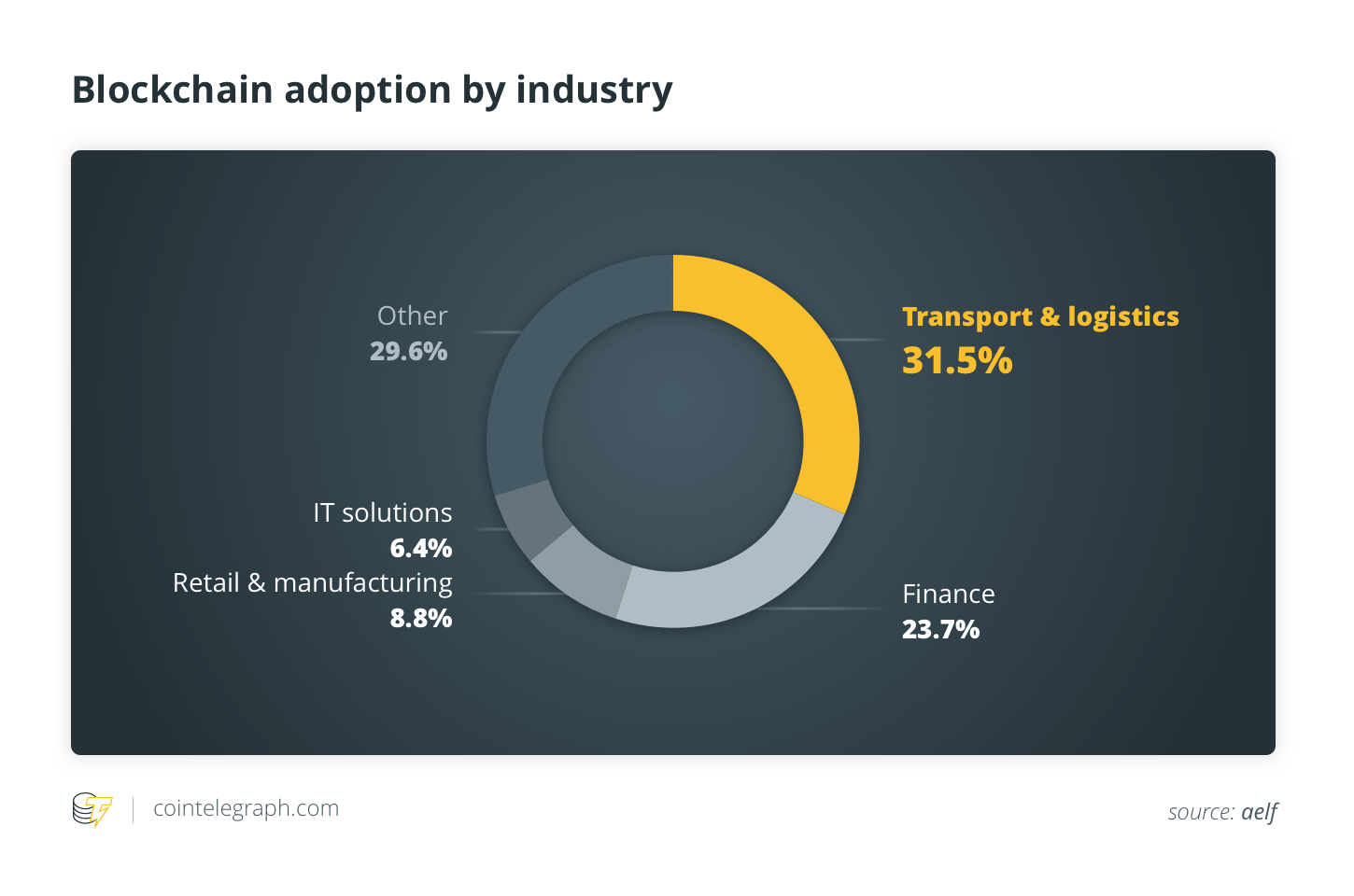 With the introduction of blockchain solutions, quality in manufacturing and distribution of aircraft components and materials can be managed in a smoother and more effective manner. This concept has also been taken and introduced into other aspects of logistics, including aircraft maintenance, air accident reduction and luggage tracking.

Air France KLM has been researching blockchain to track its maintenance and repair systems while a Cyprus-based startup, Aeron, manages a mobile app that records and verifies a pilot’s qualifications, replacing a traditional pilot logbook. Through this approach, the team hopes to reduce the number of air accidents that result from poor record keeping.

Air New Zealand has also announced its research in cargo and baggage tracking. Rega, a blockchain insurance platform, has taken a different approach to blockchain utilization in regard to lost baggage. It uses blockchain to create a “crowsurance” platform in which the risk of lost baggage is shared across the community. By using this approach, it has been able to reduce costs to only approximately $12 annually for insurance coverage of up to $5,000.

The aviation industry supports $2.7 Trillion (3.6%) of the world’s gross domestic product and carries over 4 billion passengers and 60 million tonnes of freight annually, according to International Air Transport Association.

The giants in this industry have embraced blockchain technology with open arms and have quietly applied it to multiple aspects of their networks faster than some industries that have simply accepted the technology is here to stay. Not only does this improve the experiences and reduce costs for customers around the world, but it brings validity and a reputable image of the technology to other industries and organizations.