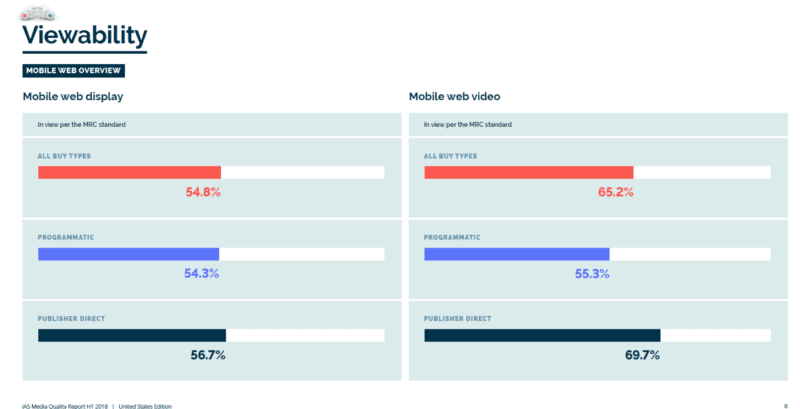 Integral Ad Science (IAS) released a media quality report for the first half of the year (registration required) this week that shows a slightly more optimistic picture of an industry that’s been beleaguered by challenges in viewability, ad fraud and brand safety for the past few years.

Overall, the industry is seeing a healthy jump in viewability, based on IAS’s view across its customer base.

Desktop programmatic display viewability was at 58.6 percent, up 10.7 percent since the second half of 2017. Desktop video ad viewability had a smaller improvement (66.3 to 68.4 percent), a higher overall rate than display, which IAS notes is a function of being placed on high-viewability pages.

The report also found that ads that have been optimized against ad fraud have remained fairly steady since last year.

Why you should care

Coming off a few years wrought with fears about programmatic advertising, even a slight uptick is reason for marketers to rejoice. Buying directly from the publisher doesn’t seem to offer any real protection against ad fraud, for example, with video ad fraud rising 2.3 percent in both categories. Still, publisher-direct display ads had the lowest level of brand safety risk with benchmarks of 4.7 percent on desktop and 6.2 percent on mobile web.

Differences were more clear in analyses of desktop versus mobile, and video versus display. Video ads in general are viewable longer than display, generating an average time-in-view of 14.42 seconds — 36.3 percent longer than desktop. Similarly, mobile video had an average of 13.89 seconds ad view time — a whopping 87 higher than mobile display.

IAS notes, “Direct buys have traditionally led to higher viewability and that remains true on average. However, we see that programmatic viewability continues to improve and may eventually reach parity with publisher-direct inventory sources.

It’s important to note that this is the first time that IAS has included time in-view metrics in the report, showing an increased interest in additional viewability metrics, a trend further solidified by Google’s announcement Wednesday that advertisers who want viewability criteria higher than that provided by industry-standard Media Rating Council (MRC) can now set up custom viewability metrics in its enterprise platform Display & Video 360.

“As we’ve been studying how to better dimensionalize attention over the years, we have found that shifting the focus from impressions to time-based metrics can make a real impact for advertisers,” Scott Knoll, IAS’s chief executive officer, said in a release announcing the report. “Exposure time directly impacts the effectiveness of campaigns. …This data offers advertisers foundational benchmarks for better understanding consumer attention moving forward.”

More from the report