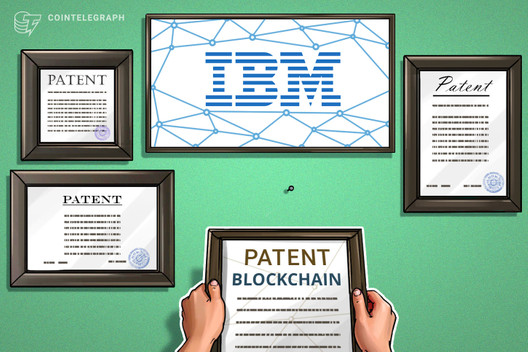 Tech giant IBM cemented its patent leadership in the U.S., with over 9,000 received patents, including in AI and blockchain, in 2019.

Tech giant IBM cemented its patent leadership in the United States, with over 9,000 received patents, including in artificial intelligence (AI) and blockchain, in 2019.

With the 9,626 patents secured, IBM became the company that received the most patents in the U.S.ever and the leader on the list for the 27th consecutive year, tech-focused media outlet Database Trends and Applications reported on Feb. 4.

Of the 9,626 patents, IBM secured over 1,800 patents in AI, more than 2,500 patents in cloud technology and led in blockchain patents received.

Back in July 2019, Cointelegraph reported that IBM had tripled the number of blockchain patents secured in the U.S. since 2018, boasting over 100 active patent families at the time. That made IBM’s growth in U.S. patents the largest of 2018.

At the time, Yuval Halevi, co-founder of crypto and blockchain PR company GuerillaBuzz, commented: “In just 1 year the number of IBM blockchain patents has grown by 300%. When one of the largest companies in the world (366,000 employees) spends so much of their resources on developing a blockchain department, this tells a lot about the market potential.”

Just recently, IBM was awarded a patent for the development of a “self-aware token” designed to track and record events of offline transactions. Last year, IBM added to its stack of blockchain patents an application that aims to improve the security of permissioned blockchain networks and an application that focuses on database management using blockchain, among others.

The news comes amid the so-called battle for the blockchain dominance between the U.S. and China. As an analysis for Cointelegraph published in late November 2019 showed, China was already winning the Intellectual Property arms race against the U.S.

The authors of the analysis examined blockchain-related patents that had been granted from January 2014 to October 2019 by China’s patent office, the National Intellectual Property Administration, or CNIPA, and the U.S. Patent and Trademark Office, or USPTO. During that period, the CNIPA awarded 2,218 blockchain patents compared to 227 by the USPTO.

Meanwhile, the NIPA in China was set to issue clarified guidelines for blockchain patent applications on Feb. 1.