Ethereum is still in a bear market even as Bitcoin continues to post amazing gains. When will the tables turn for the largest altcoin by market cap?

Nowadays, it seems everyone is bearish on Ethereum and its Ether token (ETH) except for Placeholder VC partner Chris Burniske, who, earlier this week, made the case for why he believes ETH/USD is a great long-term investment.

According to Burniske, the oft-cited narrative that the implosion of the ICO market led to Ether losing its use case is not entirely accurate. Rather, he posits that Ether is going through its first “mainstream bear market, just as Bitcoin did in 2014-2015.”

Given that hindsight always provides one with a clearer picture of the general trend, Burniske points out that 2014-2015 was the optimal risk-reward period for investors seeking Bitcoin exposure.

While all of this sounds encouraging, Burniske’s assessment goes very much against the grain of current investor consensus and the plethora of bearish signs exhibited on multiple time frames.

Ether and Litecoin (LTC) turned bullish in September 2018 and both foreshadowed what was to come from Bitcoin, which at the time was locked in a tight range around $6,500. As shown by the 3-day Moving Average Convergence/Divergence Oscillator (MACD), Ether’s impressive bull run appears to be over. 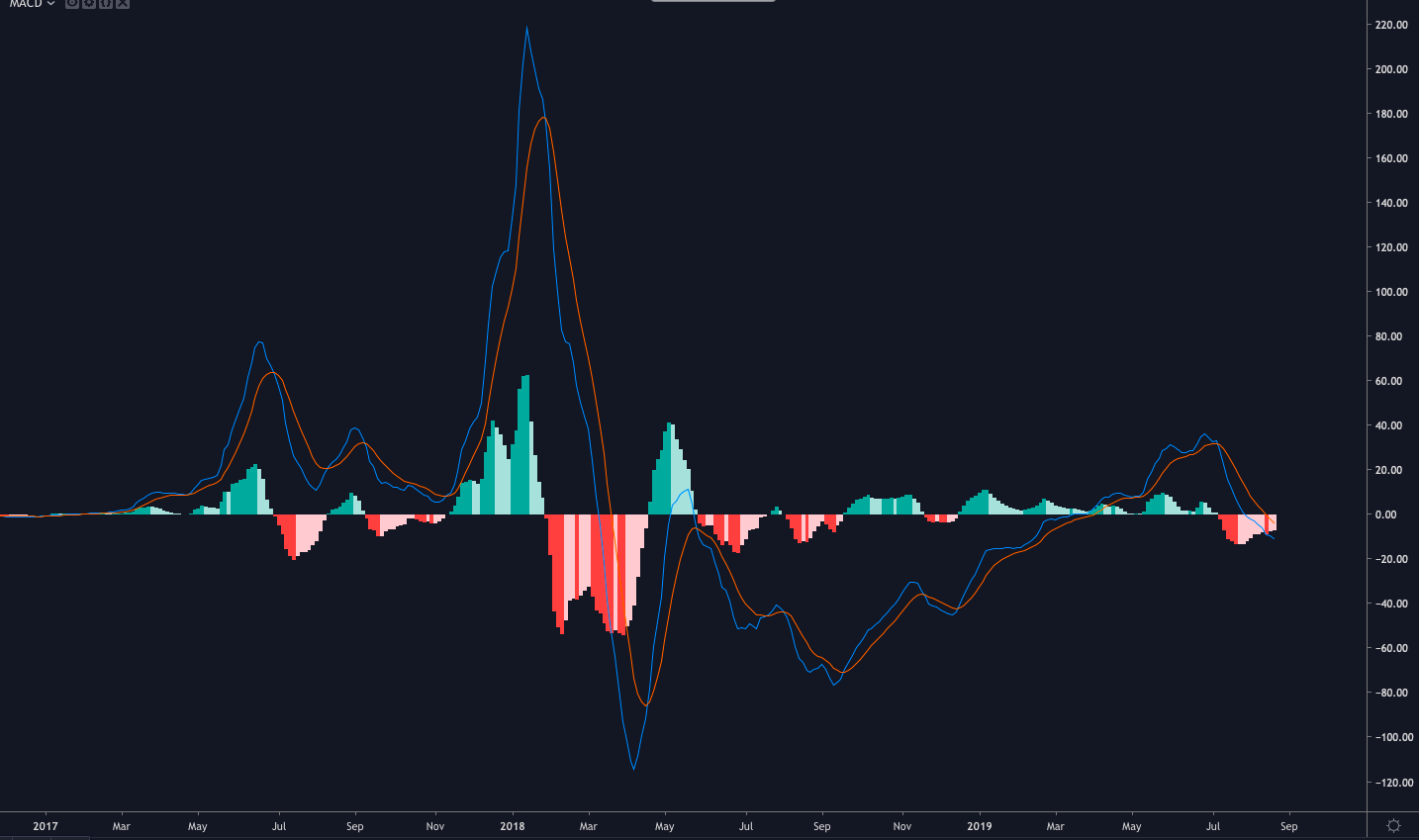 The MACD crossed below the signal line and dipped below 0 shortly after Ether topped out at $364. According to the negative histogram, it’s been downhill ever since. 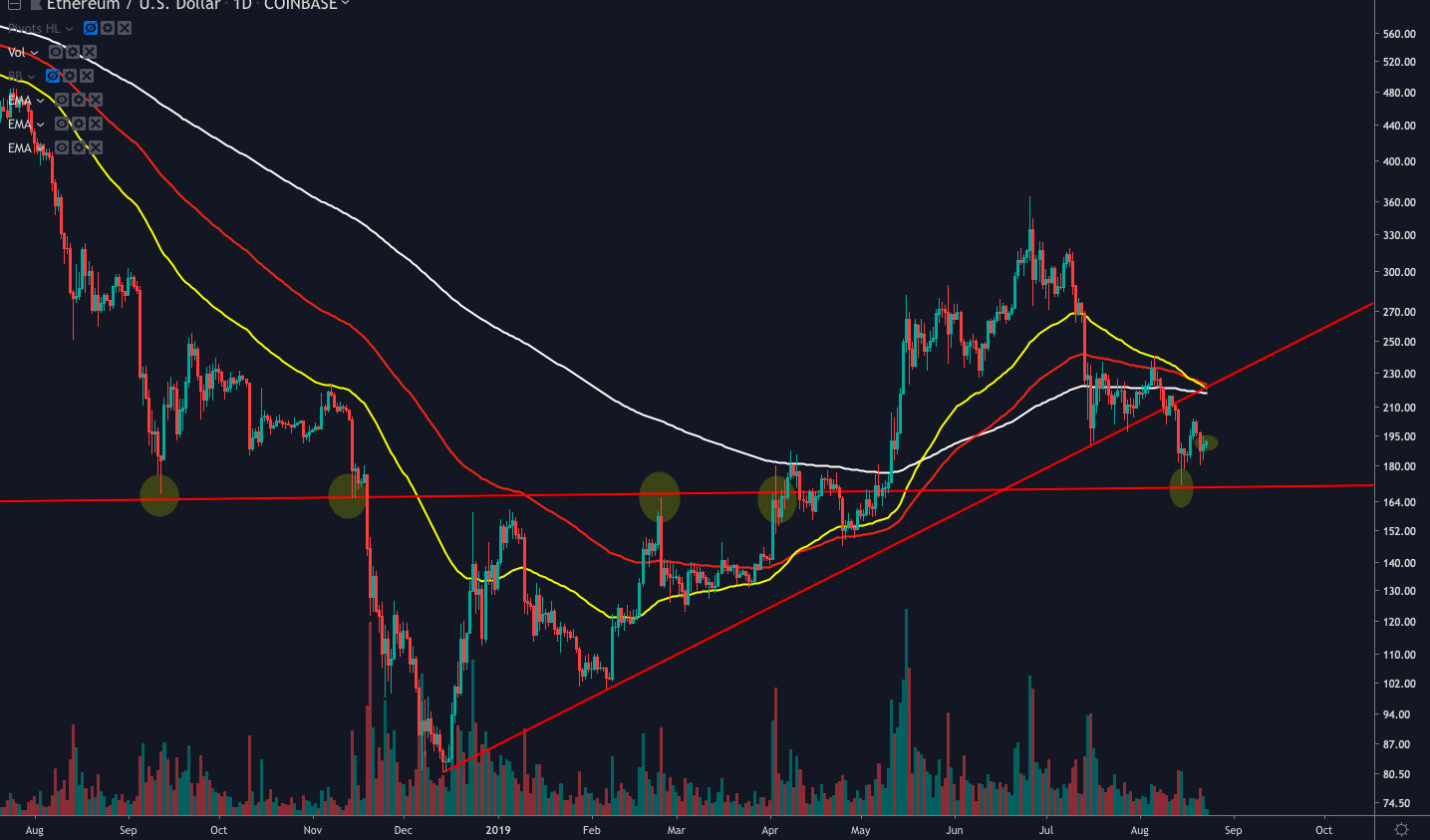 The 55-day moving average (DMA) has also dropped below the 100 DMA, while the 100 DMA is also on the verge of crossing below the 200 DMA on the daily time frame.

Daily volume is also screeching to a halt as Bitcoin’s dominance continues to rise and Ether’s dominance rate amongst altcoins has dropped from 10.53% to 7.76% over the past 3 months.

Selling volume is outpacing buying volume on the weekly timeframe and the ETH/USD pair is fast approaching the weekly support at $170. Below this is a precipitous drop to $100, then $80, both of which would be very unappetizing for investors. 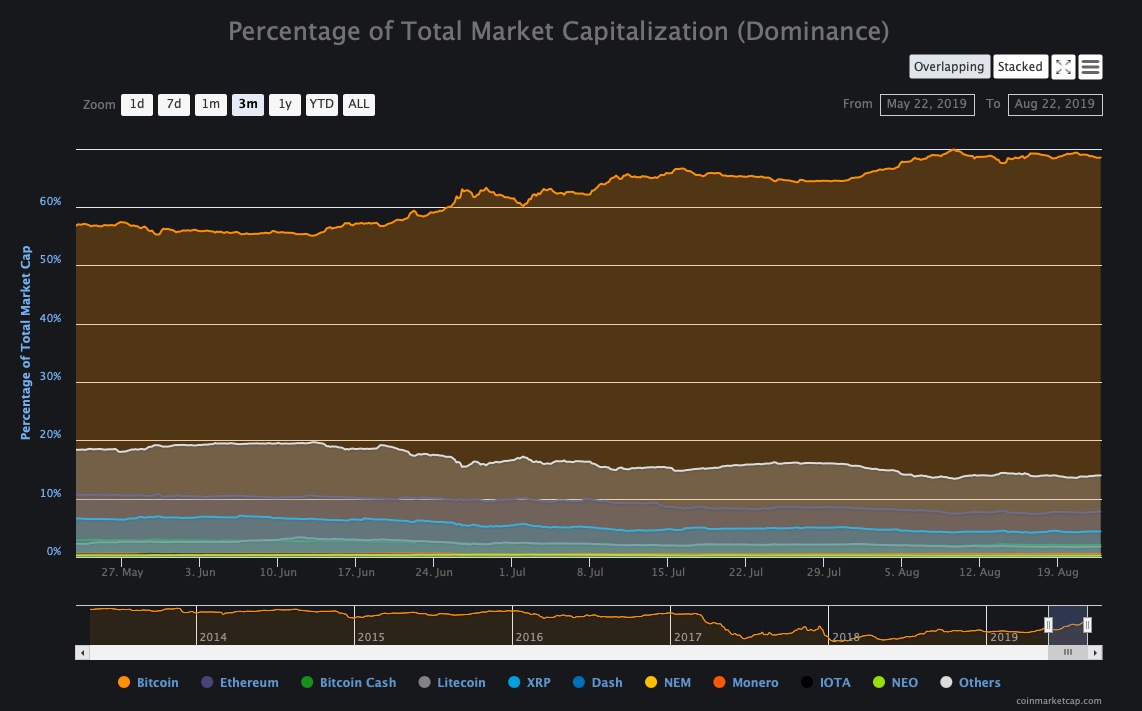 Clearly, traders are placing their long-term bets on Bitcoin instead of Ether. In the past, Bitcoin consolidation after strong rallies led to traders transitioning into altcoins. But now, it seems these investors are choosing to take shelter in stablecoins instead whenever Bitcoin price goes south.

Ether is essentially teetering on the precipice of uncertainty with a bearish bias. The current weekly Doji candle on the ETH-USD weekly chart below supports this assessment. 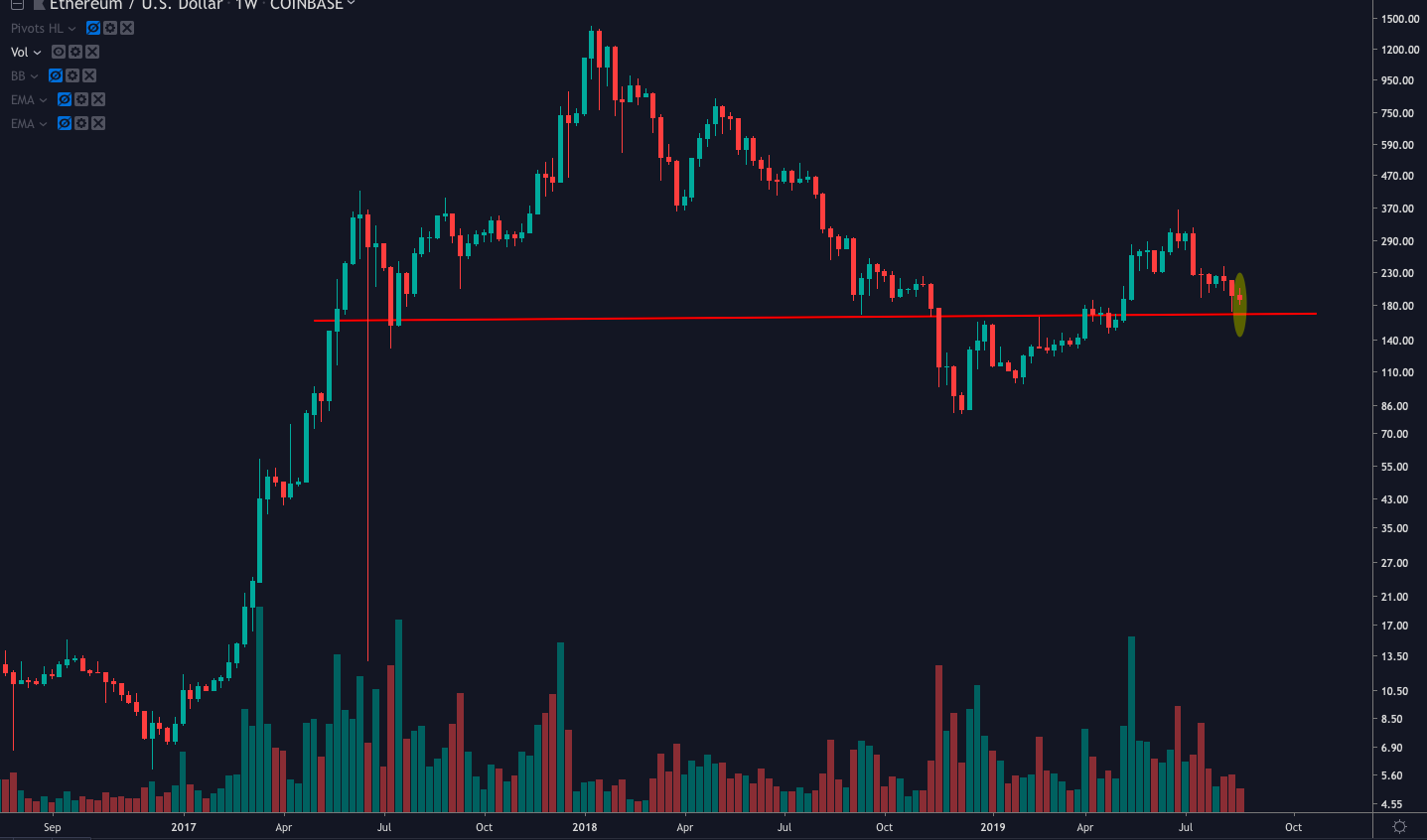 What’s concerning, however, is it seems investors and blockchain zealots are losing faith in the project and its ability to scale — which could pose a larger threat to Ethereum’s long-term value proposition.

For what it’s worth, a quick perusal through crypto twitter allows one to gauge brewing negativity among many investors. Namely, core developers being too focused on hard forks, protocol upgrades and philosophical issues instead of ways to increase the value of the Ether.

Earlier in the year Gnosis founder Martin Köppelmann said that he does “not see ASICs as an existential threat to Ethereum neither is ProgPoW a long term important improvement. In such a case in my view Ethereum HAS TO STAY NEUTRAL and let market forces do its thing.”

“ProgPoW isn’t effective. You can’t fairly distribute mining because human production is incredibly unequal. You’ll always have a minority with a disproportionately higher output. Alienating the MVPs on your team could lead to future losses.”

Furthermore, with IEOs taking the place of ICOs and the transition of most of the largest altcoins by market cap to their own mainnets, the Ethereum network is left searching for a use case that will draw lucrative partnerships and retail investors.

Will a rising tide lift all ships?

Currently, dark clouds are gathering on Ether from multiple vantage points and the saving grace might be an explosive rally from Bitcoin as Ether typically follows BTC price action.

The ETH-BTC pair is also less than inspiring on the weekly time frame. 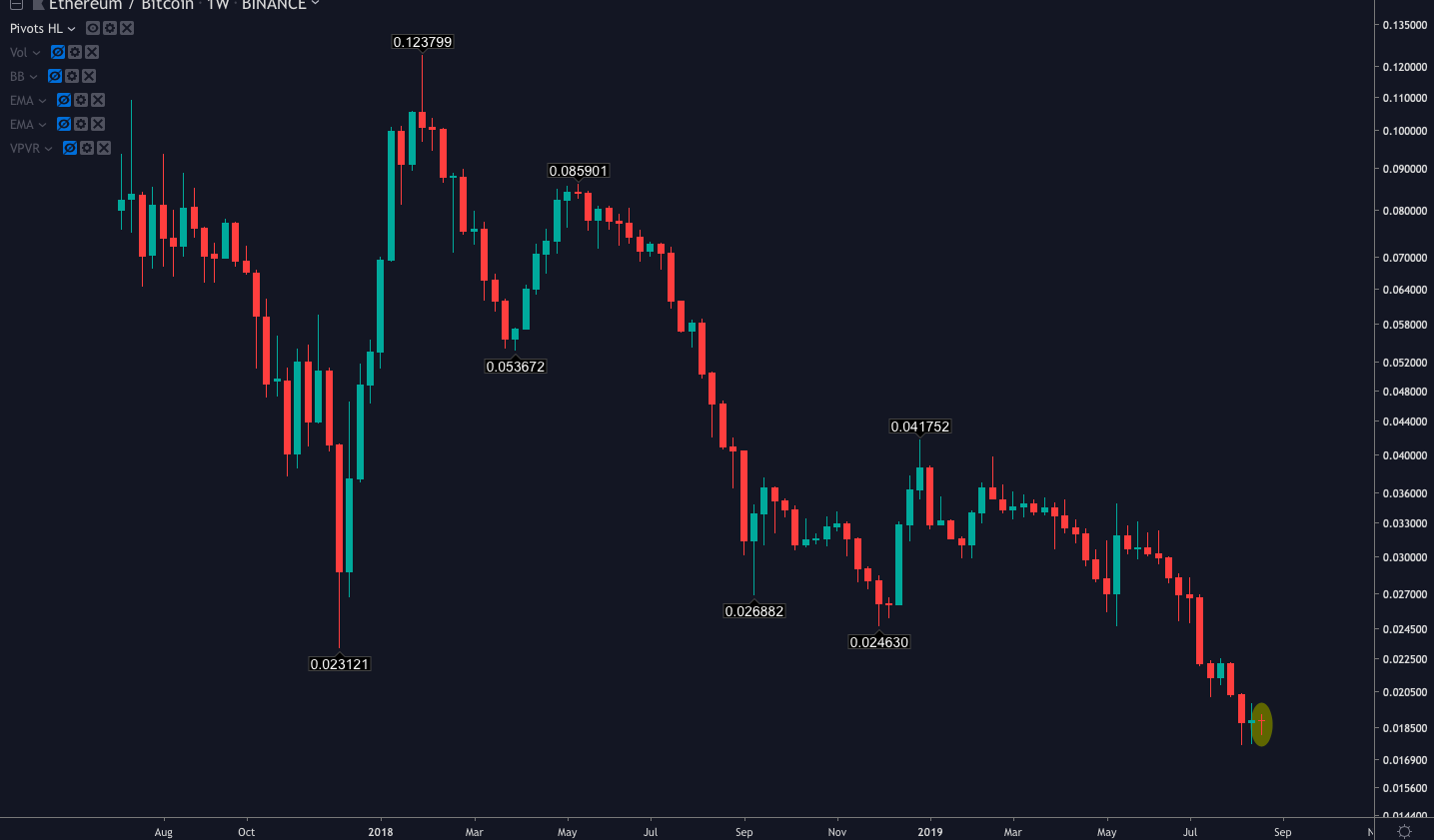 After forming a double bottom at 0.017594, the pairing is flashing a Doji candle, similar to the ETH/USD pair. Popular crypto-twitter analyst Dave the Wave, who is well known for his logarithmic regression analysis, believes that its not curtains for Etherum.

He opines that investors taking “a major position in BTC and a minor one in ETH covers all bases.”

Ether and Bitcoin price charts in 2017-2019 clearly show Ether is entering a mini bearish spat that will be followed by a period of consolidation in the run up to the next bullish cycle.

Of course, all of this could be dependent upon Bitcoin breaking above $12,500 again. But it’s also possible that Bitcoin’s market dominance will continue to grow as the 2020 halving event approaches.

Simply put, Bitcoin’s growing dominance is sucking all the air from the room and altcoins, including Ether, are asphyxiating.

Obviously, Ether has its users and potential use cases. The Ethereum network has huge capacity and there are a number of prominent projects and institutions using the protocol or investing in Ether on behalf of clients.

As previously reported by Cointelegraph, the World Bank recently raised an additional $33.8 million from the second round of its blockchain bond offering, which is featured on a private version of Ethereum blockchain dubbed “bond-i.”

This follows the first successful trial by the World Bank of an $81 million blockchain-based bond on the same platform last year.

The Nasdaq has also expressed serious interest in Ether (and other cryptocurrencies) and the exchange recently took part in a $27.5 million funding venture for ErisX, a crypto exchange offering spot and futures trading for a variety of digital currencies.

Only time will tell if Burniske is correct about Ether being in a bear market. Long-term investors are hopeful as they patiently waited 15-months for a trend reversal and Ether’s current 2019 all-time high of $364 was exciting but not exciting enough. While it is honorable that Ethereum core developers are dedicated to ensuring that the network is the best it can be there is an old African proverb that perfectly sums up the situation:

“When elephants fight, the grass gets trampled.”