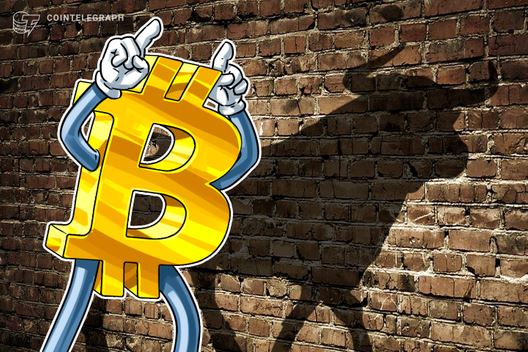 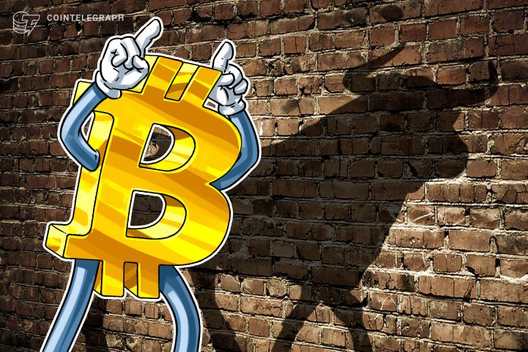 Bitcoin (BTC) remains bullish and a multitude of metrics support this claim.

Is this a trend reversal?

Over the past week investors’ short-term sentiments about Bitcoin’s prospects appear to have improved. While last week’s market update made the case for why top investors and analysts are overwhelmingly bullish on Bitcoin’s predicted long-term price action, the fall from $13,800 to $9,100 did shake retail investors confidence for the short term.

Prior resistance levels that were obliterated throughout Bitcoin’s ascension from $4,000 to $13,800 proved to be weak support and many investors expected Bitcoin to drop to $8,500–$7,500 before reversing course. 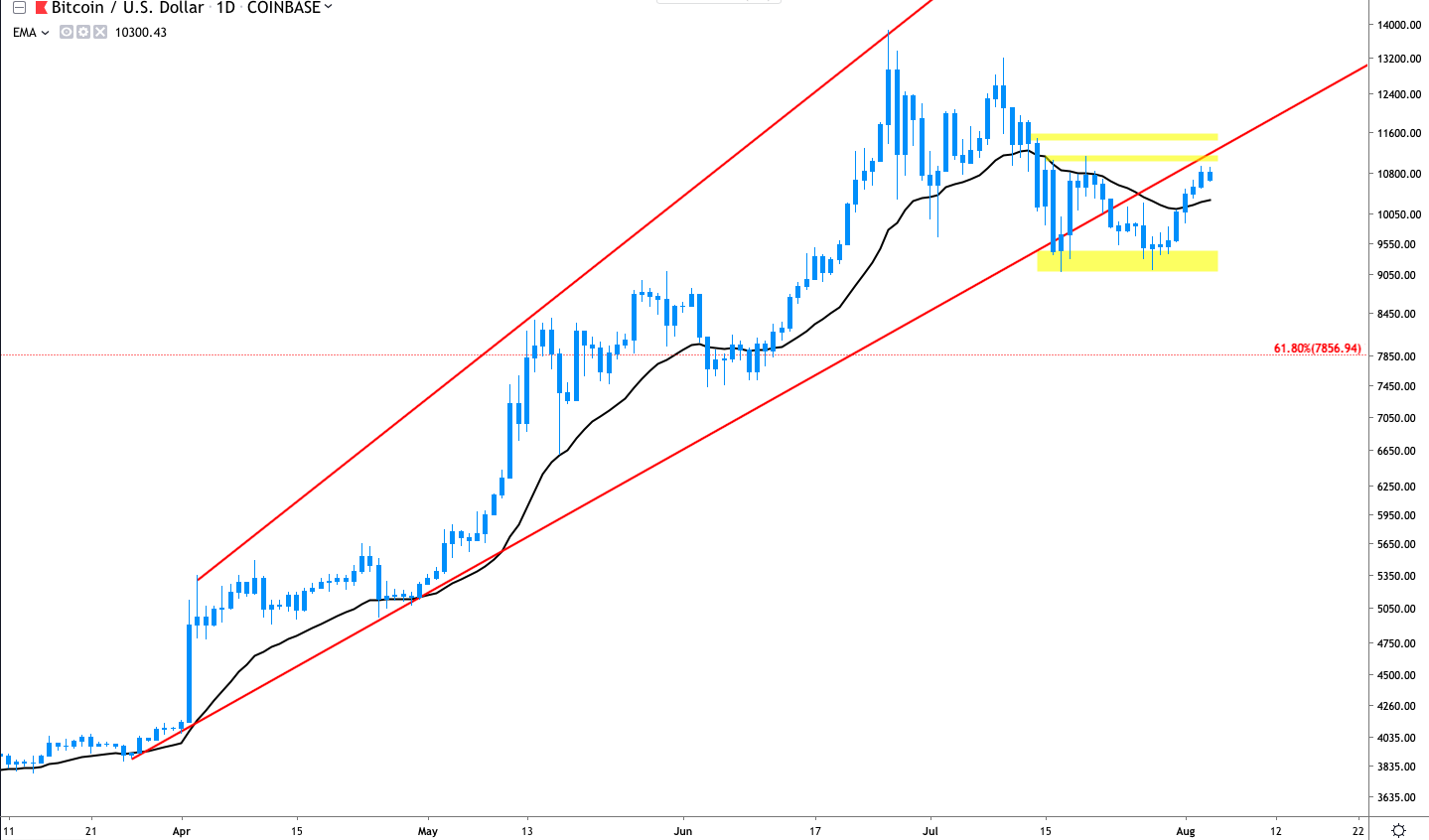 Investors will have noticed that Bitcoin formed a double bottom around $9,100 and some believe that the expectation that Bitcoin will drop to $7,500–$8,500 will be a non-event as larger hands will front run a trend reversal from $9,000.

Even more important from a psychological and technical point of view, a sustained move above the $11,200 resistance places Bitcion back into the rising wedge formation that carried Bitcoin from $4,000 to its 2019 all-time high.

The majority of crypto-media analysts have focused on the 21-EMA being a good indicator for gauging the strength of bullish and bearish momentum. Keeping this in mind, it’s worth noting that the most recent surge brought Bitcoin above this point.

One should also note that the majority of this week’s action occurred on low volume and more intuitive traders like Alessio Rastani advised caution as Bitcoin could ascend to $11,200–$11,500, quickly retract, and prove to be a bear trap. 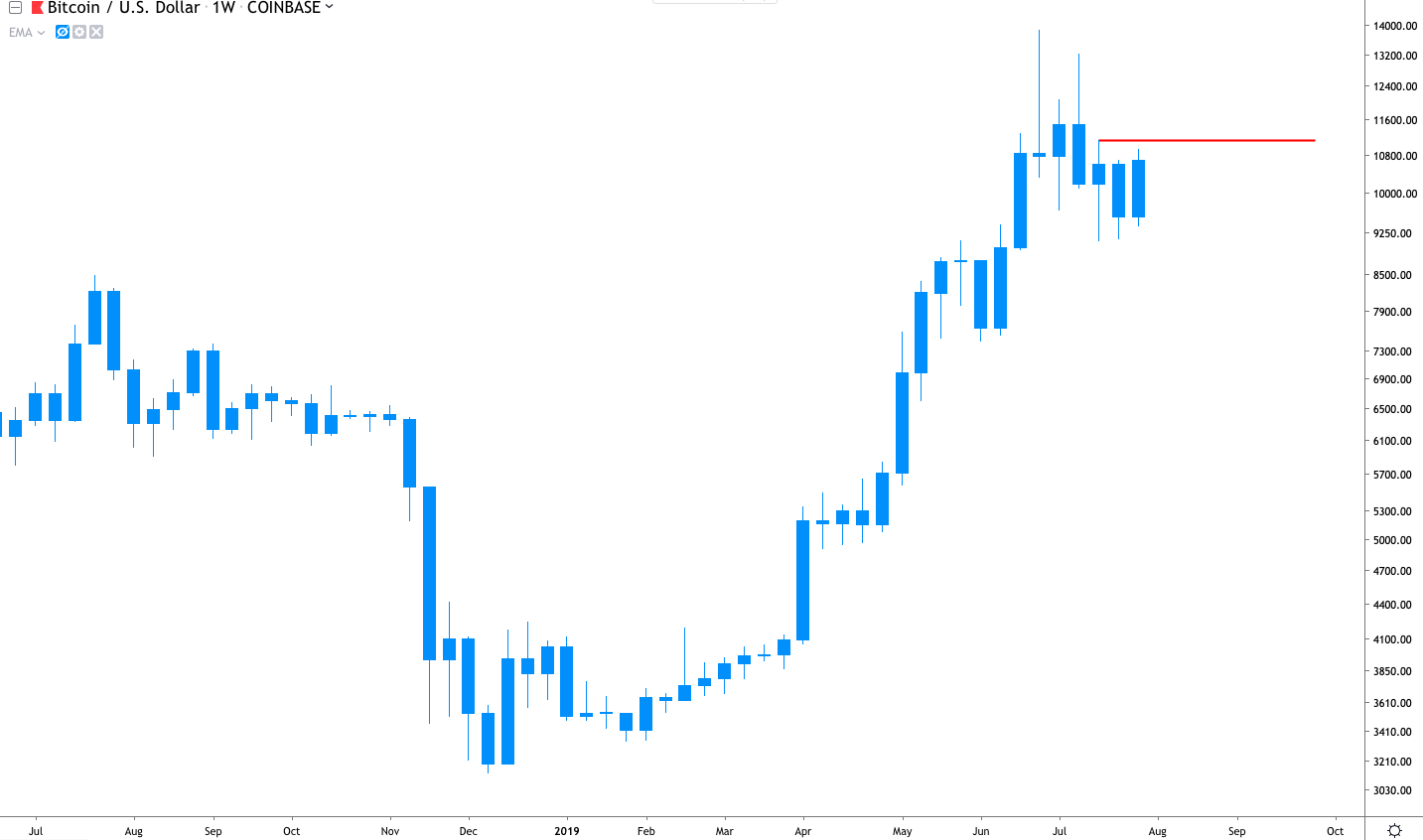 Currently, Bitcoin is tightening as the weekly chart shows the digital asset setting higher lows. A more convincing move would be the achievement of a weekly close at or above $11,150. A sharp increase in bull volume would also provide some confirmation of a trend change.

As Bitcoin reversed from the $9,100 double bottom, the daily RSI also leapt out of the descending wedge and back above 50 which has served as a reliable oversold bounce point since the rally from $4,000 began. 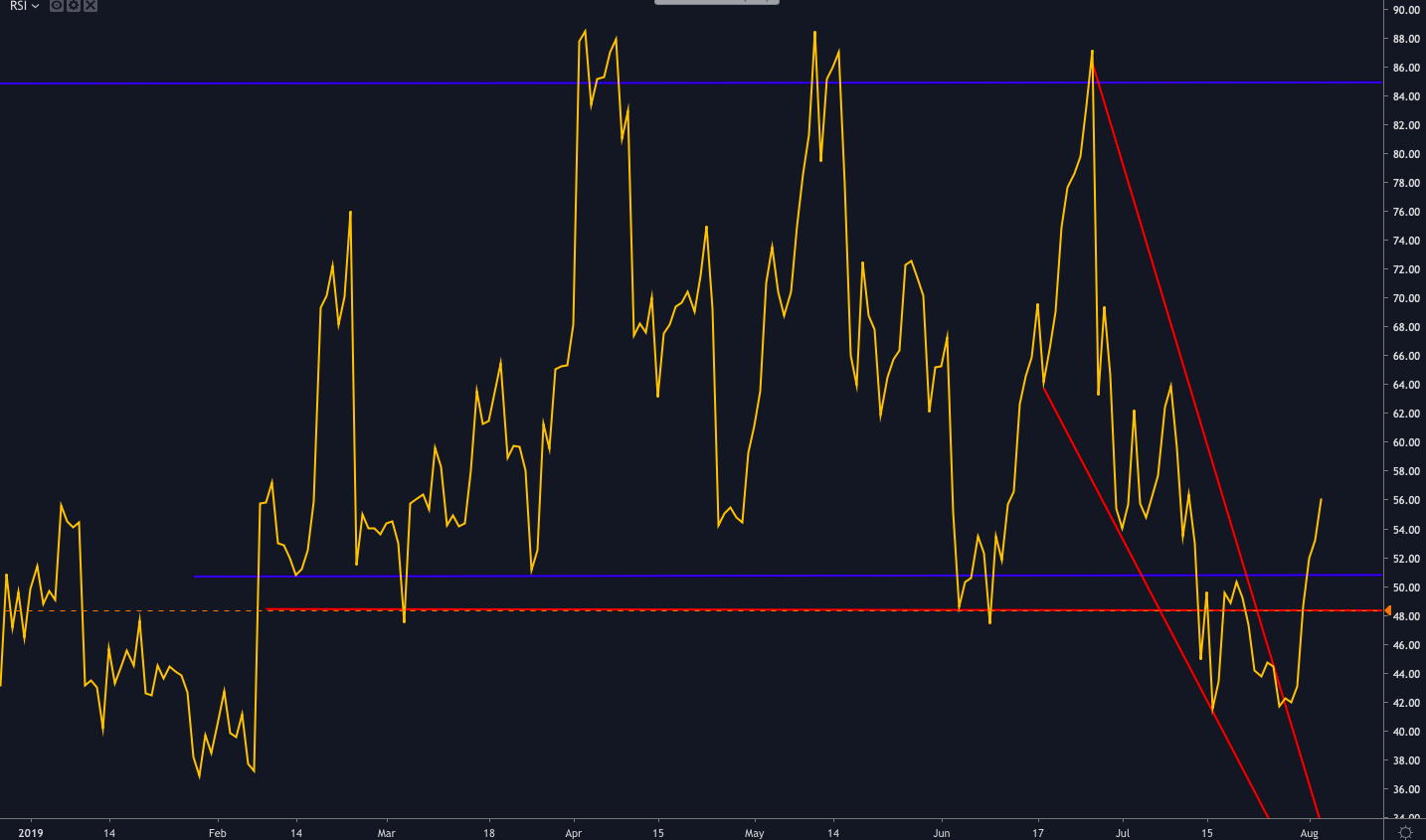 The daily MACD also crossed over the signal line and the histogram is positive again, which is a bullish signal. 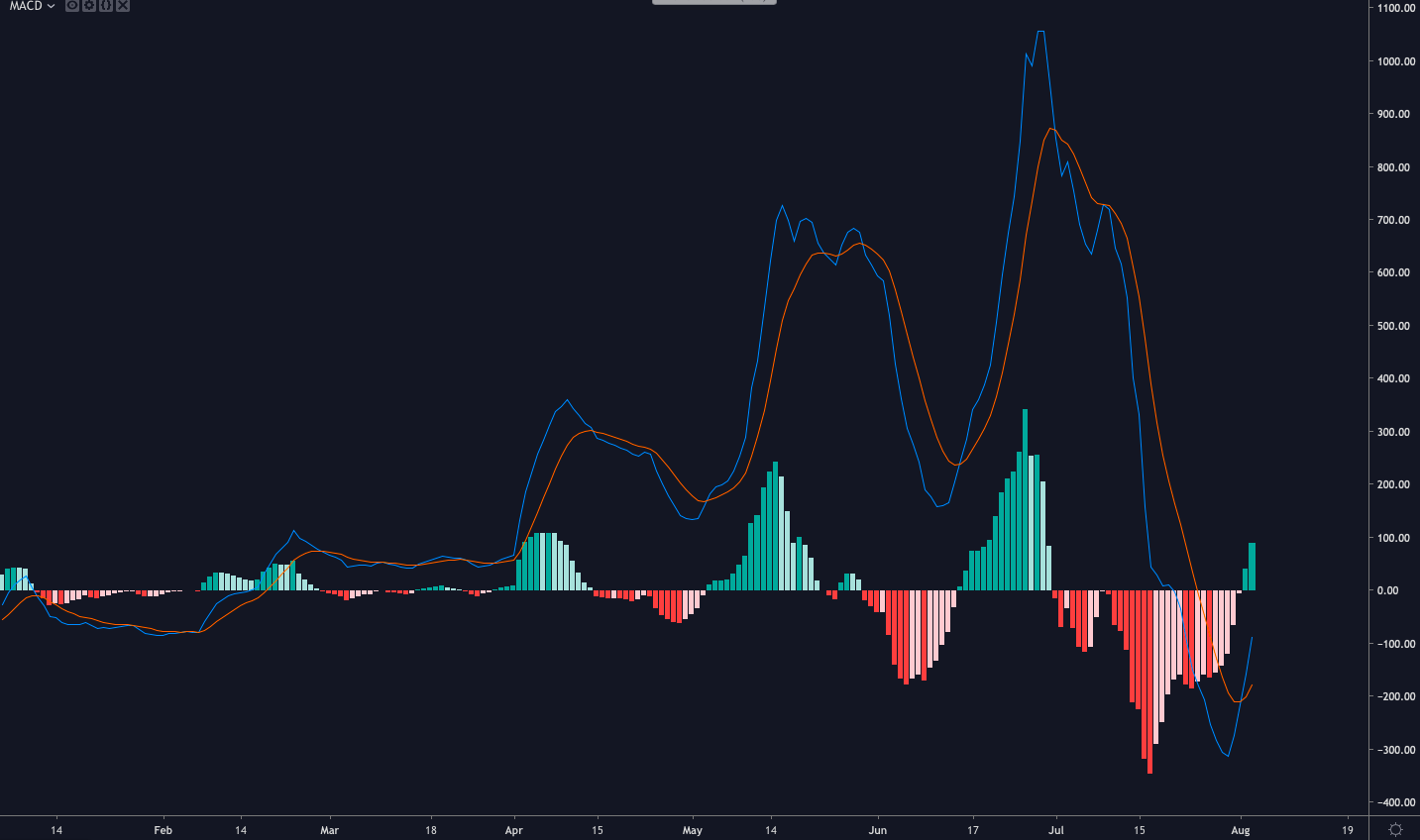 Over the past few weeks traders have also pointed to the astonishing number of USDT minted since June and the lagging impact of this on Bitcoin’s price action. 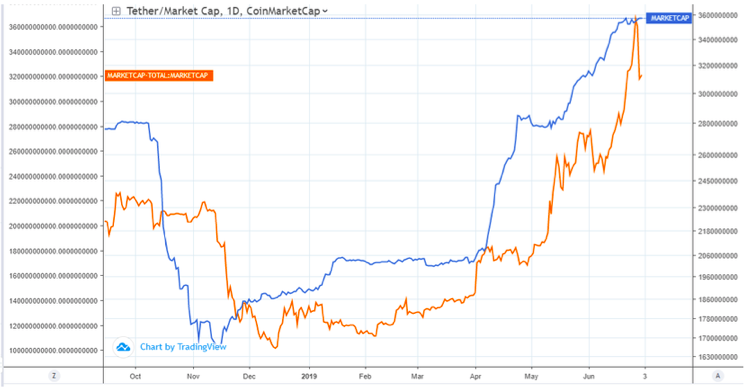 Over the past few months Bitcoin’s dominance rate has also been on a steady rise. Facebook’s Libra reveal quickly drew the ire of United States lawmakers and U.S. Treasury Secretary Steven Mnuchin went out of his way to say that strong regulations will be placed on Bitcoin.

These statements may have impacted investor confidence, but other events impacting altcoins have helped Bitcoin maintain a dominance rate above 66, which above Bitcoin’s November 2017 dominance rate. Travis Kling of Ikigai Asset Management attributes the rise in Bitcon dominance to:

“BTC is separating itself from the rest of the crypto asset landscape in terms of institutional investability.”

A recent report from Coin Metrics also pointed out the absolute culling that altcoins have taken and the analytics firm concluded that a continued onslaught of regulatory, macro-economic and geopolitical pressures are negatively impacting altcoins. 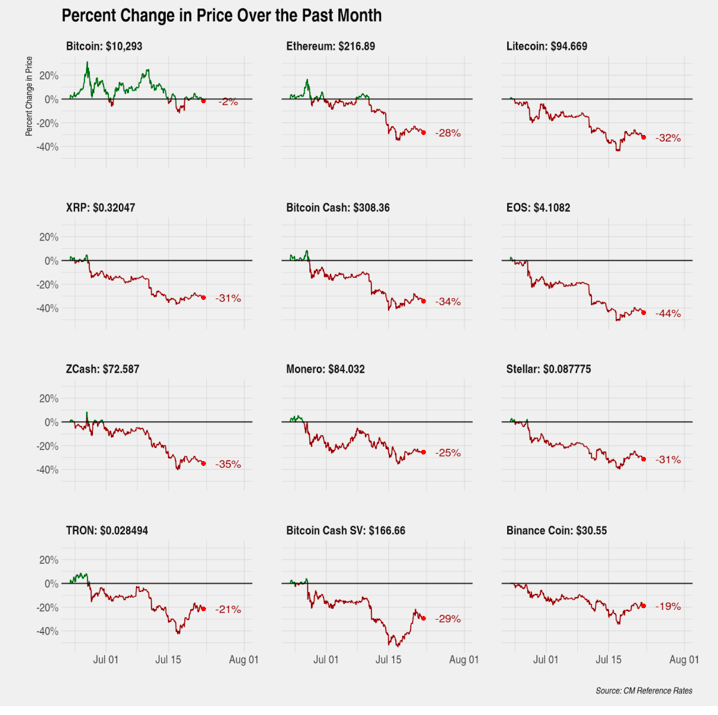 Coin Metrics cites recent actions from Binance, Poloniex and Bittrex. Each exchange implemented new policies restricting U.S.-based traders from derivative instruments and a range of digital assets. The Commodities Futures Trading Commission also has opened an inquiry of BitMex over allegations that the exchange permitted U.S. residents to trade on the platform.

As crypto analyst Alex Kruger points out, altcoin to BTC pairings and altcoin to U.S. dollar pairings tend to perform poorly when FUD is in full effect. It’s clear that investors jump into Bitcoin and the top stablecoins during these times, hence Bitcoins growing dominance rate. 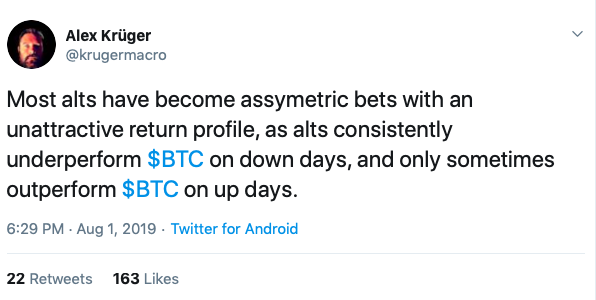 Taking a look at the monthly chart, regardless of whether one factors in the blow-off tops or ignores them, 2019’s all-time high is not too far away from Bitcoin’s 2017 high. 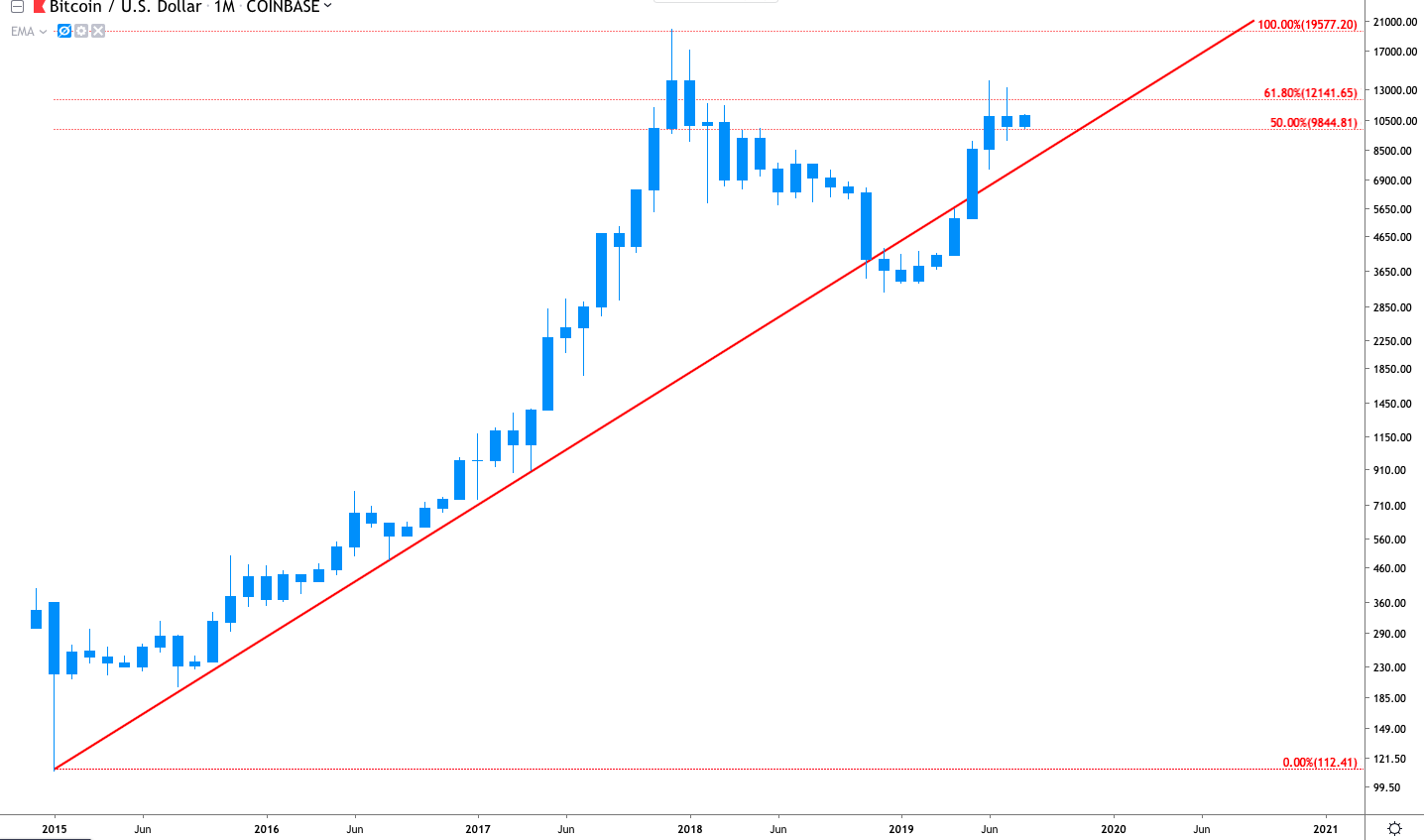 While not discussed as much by those obsessed with price action, Bitcoin’s hash rate continued to explode to new highs month after month. This is significant as it shows the growing strength of the Bitcoin network. A higher hash increases network security and increases the difficulty of launching a 51% attack.

Bitcoin transactions are also on the rise and in May the transaction count surpassed 450,000 per day. During 2017’s mega rally transactions reached 490,000.

Earlier this week Adamant Capital founding partner Tuur Demeester retweeted a post from Nic Carter pointing out that Bitcoin is closing in fast on its billionith dollar charged in transaction fees. 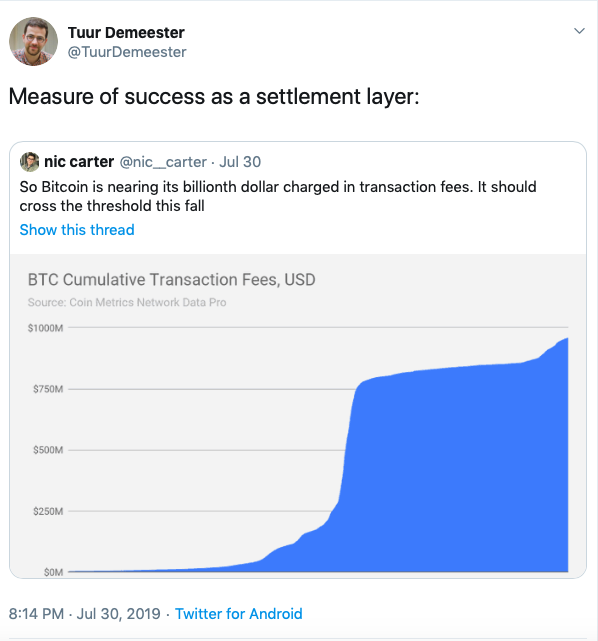 Demeester added that increasing transactions are a “measure of success as a settlement layer.”

As one can see, an assortment of metrics and technical analysis tools make a strong bullish case for Bitcoin. Unexpected sharp 20% to 40% corrections will continue to happen, and they will be scary.

There are other metrics to consider, like, increasing monthly trade volume across exchanges, growth in unique Bitcoin addresses and increases in Bitcoin’s volatility.

Swing traders are going to swing and day traders will continue to pour over the 1, 3 and 5 minute charts.

As a note of encouragement for those of us who are wage slaves until the next moon event, dollar cost averaging into Bitcoin is a tried a true method to take advantage of Bitcoin’s volatility without having to monitor charts all day.

It was not too long ago that Fundstrat Head of Research Tom Lee tweeted that Bitcoin historically generates the bulk of its annual gains in just 10 days. 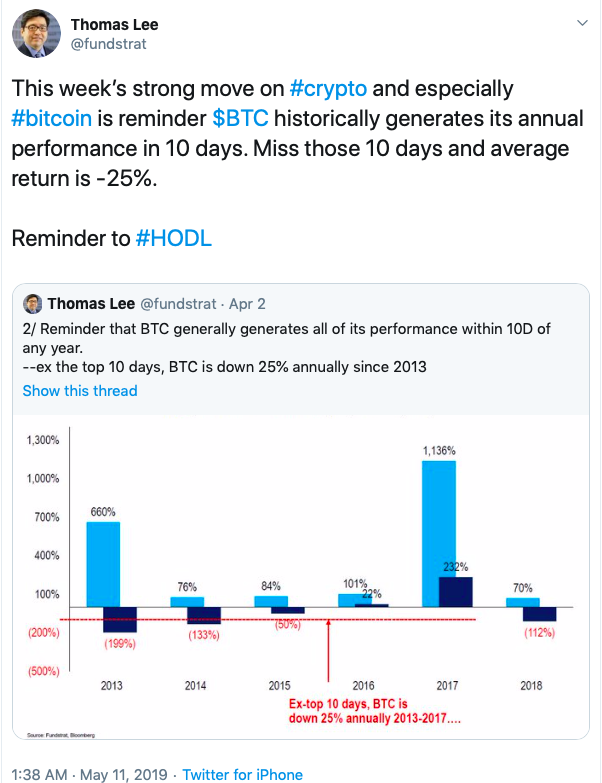