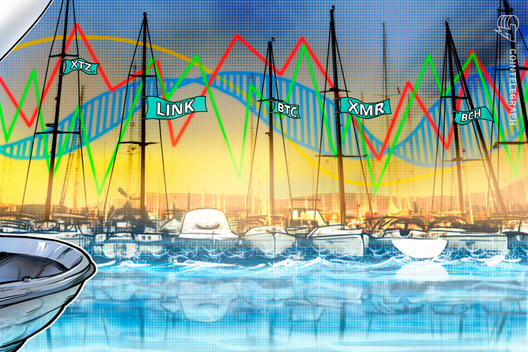 A few of the top five performers of the past week are showing strength. What is a good level to buy? Let’s look at the charts.

Binance research highlights that Bitcoin (BTC) has rallied along with other assets that are considered safe-havens following the latest tariff tweet by United States Pres. Donald Trump. This shows that Bitcoin is gaining acceptance as a safe haven and a hedge against geopolitical issues and monetary easing by central banks.

In a letter to investors, Bitwise said that all the attention garnered by Facebook’s Libra project has fast-forwarded the public discourse on cryptocurrencies by two or three years. While not all the attention is positive, the firm believes that the involvement of regulators will give confidence to investors, which will be positive in the long term.

After Libra, now Walmart wants to develop its own U.S. dollar-backed digital currency. While these projects are likely to face stiff opposition from regulators, we believe that they will bring cryptocurrencies into a greater limelight, which is positive.

Tezos (XTZ) is the best performer of the past seven days with a massive jump of over 40%. It shot up after Coinbase announced that it will onboard the cryptocurrency on its professional trading platform, Coinbase Pro. The four-stage process will start with inbound XTZ transfers on August 5. Huobi Wallet tweeted that it will be a Tezos baker and support XTZ in the near future. Blockchain development company Truffle announced that it will add support for the Tezos blockchain protocol in its developer suit. These favorable fundamental news helped the digital currency rake up strong gains. However, can this continue or will the rally peter out after the news-based rally? Let’s analyze the charts.

The XTZ/USD pair has formed a cup and handle reversal pattern, which will complete on a breakout and close (UTC time frame) above $1.85. Following the breakout, the target objective is $3.37 and above it $4.20. The moving averages have completed a bullish crossover and the RSI has jumped into positive territory, which suggests that bulls are back in the game.

However, the failure of bulls to close the week near the highest point shows profit booking at higher levels. If the price fails to break out of $1.85, the reversal pattern will not come into play and a few weeks of consolidation between $0.83 and $1.85 are possible.

Unlike other major cryptocurrencies, Chainlink (LINK) has been volatile and has been finding a place either among the top losers or the top gainers for the past few weeks. This week, it has again found a place as a top gainer. Oracle announced a partnership with Chainlink, which is a big boost for the project. In other news, Callisto Network announced integration of Chainlink Oracles and Zilliqa tied up with Chainlink to power its smart contracts. While the fundamental news flow has been positive, let’s see what the chart projects.

The LINK/USD pair has found support at the 61.8% Fibonacci retracement levels of $2.0175 for three successive weeks. This makes it an important level to watch on the downside.

On the upside, bulls might face resistance at $2.8498, above which, the pair is likely to pick up momentum and rally towards the lifetime high. Therefore, traders can wait for the price to scale and close (UTC time frame) above $2.8498 before attempting long positions.

If bulls fail to propel the price above $2.8498, the pair might remain range-bound for a few weeks. Our bullish view will be negated if bears sink and sustain the digital currency below $2.0175.

Bitcoin (BTC) has gained in double digits in the past seven days. The past week saw a flare-up of trade war between China and the U.S. and a rate cut by the U.S. Federal Reserve. Peter Tchir, former Executive Director at Deutsche Bank, said that Bitcoin acts as a lead indicator to hidden geopolitical tensions.

Can Bitcoin extend its rally in the next few weeks? Let’s find out.

In strong uptrends, the pullbacks are usually arrested at the 38.2% Fibonacci retracement level of the entire rally. The BTC/USD pair found support between the 38.2% and 50% retracement levels, which is a positive sign. Both moving averages are sloping up and the RSI is in positive territory. This suggests that bulls are firmly in command.

The up-move might face some resistance at the downtrend line, above which, the pair can retest the recent highs of $13,973.50. This level might see some profit-booking, but once crossed, we expect buyers to pile in and push the price toward $17,208.84.

Our bullish view will be invalidated if the price turns down from the downtrend line and plummets below $9,080. That will indicate selling at higher levels and might catch the bulls off guard.

Bitcoin Cash (BCH) celebrated its second birthday on Aug. 1 and ended up as the fourth-best performer of the week. Can the rally continue?

The BCH/USD pair is rising inside an ascending channel. It remains in an uptrend as long as it stays inside the channel. The bulls will now try to push the price towards the resistance line of the channel. A breakout of the channel will result in a sharp upward move. The traders can initiate positions as suggested in our earlier analysis.

Contrary to our assumption, if the pair turns down and plummets below the channel, it can plummet to $227.70 and below it to $166.25. Both moving averages have flattened out and the RSI is close to the midpoint, which points to a probable consolidation for a few weeks.

Monero (XMR) rounded up the list with gains of just over 8%. Can the cryptocurrency extend its gains in the coming weeks? Let’s have a look at its chart.

The bears broke below the support at $81.4151 in the past week, but could not capitalize on the breakdown. The XMR/USD pair has quickly bounced back above the level, which shows demand at lower levels. Both moving averages have flattened out and the RSI is just above 50, which points to a range-bound action for a few weeks.

Contrary to our expectation, if the cryptocurrency reverses direction and plunges below $71, it will be a negative sign. Such a move can drag it lower to $60.