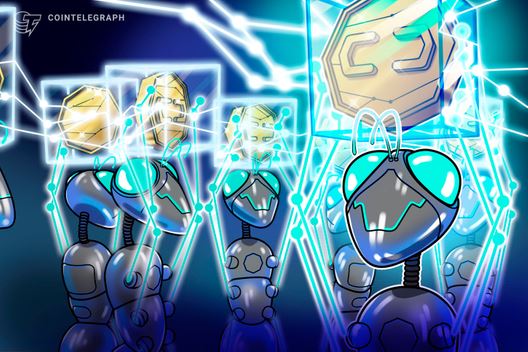 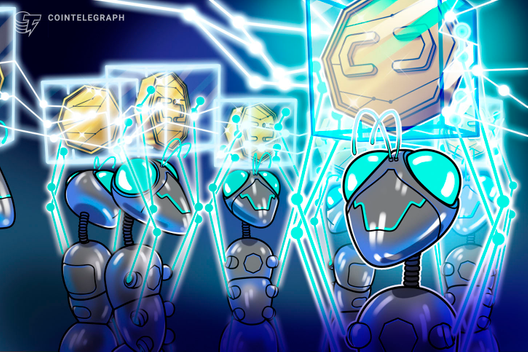 What exactly is the difference between a blockchain and distributed ledgers? Here is a full guide on what each technology does and how…

“Blockchain” and “distributed ledger technology.” Many of us have been guilty of confusing these two terms and using them interchangeably. But even though their meanings overlap in a number of areas, and even though they’ve both reached similar levels of public notoriety since the 2017 cryptocurrency bull market, they aren’t quite identical.

Yes, they both generally refer to a record of information that’s distributed across a network, and yes, they both foster a greater degree of transparency and openness than had been enabled by earlier, centralized databases or digital records. But this is where the analogies end, since blockchains and distributed ledger technology (DLT) each come with their own important distinguishing features.

There are two big distinctions, and depending on where you sit on the Bitcoin vs. blockchain spectrum, some qualify Bitcoin-style blockchains as largely superior to and more innovative than their distributed ledger counterparts while others qualify DLT as more useful for everyday commercial purposes.

The illustration below outlines how the two technologies relate to each other, showing that one way to implement DLT is through a blockchain: 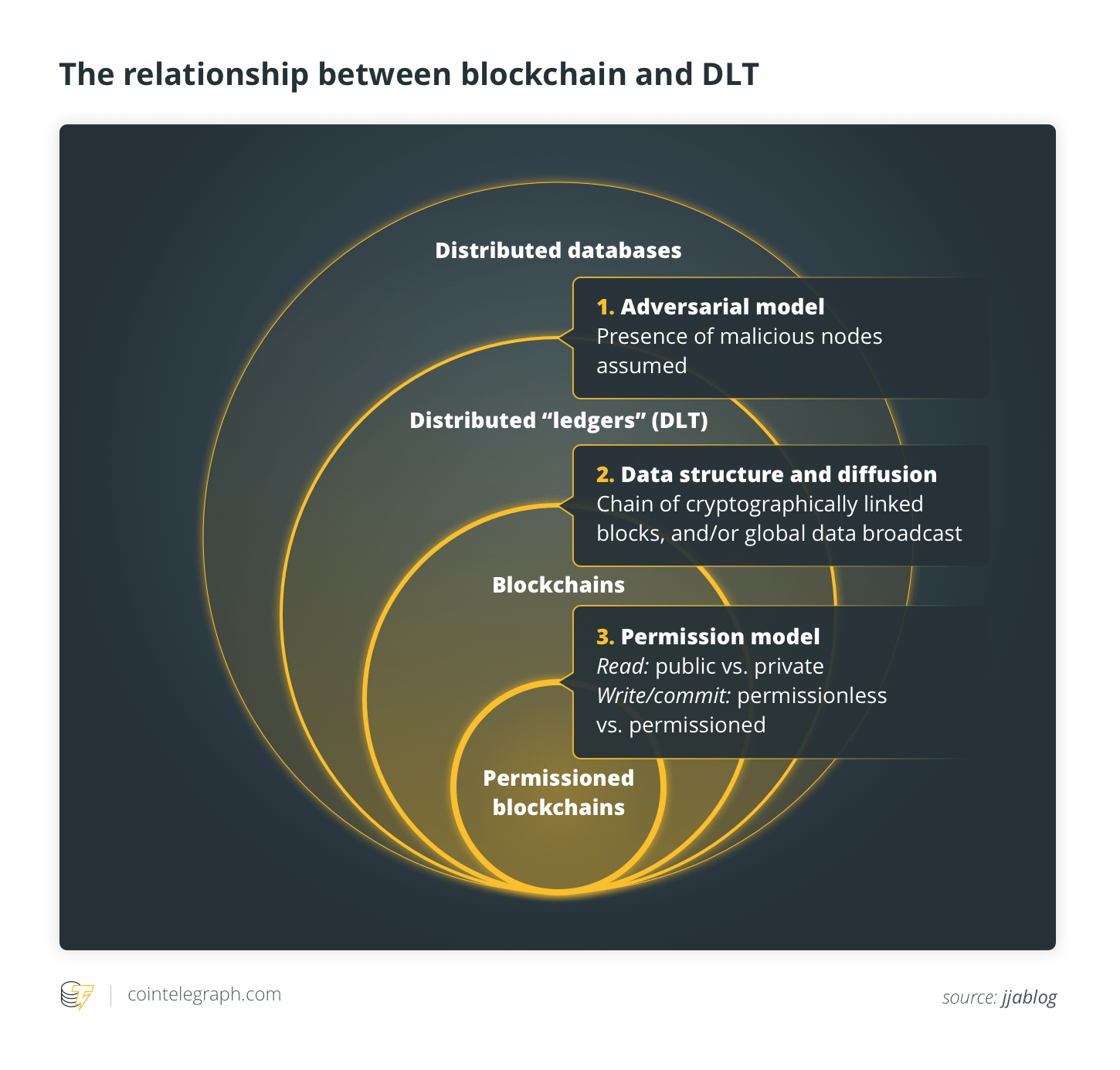 Firstly, blockchains are generally public, meaning that anyone can view their transaction histories and that anyone can participate in their operations by becoming a node. They are, as cryptocurrency parlance puts it, “permissionless.” This is the key feature pointed out to Cointelegraph by Marta Piekarska, the director of ecosystem at Hyperledger. According to Piekarska:

“First and foremost: one is permission less, the other is permissioned. This means that in the first case anyone can participate in the network, in the other: only chosen participants have access to it. This also determined the size of the network: Bitcoin wants to grow infinitely, while in a permissioned blockchain space, the number of parties is smaller.”

Put simply, the public aspect of blockchains generally implies three interrelated things: 1) Anyone can use the blockchain, 2) anyone can serve as a validating node of the blockchain, and 3) anyone who becomes a node can, in turn, act as part of that blockchain’s governance mechanism. In theory, this makes blockchains decentralized and democratic structures resistant to undue control or influence from any single party.

By contrast, a distributed ledger generally doesn’t enable any or most of these public features. It restricts who can use and access it (hence the “permissioned” terminology), and it also restricts who can operate as a node. And in many cases, governance decisions are left to a single centralized company or body. Compared to the ideal of a public, decentralized blockchain, it exists solely to serve the interests of a concentrated group of commercial players and interests.

Below is an image detailing how centralized, decentralized and distributed networks are structured: 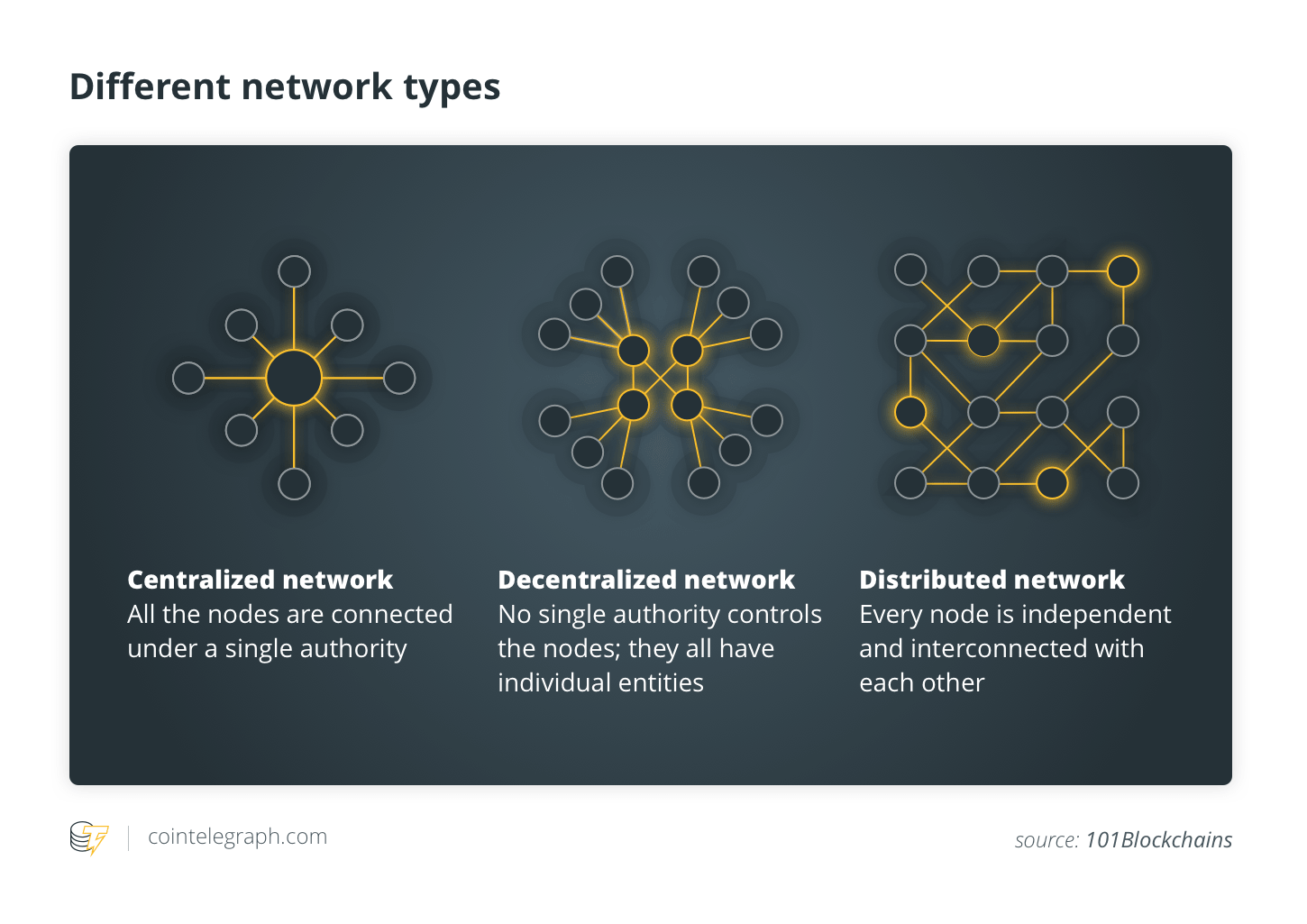 And then there’s the second main difference. As the name implies, blockchains consist in a series of time-stamped “blocks” that record the then-current state of the overall blockchain/cryptocurrency and that need to be cryptographically validated by a majority of the network in order to form the next entry in the chain. As Bitcoin Core developer Kalle Alm explained to Cointelegraph, this ensures a greater level of security for the blockchain, insofar as the need for cryptographic consensus makes it very difficult to fake transactions. Alm went on to say:

“Blockchains alleviate the trust requirement in a shared timestamped database. For a public cryptocurrency, this is obviously necessary or someone might just go and give themselves a million USD, but for a private database, especially when it is not a cryptocurrency but some more abstract form of smart contract platform, it starts to make less and less sense.”

However, while some distributed ledgers aren’t cryptographically validated chains of blocks, it’s worth stressing that some are — or that they still feature cryptographic consensus. For instance, while R3’s Corda ledger doesn’t actually comprise a chain of blocks, it nonetheless relies on its notaries (i.e., nodes) reaching consensus over time-stamped transactions. Because of this, it should be emphasized that there’s really only one essential difference between blockchains and distributed ledgers, which is simply that one is permissionless and the other is permissioned. Michal Zajda, the blockchain architect at Aeternity blockchain, told Cointelegraph:

“The only difference between private and public blockchains is the range of availability. I can easily imagine deploying the Bitcoin protocol in a private cloud serving just a small group of users. The fundamental difference here is between permissionless blockchains — like Bitcoin, and permissioned ones. For permissionless ones, we do not need to trust any third party company to run it fairly and honestly.”

But assuming that a distributed ledger is private and isn’t a time-stamped chain of blocks that results from cryptographic consensus, it often just amounts to a fairly conventional database that just happens to be shared among a select group of participants. This is the point made by Phil Chen, the decentralized chief officer at HTC Exodus. He told Cointelegraph that the difference between public and private blockchains is vast:

“In the enterprise space, people are talking about private blockchains, which technically are not blockchains but a better database management system. Nevertheless, it does have productivity gains; I call it a 9 to 10 innovation, whereas public blockchains like Bitcoin and Ethereum are 0 to 1 innovations that completely change the way we think and use money and computation. Bitcoin is a true public blockchain that is open, neutral, censorship resistant and borderless. And distributed ledgers are simply permissioned databases.”

But as Chen’s explanation indicates, even though blockchains are arguably superior to distributed ledgers, DLT can still be a useful addition to the global economy’s technological arsenal, particularly in cases in which it would be unwise to harness a truly public and decentralized blockchain. Alm added that:

“The strongest argument for a private blockchain seems to be when a bunch of banks get together to create a system for transferring money between each other. In this case, no bank would be content letting any of the other banks ‘maintain’ the database on their own, so a shared blockchain controlled by no one would make sense.”

Added to this, the privacy of private ledgers is an obvious benefit for any company protective of its business or customer data. Still, the chief commercial officer at the Energy Web Foundation, Jesse Morris, contends that, even here, the privacy of public blockchains can actually be much stronger than some people realize. He told Cointelegraph that:

“A common criticism of public chains has to do with privacy (e.g., the details of every transaction are known to all). This criticism does not recognize two simple facts: 1) any dApp can shield certain transactional details by only transmitting the bare minimum of information necessary across any blockchain while keeping sensitive data off-chain and 2) even in private networks, privacy-preserving features are applied to protect sensitive information from participants on a private blockchain, and these same privacy preservation measures (e.g. EY Nightfall, other zero knowledge proofs) are beginning to be utilized on public blockchains as well.”

In other words, there is a recognition that public blockchains potentially offer many of the privacy benefits promised by their more private rivals, and then some. Of course, private ledgers still generally have the advantage of being controlled by the companies that use them — and for big multinational banks that want to have control over their processes, this is obviously a big plus.

There’s also the very salient benefit of improved scalability, since, as mentioned above, distributed ledgers are often shared yet largely centralized databases. As such, they can process hundreds — if not thousands — of transactions per second, while decentralized blockchains such as Bitcoin struggle to top seven transactions per second, all the while consuming vast quantities of electricity. This is perhaps the main benefit offered by distributed ledgers, and even if they don’t offer much decentralization and transparency beyond previous database systems, it’s one reason why they’ll continue being used in the future.