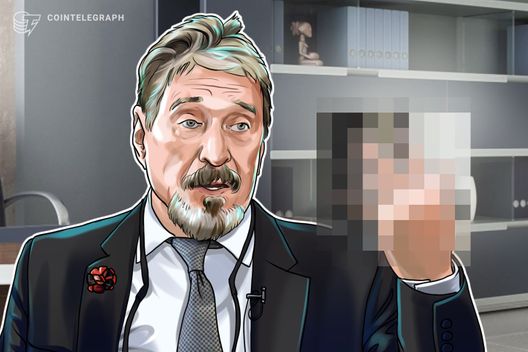 Entrepreneur John McAfee used news of unknown charges against him to reiterate his belief in cryptocurrency taking tax power away from governments.

United States entrepreneur and serial cryptocurrency advocate John McAfee has fled the country to conduct his 2020 presidential campaign, he said in a video statement Jan. 22.  McAfee claims he has been indicted by U.S. tax authorities and plans to run his campaign from a boat in international waters.

The controversial crypto community figure, who plans to run for president of the U.S. next year, said he had learned that a grand jury had been convened against him by the Internal Revenue Service (IRS).

While he said he did not know the exact nature of the allegations against him, McAfee added he had not paid taxes for the past eight years.

“I’ve made no secret of it; I’ve not filed returns,” he said in the first of several video blogs uploaded to Twitter on Tuesday, adding:

“The IRS has convened a grand jury in the state of Tennessee to charge myself, my wife […] and four of my campaign workers with unspecified IRS crimes of a felonious nature.”

McAfee was speaking from a boat in an unknown location, reportedly in international waters, from where he said he would conduct the presidential campaign through the use of proxies on U.S. territory.

The tech mogul has made a name for himself as an outspoken advocate of cryptocurrency in recent years. Perhaps most infamously, he publicly wagered “I will eat my d**k on national television” if the price of Bitcoin (BTC) did not hit $1 million by 2020.

That particular bet has extended beyond social media, with even a dedicated tracking website appearing to keep audiences aware of how likely it is McAfee would need to follow through on his word.

Other activities have been less successful. Last year, McAfee endorsed reportedly “unhackable” Bitcoin wallet Bitfi, similarly betting the online community no one could compromise it.

When someone evidently did, a social media battle ensued before Bitfi ultimately withdrew its security claims.