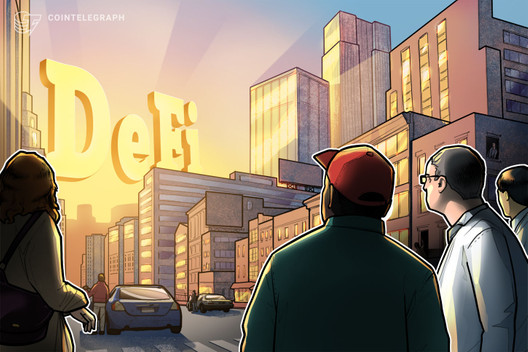 The Ethereum ecosystem is now seeing the growth and adoption of ideas outlined more than five years ago, including many of the components of DeFi.

Ethereum’s fifth anniversary from the mainnet launch is upon us, marking an important milestone in the long history of the first smart contract platform to reach significant adoption.

Following the initial coin offering mania, today’s main narrative behind Ethereum is decentralized finance, an ecosystem that seeks to recreate the financial system from scratch on the blockchain.

Ever since Ethereum’s founding, the application layer has been at the center of its value proposition. In a 2014 interview, Ethereum’s co-founder Vitalik Buterin illustrated that Ethereum is not just about the Ether currency, noting a variety of alternative tokens that could find usage:

“You can use that currency that uses financial derivatives to perfectly track the price of a U.S. dollar. You can use basket currencies […] or now you can also have a contract which acts as a Bitcoin sidechain.”

In a somewhat prophetic statement, Buterin essentially described Dai (DAI), the decentralized token that uses a system of collateralized loans to maintain a U.S. dollar peg. It is possible that Buterin had talked with Rune Christensen, who at the time was already developing what would become MakerDAO.

Centralized stablecoins like Tether (USDT) and USD Coin (USDC) can be considered as basket currencies, while Bitcoin-on-Ethereum projects like WBTC, tBTC and Ren fulfill the role of sidechains.

He went on to explain the main use cases he envisioned for the Ethereum blockchain:

“We’re talking about things like making your own currencies, putting on other currencies, decentralized organizations, voting protocols, name registration, any kind of financial contract, financial marketplaces.”

Many of these use cases can be found in Ethereum today.

Was DeFi destined to emerge?

Ethereum’s early years can be characterized as the preparation and execution of the initial coin offering era.

In a December 2015 interview at Devcon 1, Buterin talked about public goods funding, saying:

“In general, just about everywhere, there’s this chronic problem that public goods are underfunded, and pretty much no one has been able to come up with a consistent solution other than just governments running around and taking 30% of people’s money.”

The DAO was the first attempt at solving this problem on the Ethereum blockchain. It was a “Decentralized Autonomous Organization” where the community would pool funds and decide on which projects to invest in based on a decentralized governance system.

The idea faltered quickly, primarily due to a smart contract bug that resulted in a significant portion of all Ether in circulation being stolen. But while the launch and the subsequent fall played out in the summer of 2016, the DAO’s actual development began some time around August 2015 — almost immediately after Ethereum’s launch on July 30.

Decentralized funding in the form of ICOs went through its own boom and bust cycle afterwards, but many of the existing DeFi projects have their roots in the climax of that era.

MakerDAO was launched in December 2017. Compound Labs was started in August 2017. ETHLend, the precursor to today’s Aave, was born as a September 2017 ICO.

In a conversation with Cointelegraph, Corey Petty, chief security lead at Status, said that he believes that “this push for DeFi was inevitable.”

But the infrastructure required time to set up. “It’s only happened now because we hadn’t had enough liquidity and stable coins to build things on top of it,” he added.

Kain Warwick, founder of Synthetix, told Cointelegraph that he does not believe finance was “the core focus of Ethereum,” but rather “the whole point was that generalized smart contracts could open worlds of possibilities.”

“In hindsight,” he added, “it makes sense that decentralized finance is one of the first categories of contract that has really reached product market fit.”

The world of DeFi is also reviving the concept of the DAO as many projects rely on community governance with equity-like incentives. Warwick said:

“What changed between 2016 and 2020 is time. Anything new takes time. It takes time to make mistakes, fail, learn from your mistakes and others’ mistakes, and use that to move forward.”

Nevertheless, he added that “the DAO renaissance is still in its early stages.”

What about non-financial uses?

One of the defining features of the ICO era was the idea that blockchain technology and smart contracts could be applied to almost any real-life industry. As many of the promises failed to deliver, some became disillusioned with the general concept of blockchain.

Petty believes that “what you saw in 2017 was kind of irrational exuberance of the technology before it was really ready.” According to him, the infrastructure wasn’t yet in place for these projects to thrive, which is the reason why Status decided to contribute in building Eth 2.0, developer tools and a decentralized messaging system for governance.

Warwick believes that it was an issue of incentives, noting that “we have only recently begun to demonstrate how to use native tokens to properly incentivise and bootstrap early network effects.” Though he referred to the ENS system as a current example of “incredible innovations” that are not financial in nature.

The next five years

As we are currently witnessing the growth of key use cases anticipated five years ago, a case could be made that some of the ideas from 2017 will also make their way back.

Petty noted that Status seeks to build out the Ethereum infrastructure so that “those narratives, those use cases, those companies can come back and actually be useful.”

A decentralized and ephemeral messaging system is a core component of that, in his view, as it would allow decentralized organizations to coordinate in a unified and integrated system.

Warwick, on the other hand, focused on DeFi growth:

“I think the next five years of Ethereum innovation will likely focus on finance, we have two decades of faltering fintech “progress” to overwrite and it will happen very quickly.”