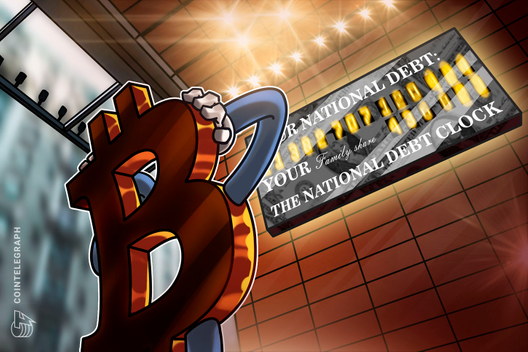 “We’re way past the point where the bubble should have burst. It should have happened long ago. We’re in uncharted territory now.”

This has set off alarm bells. After all, the projected year-end amount of $255 trillion is equal to $32,500 for each person on the planet, or $12.1 million per Bitcoin (BTC), as Cointelegraph reported.

But, as mind-boggling as it may appear, is this total debt really so bad? Debt, after all, can stimulate growth, enabling a country to build roads, bridges, canals and universities, as well as pay pensions and ensure a higher well-being of its nation. It can raise a nation’s standard of living. IIF spokesperson Dylan Riddle told Cointelegraph:

“That level of debt is a point of concern because it represents a massive accumulation of debt in the last decade. Since the last recession, the world has added about $75 trillion worth of debt.”

However, things may not be so dire. As William D. Lastrapes, professor of economics at the University of Georgia, told Cointelegraph:

“It is difficult to say if global debt of $255 trillion is too much. It depends on which countries contribute to this — seems to be mostly US and China — and many, many other factors.”

The challenge with regard to debt is to know how much is too much. Economists have been battling over this point for years, usually in terms of the debt-to-GDP ratio. A highly influential paper earlier this decade placed the tipping point at 90% — that is, a country’s economic growth drops significantly when the size of its debt rises above 90% of its gross domestic product.

The 2010 paper “Growth in a Time of Debt,” by Carmen Reinhart and Kenneth Rogoff, was published around the time Greece’s economy was floundering, and the paper’s conclusion reportedly spurred public and quasi public officials — including those at the International Monetary Fund — to flip from stimulative to austerity in their response to Greece’s debt woes.

The paper also drew scathing attacks, most prominently from economist and Nobel laureate Paul Krugman, who censured the authors’ “coding” error, deplored the “austerity mania” that their paper unleashed among policymakers, and chided them for confusing correlation with causation. On the subject, Lastrapes noted to Cointelegraph:

“Public debt is not intrinsically a bad thing. It allows governments to separate the ‘timing’ of its expenditures from the ‘timing’ of its tax revenues. Without the ability to borrow, governments would be able to spend only as taxes are collected, which is in general not optimal (for example, think of public investment in infrastructure).”

Conversely, a low debt ratio is no guarantee of a healthy economy. As Lastrapes has noted elsewhere, Venezuela’s sovereign debt was only 23% of its GDP in 2017, yet its economy has been in turmoil for several years. Still, some in the crypto community have been skeptical about an imminent economic collapse. Vinny Lingham, CEO of blockchain identity platform Civic, told Cointelegraph:

“We’re way past the point where the bubble should have burst. It should have happened long ago. We’re in uncharted territory now.”

With the Institute of International Finance’s global debt ratio now at 320% — well beyond Rogoff’s 90% “tipping point” — and no apparent signs of Armageddon’s arrival, it appears the debt-ratio model might be flawed, Lingham suggested. Therefore, a new debt model that reflects reality may now be needed. In any case, he believes some intellectual humility is called for. As Lingham said, “Things have become unpredictable.”

It seems hard to believe, though, that living on borrowed money won’t catch up with everyone eventually. As the IIF noted in its Nov. 14 commentary, “With limited room for further monetary easing, debt service costs will be an increasing constraint on fiscal policy.” Lastrapes sees it another way. He told Cointelegraph:

“Government debt becomes problematic when it appears likely (in the eyes of bondholders) that future tax collections will be insufficient for the debt to be paid back. Debt default is the ultimate sign of fiscal irresponsibility and will harm a defaulting nation’s ability to borrow in the future.”

For a country like the United States, which is servicing its debt and has sustained growth as well as strong economic and fiscal institutions, large amounts of debt are not necessarily a problem, Lastrapes added. The fact that today’s interest rates and treasury yields remain low reinforces this view.

But the U.S. situation does not necessarily reflect that of the developing world. Countries like Argentina, Turkey and Iran may not be able to service their debt, and will consequently be blocked from investing in infrastructure, education, health and other needs.

Would Bitcoin soar if the bubble bursts?

The global debt mountain referenced by the IIF drew the attention of the crypto community as well. The assumption of some is that the price of Bitcoin and other cryptocurrencies could soar if and when the debt bubble bursts. As Erik Voorhees said on an earlier occasion with respect to U.S. debt and a potential situation in which corporations will become unable to repay their debts, “fiat is doomed… watch what happens to crypto.”

Related: BTC and Quantitative Easing: What’s the Correlation to Crypto?

This remains a point of debate though. The fact of the matter, said Lingham, is that if the world decided tomorrow to abandon fiat currency and embrace Bitcoin, the cryptocurrency couldn’t handle it. Bitcoin lacks scale — still only able to handle around 7 transactions per second compared to Mastercard’s claim of processing 50,000 TPS. The cost of a single Bitcoin transaction would skyrocket, perhaps into the thousands of dollars.

That said, many crypto evangelists can envision the collapse of the post-Bretton Woods banking system, and its replacement by Bitcoin as the world’s reserve currency. A January white paper laid out the steps by which this might actually occur, though it first requires the price of Bitcoin to reach stratospheric heights:

“If Bitcoin climbs to $10 million per Bitcoin, it could provide the world community with a stable currency, replace sovereign currencies, and act as the reserve currency of the world incapable of inflation or deflation. It would represent the ultimate ‘Store of Value.’”

Why $10 million? At that point, Bitcoin provides a sufficient reserve to alleviate the world’s debt burden. The authors add:

“Bitcoin would be worth between $180 trillion and $210 trillion (depending on when that price was reached). Assuming world debt had reached $500 trillion at that time, remember it has grown by 394% over the past 20 years, Bitcoin would represent a 40% reserve against the debt.”

A realistic possibility? Maybe not, the authors allow. It would require, among other things, the destruction of all altcoins — as they suppress demand for Bitcoin — as well as Bitcoin overtaking gold as a store of value when it is somewhere between the $100,000 and $400,000 price mark.

Also, Bitcoin’s developers have to deliver on their promise of speed, transparency and cost — a big “if.” Lingham, for one, remains skeptical: “The Apples, Googles — the world’s largest companies — are using U.S. dollars still. When they switch over to Bitcoin, then we can have that conversation.”

Crypto utopians often imply that fiat currencies like the U.S. dollar are just a social convention with nothing behind them — since 1944, at least, when the dollar became untethered from gold. But that isn’t quite true, according to Krugman:

“Ultimately, it’s backstopped by the fact that the U.S. government will accept dollars as payment of tax liabilities — liabilities it’s able to enforce because it’s a government. If you like, fiat currencies have underlying value because men with guns say they do. And this means that their value isn’t a bubble that can collapse if people lose faith.”

A lesser role for crypto?

Assuming for the moment that Bitcoin will not supplant the U.S. dollar as the world’s reserve currency anytime soon: Is there a positive, if reduced, role for cryptos and blockchain technology vis-a-vis global debt? IIF’s Riddle told Cointelegraph:

“Crypto doesn’t play a role currently, however technology solutions like blockchain could one day potentially be used to increase debt transparency globally.”

Those solutions could be, for example, the private sector lending to the most vulnerable low-income countries, “or any type of lending.” According to the IIF, “Greater transparency will in turn facilitate good governance, aid the fight against corruption and support debt sustainability.”

Public debt recorded on a blockchain could make it easier for lenders and borrowers both to evaluate emerging risks associated with debt, avoiding problems like the recent Tuna Bonds scandal in Mozambique, where that nation’s government failed to disclose $1.2 billion in loans to the IMF as required under a funding accord.

In sum, while debt ratios are historically high, they still may not be signalling imminent global collapse. Moreover, one shouldn’t count on Bitcoin replacing the U.S. dollar as the world’s reserve currency anytime soon or if ever, according to some. But, in the near and intermediate future, there are still some useful ways crypto and blockchain technology can impact global debt, such as supporting lending transparency in emerging markets.