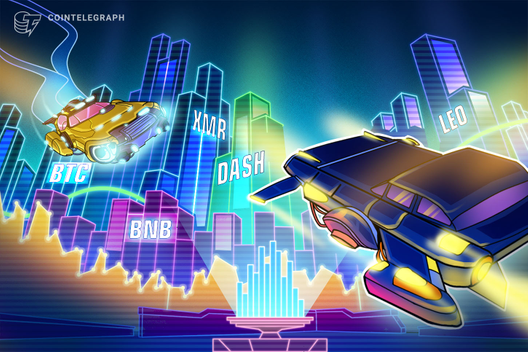 Most top performers of the past week are at critical levels. Will they break out and move up or break down and drop lower? Let’s look at the charts.

About 15 countries, including the G-7 nations, have agreed to create a new system to share personal data of cryptocurrency users to keep a check on money laundering and other illegal activities. The Financial Action Task Force, an international organization comprising more than 30 member countries and economies, is likely to design the system and come up with detailed measures by 2020.

While curbing the illegal use of cryptocurrencies is positive, central banks and regulators keep neglecting the various problems that cryptocurrencies and blockchain technology plan to address. However, even with all the resistance, spending on blockchain solutions is likely to reach almost $16 billion in 2023, according to a report by United States-based market research firm International Data Corporation. This amounts to a five-year compound annual growth rate of 60.2% between 2018–2023, which is a huge positive.

While Bitcoin is a big beneficiary during times of geopolitical tensions and trade wars, several altcoins are likely to benefit from specific use cases. Let’s look at the top five performers of the past seven days and see if we spot any bullish patterns on the chart.

Binance was in the thick of news last week on reports of a Know Your Customer data leak. Though Binance CEO Changpeng Zhao tweeted not to fall for the FUD, the exchange did not give any firm news on whether the leak had happened. They believe that the leaked images did not have a watermark that Binance uses for its KYC documents. According to them, the photos are from a period when the exchange was using a third-party service provider to process its KYC verifications.

However, this news did not cause any damage to the price of Binance Coin (BNB) and it turned out to be the best performer of the week. In other news, Binance US is planning to add about 30 digital assets for its US customers. With mixed news, what does the chart project?

The trend in the BNB/USD pair is up. The correction that started at $39.5941 found buyers at $24.1709. The price did not close (UTC time) below the 20-week EMA, which is a positive sign. Currently, bulls are attempting to resume the uptrend, but are facing resistance at the uptrend line. The trend is weakening as seen by the flattening slope of the 20-week EMA. The RSI, though in positive territory, has been gradually falling towards the center. This shows hesitation among buyers at higher levels.

Bitcoin’s (BTC) dominance reached 69.92% on Aug. 10, which shows that traders are preferring the leading cryptocurrency over altcoins. Former Wall Street trader Max Keiser believes that Bitcoin’s dominance will reach 80% as altcoins fall to the wayside. During the recent escalation of trade war between the U.S. and China, Bitcoin has emerged as a safe haven asset along with gold. Billionaire investor Mark Cuban said that he views both gold and Bitcoin as “being the same thing.”

The cryptocurrency might gain a further foothold in the event of a no-deal Brexit. Serial VC investor Tim Draper has said that the current consolidation might delay the rally in Bitcoin, but he expects his target of $250,000 to be hit by 2023. Will Bitcoin enter a consolidation or break out of the recent highs? Let’s analyze the charts.

The failure of bulls to sustain above the downtrend line is a negative sign. It shows a lack of demand at higher levels. However, the trend remains up and every dip should be viewed as a buying opportunity until the price remains above the 20-week EMA.

If the price rises and sustains above the downtrend line within the next couple of weeks, we anticipate a rally to the recent highs of $13,973.50. A breakout of this resistance will trigger FOMO and a quick move to $17,208.84 will be in the cards.

Contrary to our assumption, if the BTC/USD pair reverses direction from current levels and plummets below the 20-week EMA, it will signal profit booking by bulls and selling by bears. It will also indicate a change in trend. The next level to watch below the 20-week EMA is $7,451.63.

The malware Smominru, which was previously used to mine Monero (XMR) on over half a million infected computers, has now been updated to steal system access information for possible sale on the dark web, according to a report by cybersecurity company Carbon Black. Though it has held up quite well in the past seven days, can the digital currency build on its gains or will it falter? Let’s look at the chart.

Conversely, if the price dips below the 20-week EMA, but stays above $81.4151, it will remain range-bound for a few weeks. Flat moving averages and the RSI just above 50 also points to consolidation.

The trend will turn negative on a breakdown of the critical support of $81.4151. Below this level, a drop to $60 and lower is possible. However, we give this a low probability of occurring.

UNUS SED LEO (LEO) turned out to be the fourth-best performer of the past seven days. Bitfinex and Tether’s legal battle against the New York State Office of the Attorney General (OAG) has been extended as Justice Joel M. Cohen of the New York Supreme Court has given more time to the OAG to investigate the case.

Conversely, if the price fails to scale above $1.40, the range bound action between $1.20 and $1.40 will continue for a few more days. However, if the pair reverses direction from the current level and plunges below $1.20, it can correct to the lows at $1.0384. We suggest that traders wait for the price to break out and sustain above the 50-day SMA before turning positive.

Dash (DASH) rounds up the top five performers of the past seven days. Major crypto platform Coinbase announced that it is considering support for eight new digital assets, including DASH. While this fundamental news is positive, how does its chart stack up? Let’s take a look.

Though the DASH/USD pair has stayed above the immediate support of $95.4264 for the past three weeks, bulls have not been able to achieve a strong bounce off it. This shows a lack of urgency among buyers to load up on the cryptocurrency at current levels. The price has been trading below both moving averages for the past four weeks and the RSI is in the negative zone, which is a bearish sign.

Unless the price quickly rises above the moving averages, we expect bears to attempt a breakdown of $95.4264. The next support on the downside is at $86.3249, which is the 78.6% Fibonacci retracement of the rally from the lows. If this support breaks, a retest of the yearly lows will be in the cards.