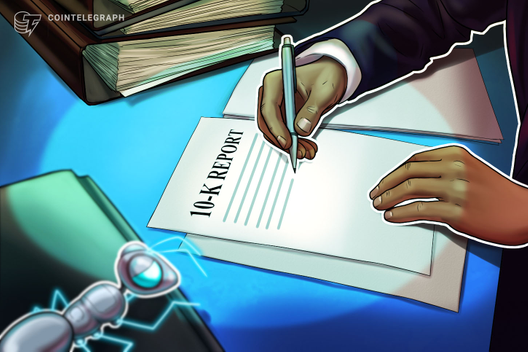 Most of corporate America is silent about blockchain, but there is evidence from companies’ SEC-required 10-K reports that shows some companies’ attitudes.

How seriously are American corporations committed to blockchain technologies? Are blockchain technologies materially significant yet? One place to find the answers to these questions is Form 10-K, a report the United States Securities and Exchange Commission (SEC) requires corporations to file annually. Some of the information a company is required to disclose in the 10-K includes details on the nature of its business, risk factors, financial data, organizational structure, subsidiaries, and management’s discussion and analysis about the financial and operational results. Because it is regulated by the SEC, audited by an independent auditor and scrutinized by market participants — such as analysts and institutional investors — the 10-K is considered a credible report and source of information on the operations and financial performance of a firm. Given its inherent credibility compared to, say, a marketing campaign, social media post or presentation at a technology conference, as well as the focus of these reports on current shareholders and future investors, we examine companies’ propensity to discuss blockchains in their 10-Ks in order to measure the degree of their investment in this technology.

We extracted 10-K reports from the years 2014 to 2018 that mentioned the terms “blockchain” or “distributed ledger” and counted the number of times a corporation used them. We found very modest results. Of the 36,836 10-K reports in the database spanning five years, only 242 reports — representing a little more than half of a percent — mentioned blockchains or distributed ledgers. Thus, most of corporate America is silent on blockchains in the 10-K reports, suggesting that involvement with blockchain is not yet materially significant enough to alert investors.

The following companies cited blockchains as a risk factor that could adversely affect their companies: Accenture, American Express, Eastman Kodak, Goldman Sachs, Northern Trust, Overstock, State Street and Visa. Note that Accenture and Overstock (like several other companies) discussed blockchain with both positive and adverse statements in their 10-Ks.

American Express, Goldman Sachs, Northern Trust and Visa cited blockchain as one of many technologies that could adversely affect their core businesses. Accenture acknowledged blockchain as a potential risk if client demand waned. Eastman Kodak wrote in its 2018 10-K report, “Kodak cannot predict whether, or the extent to which, the trading price of the Company’s common stock will continue to be affected by blockchain or cryptocurrency markets and any volatility in such markets.” State Street warned that fintech technologies, including blockchain, may impose “additional costs on us, involve dependencies on third parties and may expose us to increased operational and model risk.” 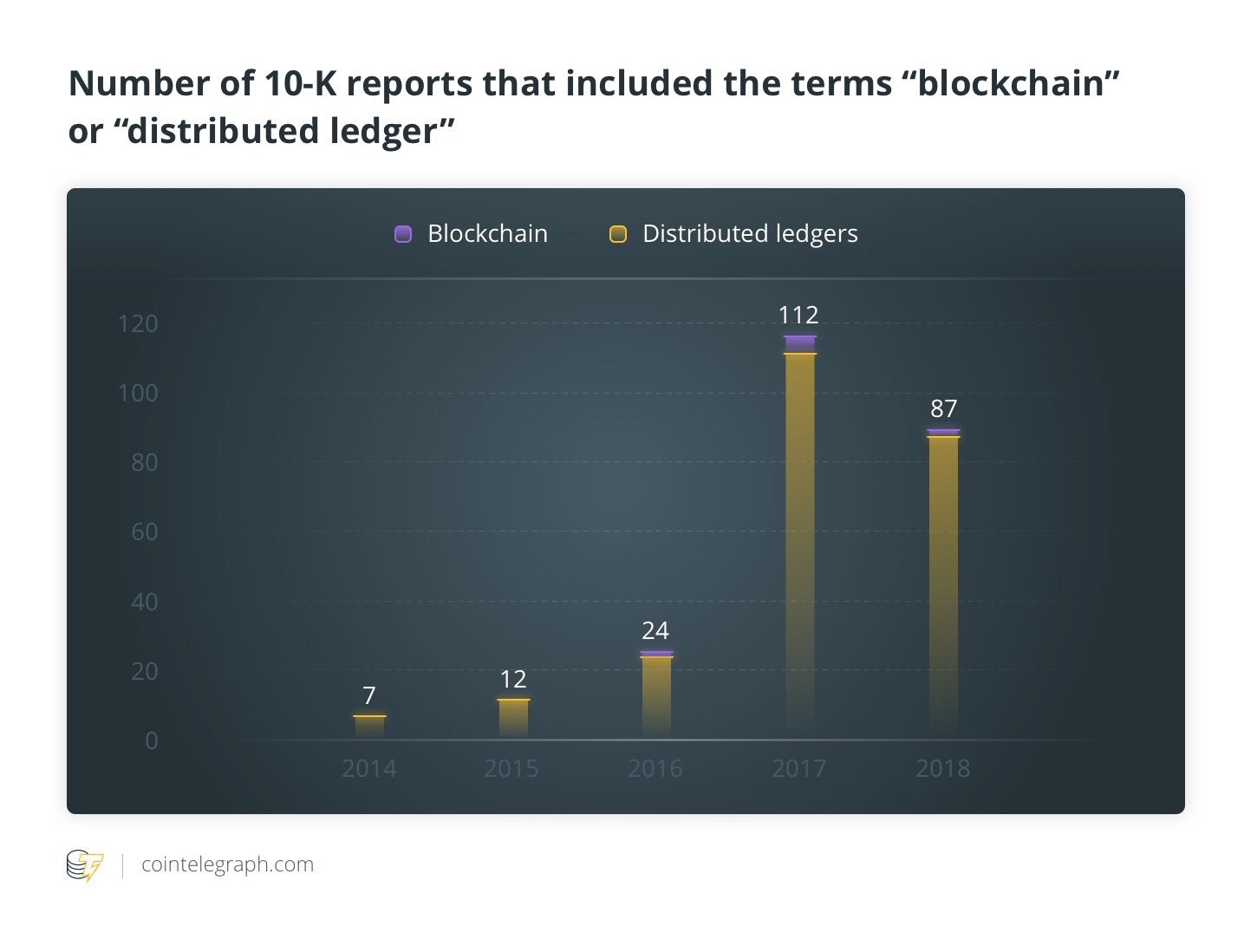 The sizeable drop in mentions of these words in the 2018 10-K reports corresponds to the precipitous drop in the value of cryptocurrencies, the overall market cap of which fell to $134 billion — down nearly 90% — by the start of 2019. The dual decline seems more than coincidental, even though enterprise blockchain applications are very different than those for cryptocurrency.

In contrast to the vast majority of corporations not writing about blockchain technology (or saying very little), a few of the 10-K reports surveyed are from blockchain startups, and thus frequently mentioned blockchain. The five startups that most frequently mentioned blockchain were BTCS, Long Blockchain Corp., UBI Blockchain Internet, Blockchain Industries and Riot Blockchain Inc. Note that in Table 1, only substantive uses of the term blockchain were counted, not when it was mentioned as part of the company’s name. All five of these are small organizations focused on blockchains, with the number of full-time employees ranging from two to 25 people. As required by Form 10-K, these corporations all acknowledged the risks of immature blockchain technologies in their reports. 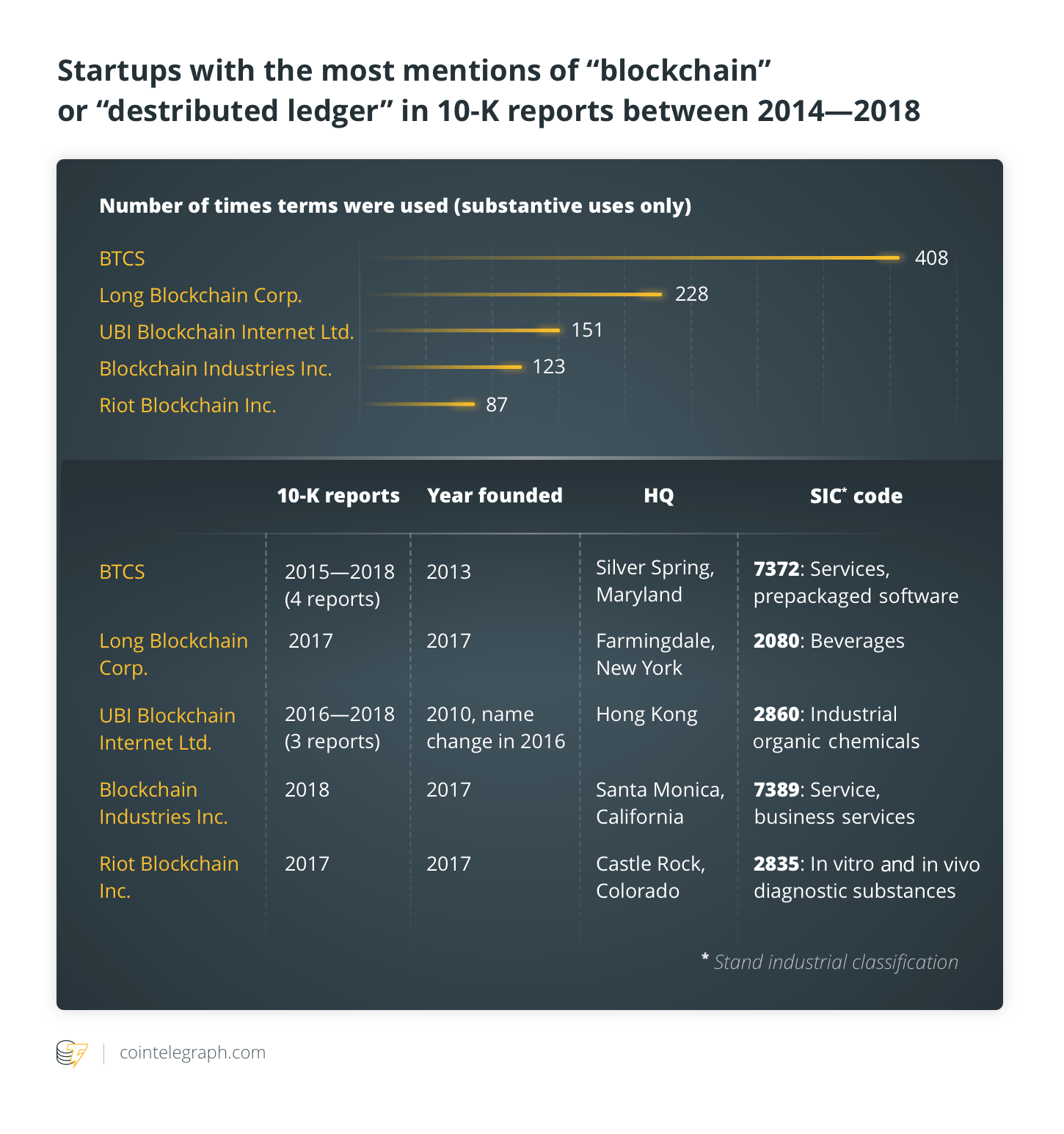 Mary Lacity is a Walton professor of information systems and the director of the Blockchain Center of Excellence at the University of Arkansas.

Kris Allee is an associate professor of accounting and Garrison/Wilson Endowed Chair at the University of Arkansas.

Yaping Zhu is a Ph.D. student in the information systems department at the University of Arkansas.