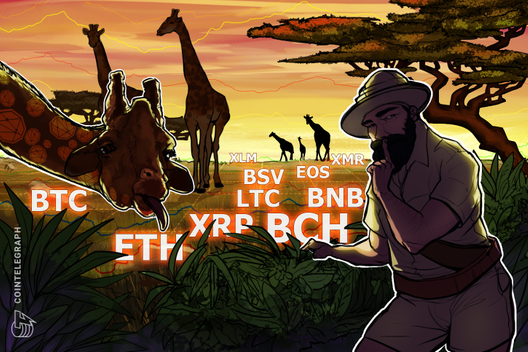 Bitcoin is at a critical level. A breakdown might hurt sentiment across the crypto universe.

Vertical moves are unsustainable in the long run. Hence, it is always better if there are consolidations in between because those levels act as a floor during corrections. Tim Draper believes that the consolidation might delay Bitcoin’s eventual rally, but he remains steadfast in his target of $250,000.

Nicholas Gregory, CEO of blockchain firm CommerceBlock, has warned that a no-deal Brexit will “create turmoil and volatility across two major fiat currencies,” which will seal Bitcoin’s place in the global economy as the vulnerability of fiat currencies becomes apparent.

Bitcoin has outperformed all other asset classes during the ongoing trade war between the United States and China. Grayscale Investments did a study, which shows that Bitcoin is uniquely poised to act as a safe haven due to its value potential and its spending characteristics. Additionally, unlike other safe haven assets, it has the potential to grow as it is a new technology. Therefore, Grayscale believes that the leading cryptocurrency is a good addition to long-term investment portfolios.

Though Bitcoin (BTC) has sustained above the downtrend line for the past three days, it has failed to pick up momentum. This shows hesitation among traders close to $12,000. If the price fails to break out of $12,304.37 and resume its up-move, bears will try to sink it back below the moving averages in the next few days.

If the BTC/USD pair breaks down of the moving averages, it can correct to $9,727.55 once again. Therefore, we suggest traders raise the stop loss on the long position to breakeven.

Conversely, if bulls defend the support at the downtrend line, we anticipate another attempt to resume the up-move. A breakout of $12,304.37 can propel the price to $13,973.50, with minor resistance at $13,156.96. Both moving averages are sloping up and  the RSI is in positive territory, which shows that bulls still hold the advantage. Hence, we are not proposing to book partial profits at current levels.

After failing to break out of the overhead resistance at $235.70, Ether (ETH) has declined to the uptrend line. It has not broken below this line since February of this year. Therefore, a breakdown will be a negative sign and will signal the end of the uptrend.

The next support on the downside is at $192.945. If this fails to hold, the ETH/USD pair might plummet to $164 and below it to $150. Conversely, if the support at $192.945 holds, the pair might remain range-bound for a few days. It will gain strength on a breakout and close (UTC time) above $235.70. Until then, it remains at risk of collapsing to lower levels. As the trend is inconclusive, our buy recommendation given in an earlier analysis stands canceled.

XRP has broken down of the immediate support at $0.30. Therefore, we have withdrawn the buy recommendation given in an earlier analysis. The cryptocurrency can now drop to the critical support of $0.27795. This level has held on five previous occasions since mid-December last year. Hence, we anticipate the price to bounce off it once again.

The strength of the bounce will give us a clue as to whether the support will hold or crack. If the rebound off $0.27795 is weak, it will indicate a lack of buying interest among bulls and will increase the probability of a breakdown. The XRP/USD pair will start a new downtrend below $0.27795 that can drag it to $0.19.

Bitcoin Cash (BCH) has broken down of the uptrend line of the ascending triangle, thus invalidating the bullish pattern. It can now drop to the support line of the ascending channel. The traders can keep the stop loss on the long position at $300. We are not recommending to close the position at current levels because sometimes the breakdown quickly reverses and proves to be a bear trap.

The BCH/USD pair will signal strength if it quickly reverses direction from current levels and rises above the overhead resistance of $345.80. Until then, it remains at risk of turning lower. The pair has formed a large head-and-shoulders pattern that will compete on a breakdown of the neckline of the pattern. Below that level, the digital currency will become extremely negative.

Litecoin (LTC) has corrected to the important support of $83.65. We anticipate the bulls to defend this level. If this level holds, bulls will try to keep the price inside the range of $105.676–$83.65.

Both moving averages are sloping down and the RSI has dipped back into the negative zone, which shows that bears are back in action. A break below $83.65 will be a negative sign that can drag the LTC/USD pair to $76.7143. Below this level, the next support is at $69.9227, which is the 61.8% Fibonacci retracement level of the recent rally. The pair will signal strength on a breakout and close above $105.676. Until then, we suggest traders remain on the sidelines.

Binance Coin (BNB) broke above the uptrend line on Aug. 8 but it could not cross and sustain above the 50-day SMA. The 20-day EMA has flattened out and the RSI is just above 50, which points to a consolidation in the short term.

The boundaries of the range might be $24.1709 on the downside and $32.50 on the upside. A breakout of the range is likely to propel the BNB/USD pair towards lifetime highs. Therefore, we retain the buy suggested in the previous analysis. Conversely, if bears sink the pair below $24.1709, the next level to watch on the downside is $18.30. We might get better clarity in the next few days.

Both moving averages are sloping down and the RSI has dipped into the negative zone, which indicates that bears have the upper hand. However, if bulls defend the $3.8723–$3.30 support zone, the EOS/USD pair might consolidate for a few days. The first sign of strength will be a breakout and close above $4.8719. Until then, we suggest traders remain on the sidelines.

The bulls have failed to push Bitcoin SV (BSV) above the 20-day EMA. It has re-entered the descending channel, which is a bearish sign. We now expect bears to attempt a breakdown of $136.890. If successful, the decline can extend to $107, below which a drop to $85.338 is possible.

Both moving averages are trending down and the RSI is in the negative territory, which shows that bears have the upper hand. Nevertheless, if the bulls defend the support at $136.890, the BSV/USD pair will again try to break out of the 20-day EMA. A rally above $160.35 will indicate a probable change in trend. We suggest traders wait for a change in trend before attempting to buy it.

Monero (XMR) has not been able to break out of the immediate resistance of $98.2939 for the past three days. The price might now dip to the 20-day EMA. If the support holds, we anticipate another attempt by the bulls to push the price above $98.2939. The 20-day EMA is sloping up and the RSI is in the positive zone, which shows that buyers have the advantage in the short term.

On crossing $98.2939, the next level to watch on the upside is $107. Above it, a retest of $120 is possible. However, if the XMR/USD pair breaks below the 20-day EMA, it will weaken and can drop to $77. Therefore, we suggest traders trail the stops on the long position to $77. We will raise stops again if the sentiment weakens further.

Failure to bounce off a strong support is a bearish sign. Stellar (XLM) has broken down of the first support at $0.076. It has now dropped to the critical support of $0.072545. If this support also cracks, the digital currency will start a new downtrend that can drag it to $0.05.

With both moving averages trending down and the RSI close to the negative zone, the path of least resistance is to the downside. Our bearish view will be invalidated if the XLM/USD pair rebounds sharply from $0.07245 and scales above the 20-day EMA. If that happens, bulls will try to push the price to the 50-day SMA. We will wait for buyers to return before proposing a trade in it.