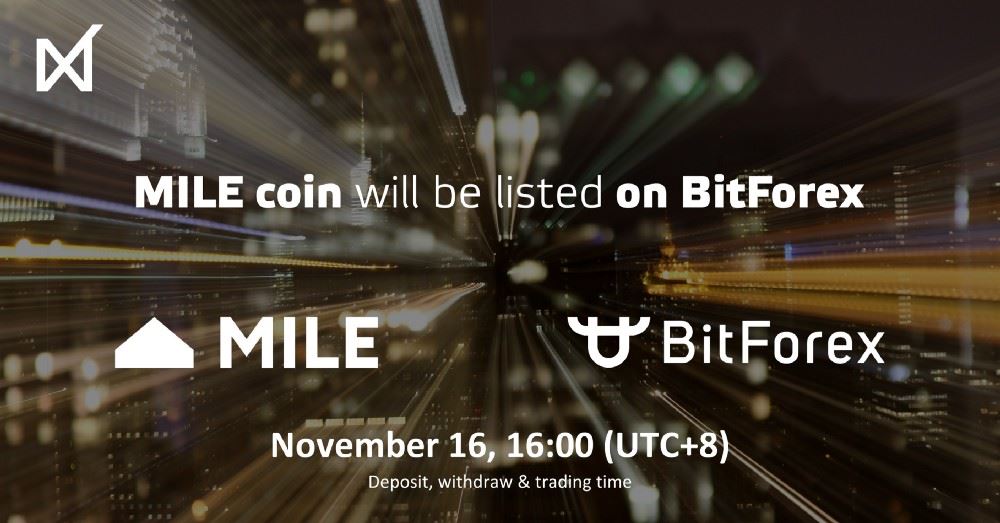 BitForex has listed MILE on their exchange. It’s a deflationary cryptocurrency tied to a new stablecoin, XDR. MILE carries a 0.01 MILE transaction fee, while XDR transactions are free. While the market for stablecoins is already crowded, George Goognin, a board member and global ambassador for the Mile Unity Foundation believes that this coin pairing will solve serious problems with cross-border commodity trade, investments and payments in emerging economies, with the added benefit of reducing social tension around the world. According to Goognin, “The goal of Mile Unity Foundation is to provide a liquid tool for the cross-border trade, investment and remittance, so it’s very important to empower the community with exchange facilities in different countries.”

Goognin is a serial entrepreneur who began his career at the age of 9, when he sold pens on the streets of Russia. By age 14, he was working as a freelance software developer and in 2008, he participated for the first time in launching a startup, Rusavtobus, where he developed and managed the team behind a public transport search engine. According to Goognin, the project was such a success that it was recognized personally by Russian President Vladimir Putin.

Goognin later managed a digital agency with online banks, fintech companies and others as clients. He found their processes and technologies too outdated and questioned why they were wealthy, when other smart people were not. He soon needed funds for his next business, applied for loans from 23 banks, and was rejected by all of them. He thought, “This could be a huge market. I can’t be the only one with these issues.” He then researched the finance industry and found that peer-to-peer (P2P) lending to Small and Medium Enterprises (SME) is projected to grow to nearly half-a-trillion dollars in loans by 2022, according to Allied Market Research.  This motivated Goognin to launch his next project, a global platform for P2P SME loans.

Goognin bootstrapped a P2P fund for SME loans in 2014, which grew to $5M over three years. After meeting  a number of crypto-evangelists, Goognin co-founded Karma, a global cross-border P2P lending platform. The team raised $500k USD for this project in August 2017, and then $10M in December 2017 through crowdfunding.

In producing the white paper for Karma, Goognin saw the need for a stablecoin to complete the model. This was followed by a search for the right algorithm for almost a year, until he was contacted online by the anonymous community, Lotus Mile at the end of 2017, with a new consensus algorithm. After testing the algorithm on a public network of thousands of nodes for almost a year, the Mile Unity Foundation was announced as a way to help governments and enterprises to understand and adopt this new technology.

The MUF team affirmed their belief in the XDR stablecoin algorithm when one of the foundation’s ambassadors attended a conference with several dozen stablecoin startups. They determined that most other stablecoins were centralized digital deposit receipts, which created more risk for coin investors than utilizing traditional bank accounts for their fiat currency deposits, due to the legal status of each organization and funds stored in bank accounts, subjecting them to legal and regulatory issues. In addition, they were built on older, slower networks like Bitcoin and Ethereum.

Unlike other stablecoins that are pegged to the USD and other fiat currencies, the XDR stablecoin is pegged to Special Drawing Rights (XDR, or SDR). These are “supplementary foreign-exchange reserve assets defined and maintained by the International Monetary Fund (IMF).” Unlike an actual currency, the IMF XDR are allocated to IMF member nations and are not actually held or used. It is therefore not subject to inflationary tactics like fractional reserve banking that influence the value of the USD and other fiat currencies that stablecoins may get pegged to. Goognin said that other stablecoins are also subject to other factors that may render them worthless. Besides commodity trades where investors may short the USD, Goognin said that when stablecoins are tied to fiat assets held in banks, regulators could freeze those funds, putting investors at substantial risk. With this in mind, the XDR stablecoin is not tied to a single organization and has no fiat assets. Like Bitcoin, it is completely decentralized and entirely based on social and mathematical consensus.

Unlike most cryptocurrencies that are volatile and subject to emotional trades, XDR was designed to have a use-case in a real economy. Goognin stated that this will lead to greater stability, making the coin ideal for cross-border commodity trade, investments and money remittance. Unlike the Ripple blockchain used for x-border payments, XDR is uncensored. There is no company tied to the actual blockchain, so it is not limited in where payments may be serviced around the world. As SWIFT blocks payment transfers to certain countries and companies, and BIS has only 60 countries participating out of nearly two-hundred recognized countries in the world, the neutral aspects to XDR give it access to global markets that are lacking in this capability. According to Goognin, pilot programs are already planned in Japan, Uganda, Turkey, Kazakhstan, Russia, and the Republic of San Marino. Currently, partnership agreements for using the MILE ecosystem exist with several organizations, including BRICS, G-Global and the Silk Road Association.

The MILE/XDR ecosystem is slightly similar to a proof-of-stake (POS) model, where stakeholders earn interest on their coins over time. People deposit their MILEs into a network account and are rewarded with XDR immediately. However, unlike POS where a small group of majority shareholders can manipulate markets, in MILE blocks are signed and validated by one of the 10,000 master nodes being randomly picked. Goognin said that this gives no single stakeholder an advantage, and eliminates corruption while simultaneously making it more difficult to hack than a traditional POS model. While Goognin is confident in the hackerproof nature of the model, the foundation has sponsored hackathons to discover bugs, and will continue to do so. As with other cryptocurrencies, should an issue be discovered, a hard fork is entirely possible.

Goognin is most excited by what he describes as the truly decentralized nature of the two coins. The Mile Unity Foundation is similar to the Bitcoin Foundation, in that it is not an owner or author, but rather, an NGO that served as the first backers of the coin. He stated that the algorithm has its equivalent to the mysterious Satoshi Nakamoto and is supported by an anonymous community named Lotus Mile.

At present, only MILE is listed on Bitforex. At $1.70 per MILE and a circulating supply of 1B coins, MILE has a total market cap equivalent to $1.7B USD. XDR may be added in the future, but Goognin wants to keep it stable by protecting it from the hype associated with new coin listings on the exchanges. Future plans include launching a 501(c)(3) nonprofit NGO in the US. This could open up the project to receive grant money from organizations like the Gates Foundation, Rockefeller Foundation or World Bank, which have funds available for investing in emerging economies for financial inclusion.

By providing  equal access to the financial tools like P2P loans, x-border payments, settlements, investments and money remittance for emerging economies, MUF ultimate goal is to reduce terrorism and increase the consciousness of humanity. They believe that people become radicalized when they are poor and lack resources. MILE and XDR in their view could help provide the people in developing nations with access to basic resources like financing, energy, food, and water. With this comes a change in lifestyle, where people measure their lives not according to capital gains, but according to their own contributions to society at large.