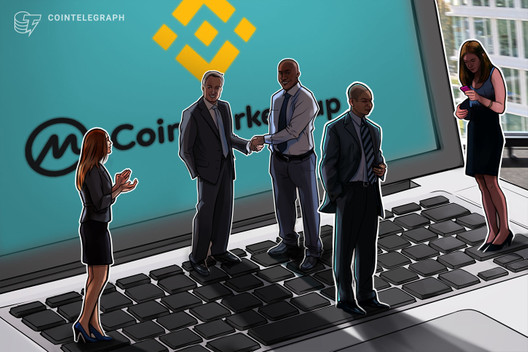 Experts believe that Binance’s acquisition of CoinMarketCap is a sign that the crypto industry is dealing with the ongoing market collapse well.

Despite markets all over the world facing ever-worsening economic troubles amid the ongoing coronavirus pandemic, it seems as though the crypto industry has been able to weather the storm, at least thus far. In this regard, Binance — the world’s largest cryptocurrency exchange — has recently reached an agreement to acquire CoinMarketCap, one of the most prominent crypto data websites.

The official announcement was made by both companies on April 2, with Binance CEO Changpeng Zhao telling Cointelegraph that CMC and Binance have from the very start been working to make the crypto ecosystem more accessible to people all over the world. Additionally, he also believes that this latest deal will help the two companies build on each other’s strengths, as well as make the industry more transparent and approachable.

Zhao further pointed out that his team had been in discussions with CMC for a few months and that he could not comment on the financial aspect of the deal since it has been legally secured using a non-disclosure agreement. With that being said, it is rumored that the buyout is worth an astonishing $400 million.

What to make of it all?

Providing his thoughts on the matter, Eric Benz, the CEO of Changelly, a crypto exchange, told Cointelegraph that having known the CoinMarketCap team for many years now, he is confident that this deal will benefit both parties. In his view, the timing of the agreement for Binance couldn’t have been better, as the impact of the coronavirus is being felt across many different industries. He added:

“If there was any acquisition to be made in this crypto climate, then CMC was it. Binance has done a wonderful job to make this happen and also wish them the utmost success in making this platform even better for its users. On the one hand, it might appear to be a one-sided deal, but on the other, it shows just how important crypto market data is, and this is merely the beginning of the merger and acquisition phase of crypto.”

A similar outlook is shared by Mike Alfred, the CEO and co-founder of Digital Assets Data, a fintech firm, who told Cointelegraph that Binance is among the strongest and most respected companies currently operating within the crypto ecosystem, and thus it came as no surprise that they are acting decisively during a period when many firms have become quite limited in their overall operational and financial capacities. Alfred further opined:

“The deal is highly strategic on multiple levels and will put Binance in an even more powerful position relative to other exchanges when BTC heads back towards all-time highs.”

Will the acquisition skew CMC’s operations?

Ever since the aforementioned news became mainstream, Binance has stated on several occasions that CMC will continue to operate as an independent business entity. In fact, CZ has claimed that the acquisition will not change CMC’s independence from external stakeholders, suggesting that his company’s actions will not have any sort of impact on the data platform’s rankings whatsoever.

However, in the short term, CMC will face minor internal restructuring, as the company’s founder and current CEO, Brandon Chez, will step down to be replaced by CMC’s current chief strategy officer, Carylyne Chan — who will serve as the interim CEO.

According to David Wachsman, the founder and CEO of Wachsman, a blockchain PR firm, CMC’s new CEO, Carylyne Chan, has earned a global reputation as an executive who values transparency and fairness above all else. Moreover, from a commercial perspective, Wachsman told Cointelegraph that any skewing of results — on Binance’s behalf — would inevitably result in a deleterious effect on CMC’s traffic, including the usage of the firm’s proprietary data in price oracles. Wachsman further added:

“Binance’s acquisition of CoinMarketCap is a clear signal that major crypto media sites and trusted digital asset data companies –– those with strong numbers and a sticky user base –– have marketable equity value. Because of the executive team’s integrity and because the value of the CoinMarketCap property is based on trust in that data, I am convinced that CMC will stay the course as an independent organization.”

Similarly, Erick Pinos, the American ecosystem lead at Ontology, a public blockchain project and distributed trust collaboration platform, told Cointelegraph that similar company acquisitions made by Binance in the past have until now continued to operate as separate entities.

However, he did concede that most of these projects have ended up integrating one or more of Binance’s native offerings into their core service portfolio — Trust Wallet, for example, is a multi-token wallet that added Binance’s DEX after it was bought out by the crypto giant. Pinos further stated:

“I would imagine there will be more links throughout CMC to Binance, perhaps encouraging users to sign up for Binance to trade the tokens they are looking at. If CMC’s rankings became partial to Binance, it would quickly be detected by the community. I think it’s likely that we will see Binance carry out subtle and small integrations over a longer period of time.”

How does the buyout affect CMC and Binance?

From a purely monetary perspective, the deal seems to make sense for CMC since the platform already has a steady revenue-generating business with its advertisements and paid API plans.

Providing his technical insights on this issue, Jason Wu, the founder and CEO of DeFiner.org, a decentralized lending platform, told Cointelegraph that Binance is constantly looking for ways to penetrate the United States market. In this regard, he pointed out that in February 2020, CoinMarketCap registered 5.19 million visits from American users, which is roughly 14.1% of the company’s web traffic, while Binance only had 8% of its web traffic come from the U.S. — roughly translating to around 1.9 million web hits. He added: “Acquiring CMC will help Binance grow its U.S. user base. For CMC, this acquisition will help them grow in other regions as well.”

Additionally, Wachsman believes that CoinMarketCap now has an enviable array of options when it comes to becoming increasingly commercialized. For starters, as an online advertising platform, it is still a good option for those looking to get their message across to crypto enthusiasts in a multitude of regions. Moreover, Wachsman highlighted that financial support from Binance may only increase CMC’s attractiveness as well as turn the data platform into a major generator of leads for new registrants.

Lastly, enumerating the reasons why Binance went ahead and bought CMC amid such uncertain times, Piers Ridyard, the CEO of Radix DLT, a high-throughput protocol, told Cointelegraph that Binance acquired CMC primarily because of two key factors: namely customer acquisition and data flow. He added:

“While Binance will increase CMC’s brand equity as much as it can over the coming years, they will do that because of the huge benefit they reap in user acquisition and better data about the whole market. Another way of thinking about it is this vs. 10 years of Google Ad spending for Binance. $40M per year in ad spending is probably substantially cheap vs. their new cost per acquisition if Binance and the CMC team keep building the CMC brand.”

Furthermore, Ridyard believes that CZ has a long-term plan in mind with respect to this acquisition, and as time passes, he will most likely use this opportunity to squeeze a number of his company’s core competitors out of the market. Also, he expects to see the industry continue on its current path of consolidation, wherein cash-rich buyers will continue to “snap up good strategic plays at cheaper prices.” Ridyard closed out by saying:

“The CMC acquisition is likely firstly a data play — giving Binance some massively key insights into the market beyond its own user base. Beyond that, I think that CMC’s user-facing operations will be unchanged; for exchanges, the story might shift substantially in the next couple of years.”

Even though a huge portion of the global crypto community seems to believe that this latest acquisition by Binance is a sign of the crypto industry becoming stronger, Evgen Verzun, the founder of HyperSphere.AI, a decentralized cloud, told Cointelegraph that the deal is just a mere reflection of the coronavirus-induced economic crisis that is forcing investors and businesses to find new ways to save their money.

The aforementioned comment seems to be in line with recent reports that suggested that CoinMarketCap had been facing quite a few financial constraints since 2019 — even forcing the company to carry out its day-to-day operations with minimal monetary resources. For example, in October 2019, Chan stated that CMC was going to continue with its policy of “bootstrapping and scaling” in the foreseeable future.