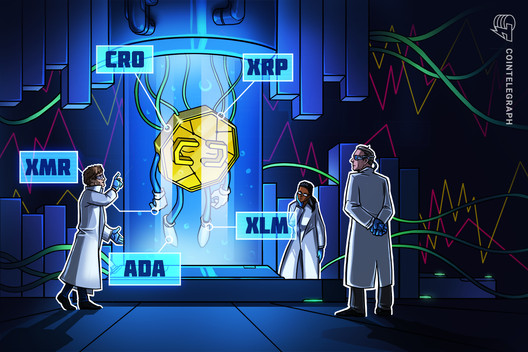 Most top performers are attempting to climb back after a sharp sell-off. If they can sustain above their immediate overhead resistance levels, a bottom is likely to be confirmed.

The coronavirus pandemic has only worsened this week and has engulfed almost the whole world. Several countries in Europe and the US have been the worst affected outside of China where the virus started. While the world attempts to tackle the spread of the virus by lockdowns, it is having a huge negative impact on the economy.

In order to support the economy, the US announced a stimulus package of $2.2 trillion, which is the largest in history. Meanwhile, the Fed’s balance sheet continues to swell and has crossed $5 trillion in assets.

While these efforts are a great morale booster in the short-term, they are likely to result in a financial crisis down the road, which cannot be handled just by printing more money. As the investors realize this, they are likely to enter the crypto space, which can not be manipulated by the governments at will.

A user poll of “VIP” crypto traders on Kraken shows that the traders expect Bitcoin (BTC) to hit an average price of $22,866 by the end of this year. About half of the participants expect the SEC to approve a Bitcoin ETF this year. It is not only Bitcoin that traders are positive on, but about 50% of the respondents also forecast an altcoin season for 2020.

Another bullish indicator is that the total number of wallets holding a whole Bitcoin has reached 800,000. This is a positive sign as it shows that investors are using the current low prices to accumulate. Do the technicals of the top five performers of this week also show signs of accumulation? Let’s study the charts.

Along with giving handsome interest rates, the payments and cryptocurrency platform announced collaborations with three tax providers to assist its users in cryptocurrency tax reporting.

The rebound from the recent lows of $0.0245 broke above the 20-week EMA at $0.045 but could not rise above the 50-week SMA at $0.049. This shows that the bears are aggressively defending the moving averages.

Currently, the price has dipped back below the 20-week EMA, which shows selling at higher levels. The 20-week EMA has flattened out and the RSI is just below the midpoint. This suggests a consolidation for the next few days. The CRO/USD pair might remain stuck between $0.050 and $0.0245.

Our view will be invalidated if the price turns down from the current levels and plunges below the support at $0.0245. A breakdown of this level will be a huge negative as it will start a new downtrend.

Monero (XMR) was the second-best performer of the past seven days with a rally of about 13%. It has made a sharp recovery in the past few days and is now attempting to find a place among the top ten cryptocurrencies by market capitalization. What does its chart suggest? Let’s find out.

The sharp selling on March 12 and 13 plunged the XMR/USD pair below the critical support of $38.83. While a drop to a multi-year low is a huge negative, we like the way the price quickly recovered from the lows of $25.3118. This shows strong buying at lower levels.

After two weeks of failed attempts by the bears to resume the downtrend, the pair started a relief rally this week. The bulls pushed the price above the first overhead resistance of $44.50, which is a positive sign.

On the downside, we expect the bulls to provide strong support at $38. However, if this level cracks, a  retest of the recent low at $25.3118 is possible.

XRP, with a rally of about 12%, turned out to be the third-best performer of the past seven days. This week saw two different groups of scammers targeting XRP users.

The research team “xrplorer forensics” claimed that a fraudulent Google Chrome extension has allegedly stolen about 1.4 million XRP from the users. In another scam, a bogus YouTube account impersonating Brad Garlinghouse, CEO of Ripple, was seen promoting a fake giveaway.

However, on a positive note, Ripple Labs announced a donation of $100,000 each to two non-profit organizations to aid the fight against coronavirus.

The XRP/USD pair has broken out of the descending channel, which is a positive sign. This signals a possible change in trend.

Currently, the bears are attempting to stall the relief rally at the horizontal resistance of $0.17468. If successful, the pair might again dip towards the recent lows of $0.12750 and below it $0.1140.

If the lows hold once again, the pair might remain range-bound for a few weeks. However, if the bears sink the price to new lows, it will be a huge negative.

On the other hand, if the bulls can sustain the price above $0.17468, it will indicate that the markets have rejected the lower levels. The first level to watch out for is the 20-week EMA at $0.225 and if this is crossed, a move to $0.31503 is possible. The traders can wait for the pair to close (UTC time) above $0.17468 before turning positive.

Cardano (ADA) moved up by about 4% in the past seven days and took the fourth spot among the best performers. Cardano launched its off-chain scalability protocol, Ouroboros Hydra, which according to the company can “theoretically scale to a million transactions per second – comfortably in excess of current global payment systems such as VISA.”

Cardano founder Charles Hoskinson criticized Wikipedia for not allowing an article in the English language for Cardano, though several other major cryptocurrencies have one.

While a new multi-year low is a bearish sign, we like that the price did not stay near the lows for long. This shows that the bulls bought the dip instead of panicking and dumping their holdings.

Currently, the bulls are attempting to push the price back above $0.030 but are struggling to sustain the price above it. This shows that the bears are unwilling to give up without a fight. The failure to sustain above $0.030 might attract another round of selling.

Stellar Lumens (XLM) was the fifth-best performer with a rally of just under 3%. Can the bulls carry the price higher or will the altcoin turn around and dip to new yearly lows? Let’s study its chart.

The XLM/USD pair is attempting to recover from its multi-year low of $0.026063. However, the bears are unlikely to give up without a fight. They are aggressively defending the overhead resistance of $0.042133.

If the price turns down from the current levels, the bears will once again attempt to start a new downtrend. A break below $0.026063 will be a huge negative.