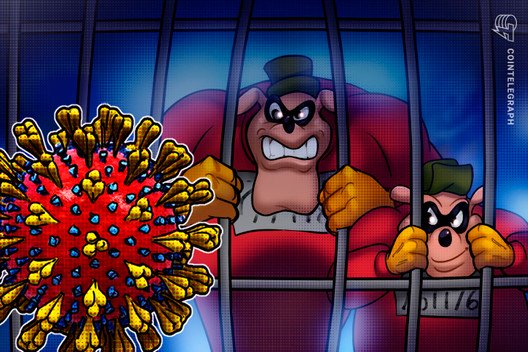 The alleged operators of the $722 million BitClub Network Ponzi scheme have requested their release from a New Jersey jail amid concerns over the coronavirus.

Two alleged crypto Ponzi scheme operators have requested that a New Jersey federal court grant their release from jail over concerns that the facility will soon host a COVID-19 outbreak.

Goettsche’s attorney, Rodney Villazor, said, “it is not a matter of ‘if’, but ‘when’” the corrections facility hosts a coronavirus outbreak. He argues that once the virus reaches the jail, “it will be nearly impossible to stop its spread,” adding that “the risk to Mr. Goettsche’s health and safety grows with each day that he remains incarcerated” at the facility.

According to Weeks’ representation, the county jas has “an exceptionally poor record of maintaining detainee health.”

He cited the findings of the United States Department of Homeland Security’s Office of Inspector General, who last year reported that the facility poses “significant threats to detainee health and safety.”

“Given the noted risks of illness through inadequate food service and environmental safety at the Essex County Correctional Facility, a swift outbreak of COVID-19 at the facility is virtually inevitable.”

The lawyers also argued that a lock-down at the facility would make it impossible for the suspects to comply with discovery requests in their ongoing proceedings.

Goettsche, Weeks, and two other defendants are accused of operating a $722 million Ponzi scheme from 2014 until December 2019 under the guise of running the cryptocurrency mining pool BitClub Network.

The group allegedly solicited funds from investors in exchange for purported shares in their mining pools, also offering referral bonuses to those who recruited new members. The prosecution accused BitClub of distributing false and misleading documentation to investors that claimed to demonstrate profits generated by the mining pool.

Goettsche and Weeks are charged with conspiracy to commit wire fraud, while all four of the scheme’s operators face charges of conspiracy to sell unregistered securities.