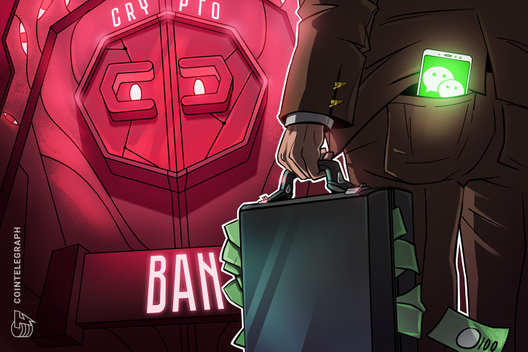 On May 7, Dovey Wan, founding partner of crypto investment firm Primitive Ventures tweeted that the Chinese social media behemoth and payment service provider WeChat is set to ban merchants from making cryptocurrency payments. This ban marks the latest effort to stymie cryptocurrency usage in China, with the government also mulling over ways of greatly decreasing the presence of crypto mining on its soil.

A rough translation of the Payment Service Protocol found on weixin.qq.com indicates that the ban is a result of changes regarding payment management and measures to ensure “the prevention of illegal telecommunications networks and criminal matters,” brought about by the People’s Bank of China.

Although the screenshot tweeted by Wan does not explicitly label cryptocurrency transactions as illegal, the text states that users who engage in crypto trading will have their accounts terminated. As per the screenshot, “merchants may not engage in illegal transactions such as virtual currency,” along with other restrictions not related to fintech.

As most over-the-counter (OTC) trades conducted in China take place via WeChat, Wan predicted that the ban “may impact local liquidity to quite some extent.”

Changpeng Zhao (aka CZ), CEO and founder of the cryptocurrency exchange Binance, said that, although he believes the restrictions were imposed on the company externally, there is still room for optimism. CZ wrote that this will not, in his view, have a negative effect in the long term.

This is a classic example of short term pain, long term gain.

It is inconvenient for people short term, and they take a hit. But long term, it is precisely this type of restriction of freedom that will push people to use crypto. Not a bad thing.

CZ also said that the WeChat user experience was positive overall and would be hard to beat if the company took on a more transparent approach.

Honestly, it would be hard to beat WeChat pay if they are relatively open. (The UX is good). But more and more restrictions are forced upon them (probably not their own choice). Go #crypto!

Some members of the crypto community expressed their frustration at the news of the WeChat ban, however, and CZ retweeted one of his previous comments regarding situations that can initially seem depressing in the crypto world.

No need to worry. Some negative news often turn out to be positive in the long term. Chinese have a proverb for this. New (often better) opportunities always emerge during times of change.

In Q4 2018, WeChat Pay reported a total daily transaction volume of over 1 billion in unspecified currency. The total number of service users allegedly amounted to 1.098 billion. The technology news outlet TechNode reports that the usage is widely spread across different age groups, with 98.5% of Chinese people between the age of 50 and 80 using the app.

The new cryptocurrency policy comes into effect on May 31.

Although China has a well-established reputation for its hostility toward cryptocurrency, some experts now believe that the Chinese renminbi (RMB) will, itself, become a cryptocurrency.

In an interview with Bloomberg, the Blockchain Research Institute executive chairman, Donald Tapscott, explained that, according to the vice-chairman of the Communist Party, President Xi Jinping envisions blockchain technology playing a central role in the future of the country. Commenting on the country’s legal stance on cryptocurrency and mining, Tapscott added:

“It’s not really necessary to do that [to ban exchanges and mining] because in 20 years we are not going to be using bitcoin in China. Chinese people will use the RMB, only the RMB will become a cryptocurrency. The central bank of China will turn it into a digital currency.”

“Decentralized exchanges will dominate over the centralized ones, because you can identify this kind of bad behaviour and do something about it.”

A Reuters report published on April 9 revealed that the Chinese government is considering placing a ban on crypto mining. With the majority of the world’s most significant mining pools founded in China, the fallout from this decision could well be significant.

This is not the first instance of the Chinese government trying to curtail mining activity. In February 2018, CNN Money reported government attempts to force miners into making an “orderly exit” from the industry through taxation and by linking crypto mining to environmental dangers. These alleged environment concerns have also been echoed by the National Development and Reform Commission (NDRC), which has included crypto mining as one of the industrial activities it intends to discontinue, as it “lacked safe production conditions, seriously wasted resources, polluted the environment.” This latest targeting of crypto mining comes under the auspices of the NDRC’s Catalogue for Guiding Industry Restructuring, which has been responsible for monitoring industry in the country since 2005.

Although the NDRC appears to have mining set firmly within its sights, there is no immediate deadline for the proposed elimination of the industry. The report instead suggests that mining activity should immediately be reduced.

The government’s renewed focus on mining activity is the latest blow to the industry. Although mining once represented one of the most profitable cryptocurrency sectors, companies are now having to diversify their sources of income to stay afloat. The most notable example of this is that of Bitmain, an ASIC chip manufacturer and mining company that once dominated roughly three-quarters of the global market and operated 11 mining farms at the time of its 2018 initial public offering (IPO) filing. Less than a year on, the company added artificial intelligence to its list of products after taking a beating from the crypto bear market and a decline in profits from mining and mining hardware sales. According to the company’s former co-chief executive, Jihan Wu, this is par for the course in the current climate, stating that “as a China company, we have to be prepared.”

Should this prospective ban on mining be implemented, it’s likely to have a ripple effect on the entire global crypto industry. Mark D’Aria of Bitpro Consulting LLC, said he sees the short-term effects being “extremely disruptive”:

“There will certainly be many winners and losers in the mining industry, as non-Chinese miners would benefit in the short term from significantly reduced difficulty, and from inexpensive surplus hardware as it filters out of China.”

D’Aria added that the actual impact of the ban would depend on the timing and nature of its implementation:

“If it was decreed that all miners were to shut down immediately, all of that hashrate lost in an instant could significantly disrupt the technical operation of the Bitcoin blockchain, slowing it down significantly until the next difficulty reduction. If this ban was implemented shortly after the last difficulty adjustment, this transitional period could last months.”

Although prospects for the crypto market may well appear grim in the event that the ban would take effect, D’Aria explained that the bitcoin blockchain will recover in the long run:

“It’s yet another example of how resilient Bitcoin actually is — it can be disrupted in the short term, but long term it adjusts to compensate.”

WeChat is not the only payment provider with a history of hardening its stance toward cryptocurrency in China. In August 2018, the mobile payment app Alipay cracked down on users using Alipay accounts for over-the-counter bitcoin trading.

According to the Beijing News, Alipay tightened its restrictions and, in some instances, permanently blocked accounts using its services to conduct bitcoin OTC trades. As per the article, the company reportedly created an inspection system for “key websites and accounts.”

The company’s decision to toughen its stance on OTC trading comes against the backdrop of other trading platforms, including peer-to-peer and OTC resources being banned as part of a blanket prohibition on wider crypto trading activity since September 2017.

News about Alipay’s decision to block a number of accounts soon spread to the crypto community, with Red Li, co-founder of the Chinese crypto community 8BTC tweeting a screenshot of the announcement from Alipay, stating that “#alipay is blocking accounts involved in bitcoin otc trading.”

The same month, WeChat blocked several accounts suspected of publishing initial coin offerings (ICO), along with the official sales channel of the bitcoin mining behemoth Bitmain, due to an alleged licence violation.