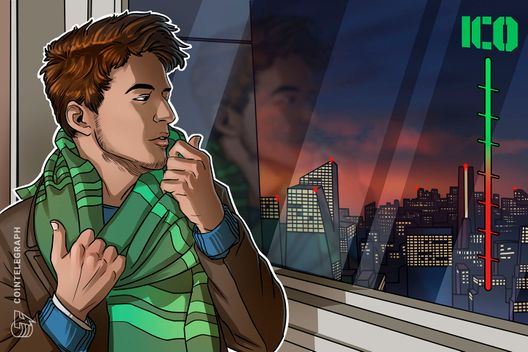 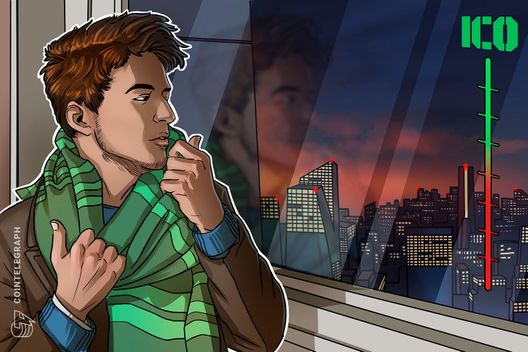 Expectations for the ICO market remain far from outcomes, nevertheless the market shows stability and some optimistic signals.

Disclaimer: This article does not contain investment advice or recommendations. Every investment and trading move involves risk, you should conduct your own research when making a decision.

The ICOmeter aims to provide the accurate and concise information about the development of the ICO market in the previous month, and its relation to the all-time statistics. The ICO market data is provided by ICObench, based upon the projects’ announcements recorded in ICObench database, which includes over 4700 ICOs since August 2015.

ICO market situation in October is the result of different trends: the inertial forces put in motion months ago, during a period of stronger confidence, seem to still be influencing the structure of the market, while the more recent negative tendency could influence the decision-making of investors.

At the same time, the final outcome seems more confident than that of September. In spite of a smaller number of ICOs ending with a positive result, as only 54 raised at least $1, versus 67 the previous month, the capital gathered has been $508.54 million versus $403.10 million, a positive gain of 26 percent. 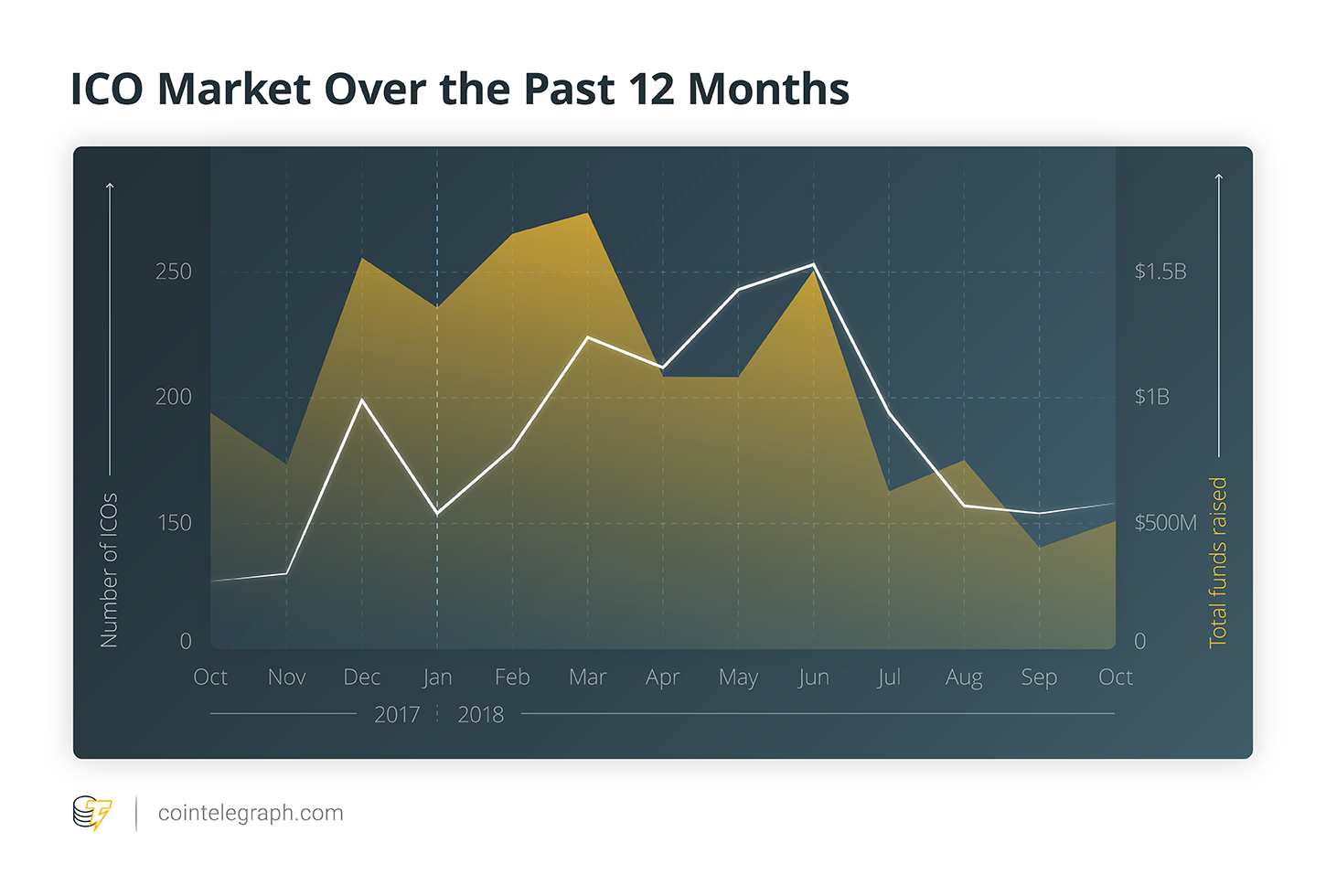 The ICO market indicators are still far from the high levels of some months ago, for instance, June 2018 record with 253 successful ICOs and $1.5 billion raised. However October shows some signs of recovery after September’s minimum. The long-lasting permanence of the Ethereum price in negative territory is still affecting the mood of the market, but the attitude of investors toward the new issuing of tokens seems to diverge slightly from the trend of the cryptocurrency, which most ICOs are based on. 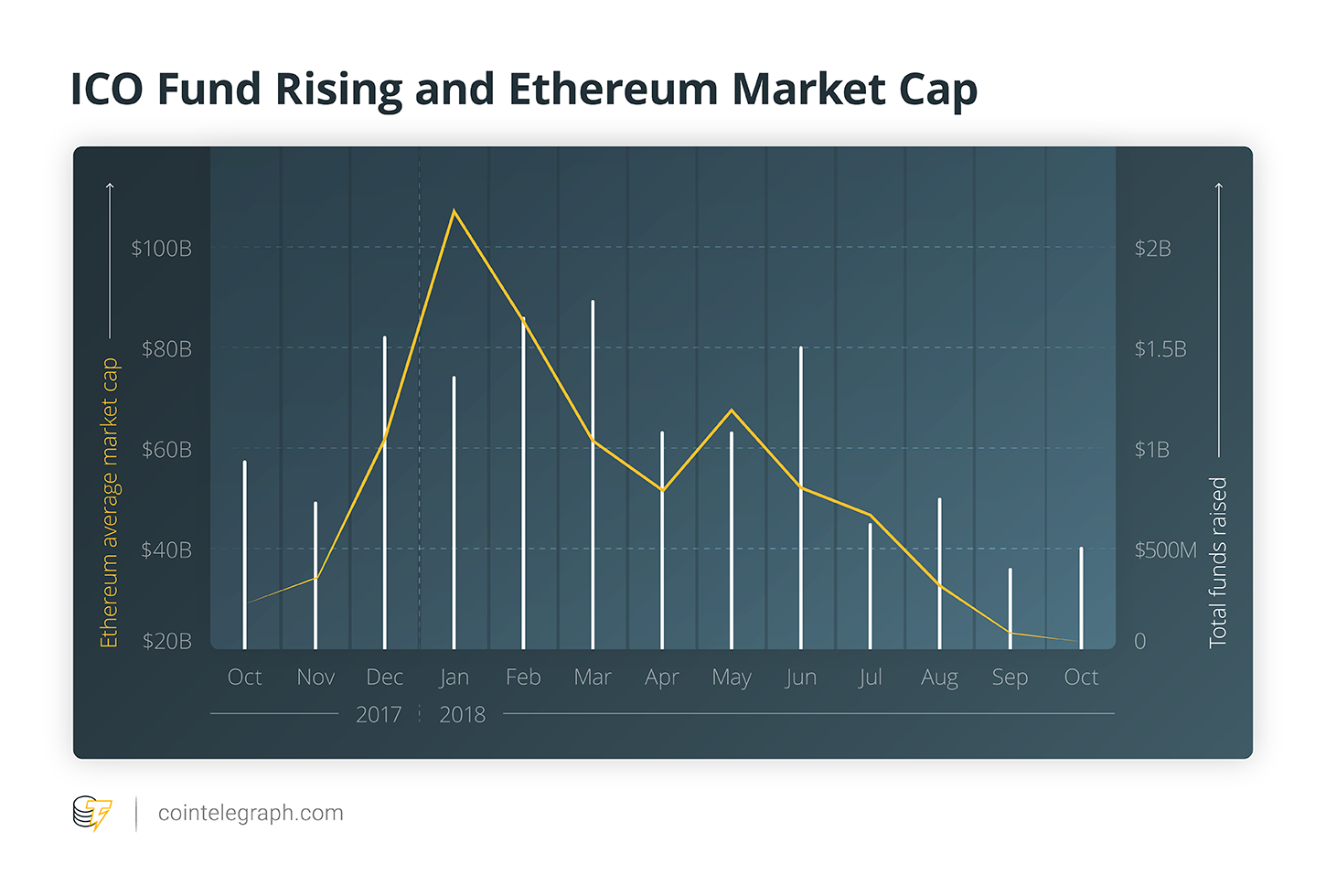 Alongside the results, it could be useful to consider the expectations, which shaped the market during October 2018. A total of 223 ICOs started during this month, versus 249 during September, and almost the same number of projects chose October for setting their end date: 158, compared with 154 ICOs ending in September, with a average of about 555 ICOs going live daily during the month, including the projects, which had started previously and were still ongoing throughout the month. 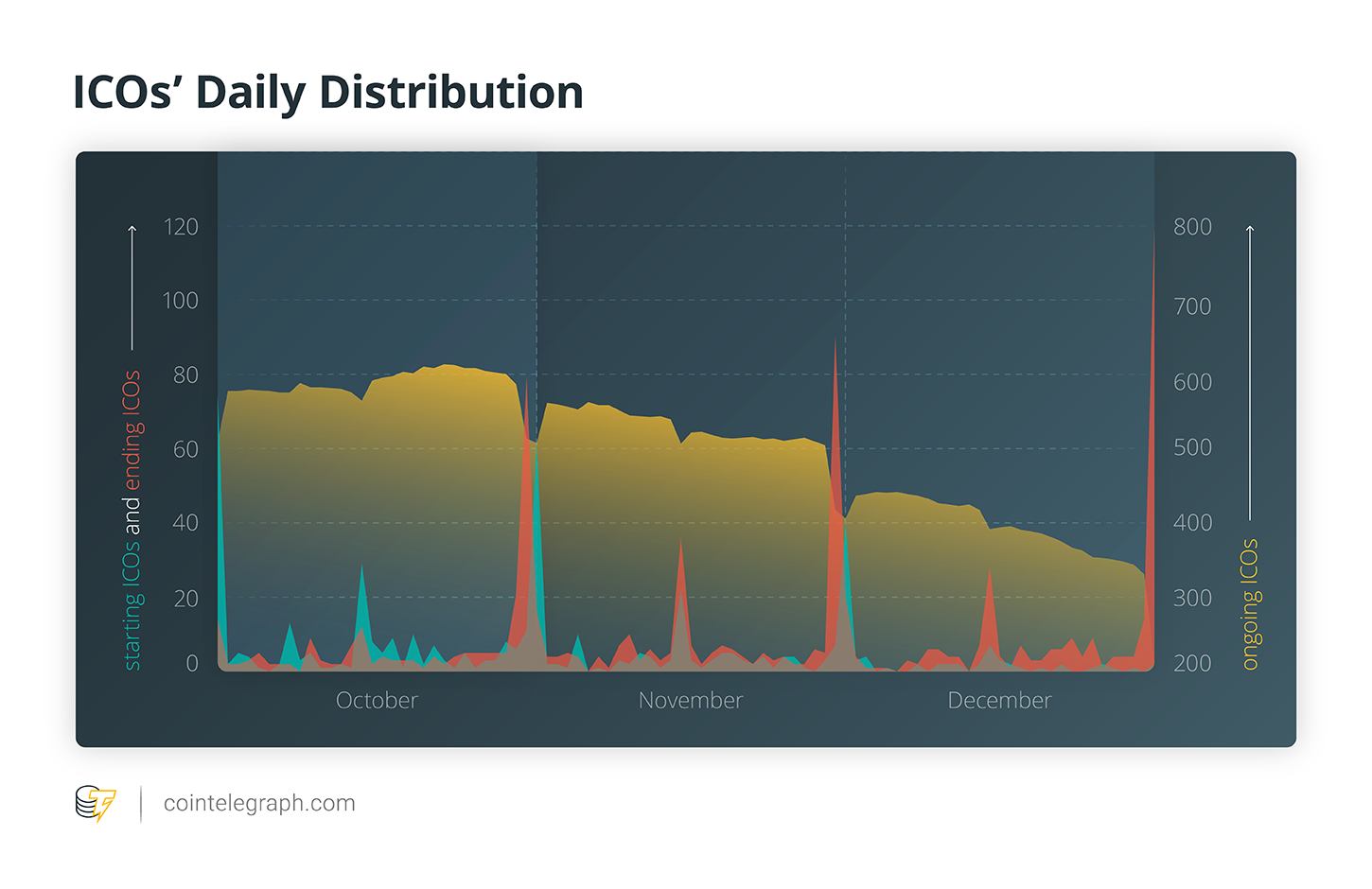 The data presented in the previous chart is, nevertheless, influenced by the time gap that exists from the moment when a token issuing event is scheduled to its actual beginning. This reflects, in fact, the expectation that exists when the ICO is set, and not when it is actually starting. Therefore, October’s data is a result of optimistic market expectations, while the recent more cautious attitude of investors could emerge, eventually, in the composition of ICOs over the next few months.

As a matter of fact, the number of new ICOs listed by ICObench during October (219) is below that of September (274), very far from the record achieved between February and April, and the minimum considering the last 12 months. 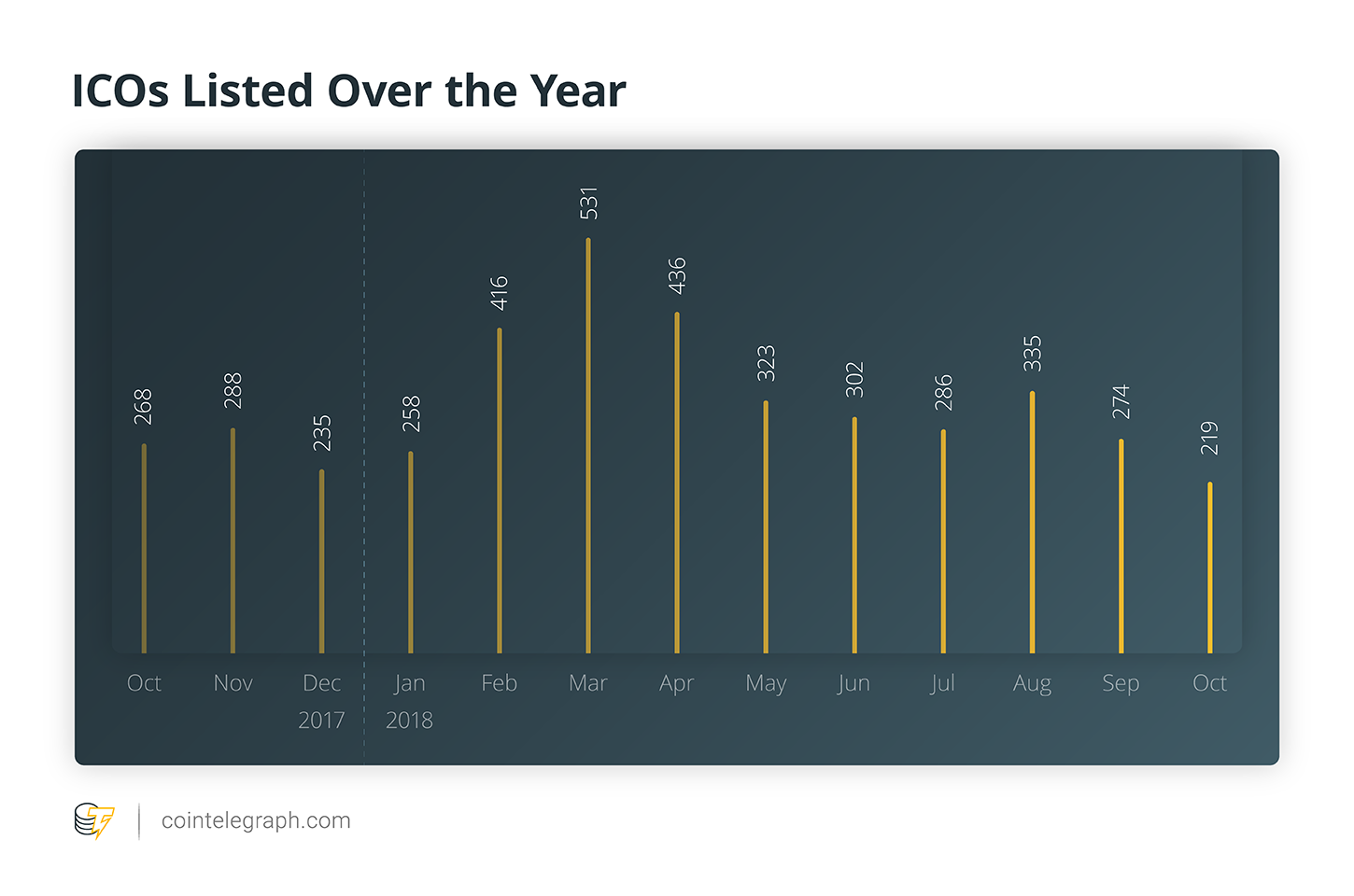 ICOs by size: more different and with better results

A distinctive feature of ICOs is the strong dissimilarity between projects, which makes it difficult to analyze them by considering aggregate and average values. As a matter of fact, measuring the envisaged hard caps (HC) of all the ICOs ending in October, it is possible to detect a slight contraction in their size. Thus, the hard cap average value was about $28 million (compared with almost $38 million for ICOs ending last September), while the largest ICO ending during the month aimed to raise $400 million (compared with $1 billion for September’s largest one).

On the basis of the data published in whitepapers, it is possible to say that the degree of divergence among the HC goals of the ICOs ending in October was lower than that for the same data for September. Considering the ICOs, which are possible to label as “large,” the span between their maximum goals has decreased since September, while the range was greater for the hard caps of the “medium-large” ICOs. 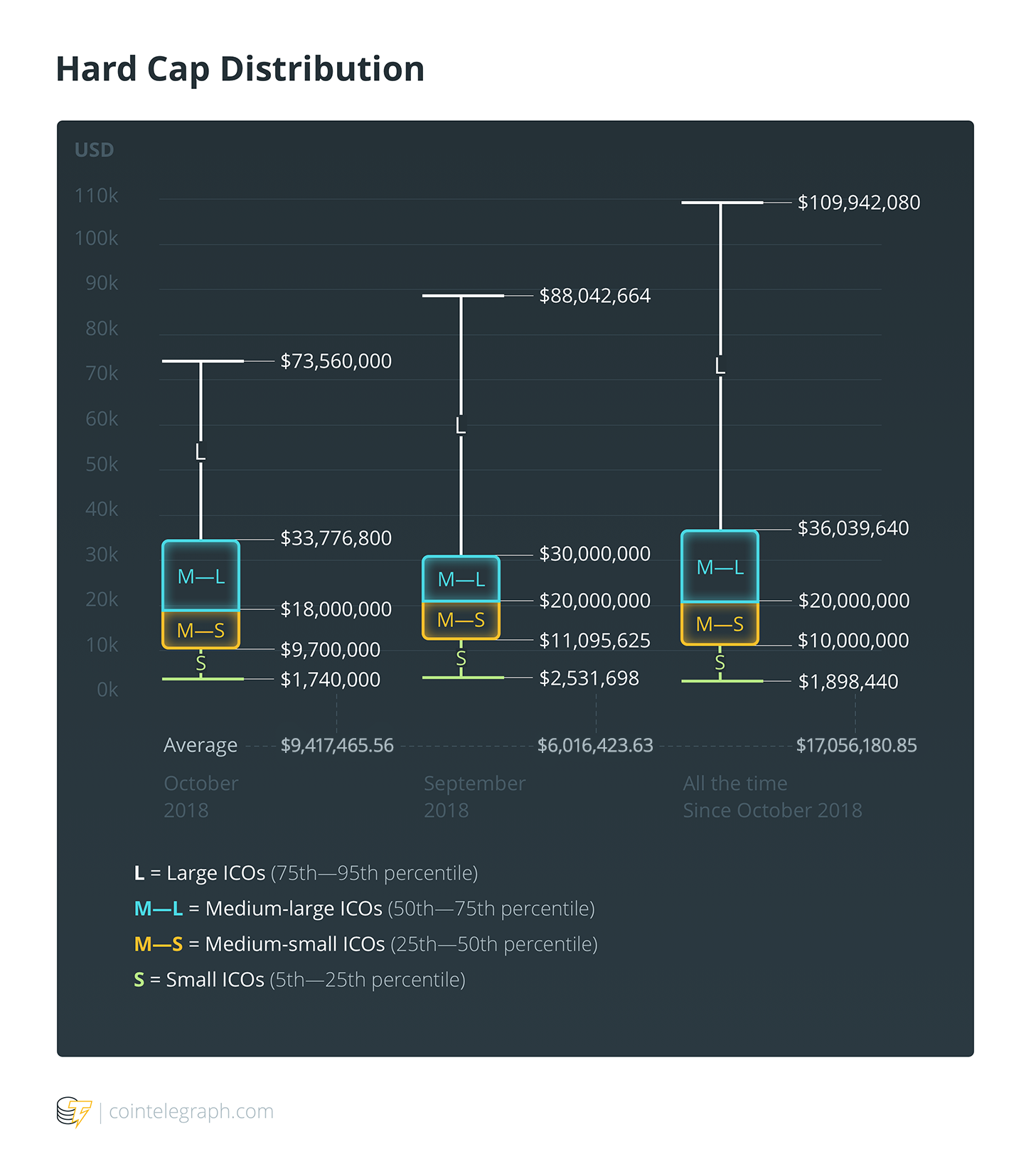 The actual results of the token issuing events ending during the month radically overturn the picture forecasted on the basis of the whitepapers published by ICOs: the average size of the capital gathered rose significantly from September (from $6 million to $9.4 million), with an increasing divergence among the ICOs, greater among the “large” and “medium-large” categories. Besides, the higher result reached by a single ICO during October ($136 million) was far above the best performer of September ($46.6 million).

During October, the highest 5 percent of the sample (considering capitalization) accounted for about 41.9 percent of all the funds gathered by ICOs ending during the month, which was concentrated in just three projects. In September, the top 5 percent (gathered by four ICOs) corresponded with about 29.3 percent of the total raised that month.

ICO by location: a strong leading group and some surprises

October’s data didn’t bring about a relevant change in the ranking of countries with the largest number of ICOs setting up their headquarters there. Singapore, USA, and the United Kingdom (the latter didn’t account for Gibraltar, acting as an overseas territory) are the countries which hosted the most ICOs launched during the last month. Therefore, no variations affected the relative positions of the top 10 countries for number of hosted ICOs since 2015, while, in this general placement, it is possible to notice some movement below the higher rankings, such as the rise of the Czech Republic, from 24th to 23rd position, or Belarus and Georgia, climbing three position each (the first from 46th to 43th, the latter from 49th to 46th). 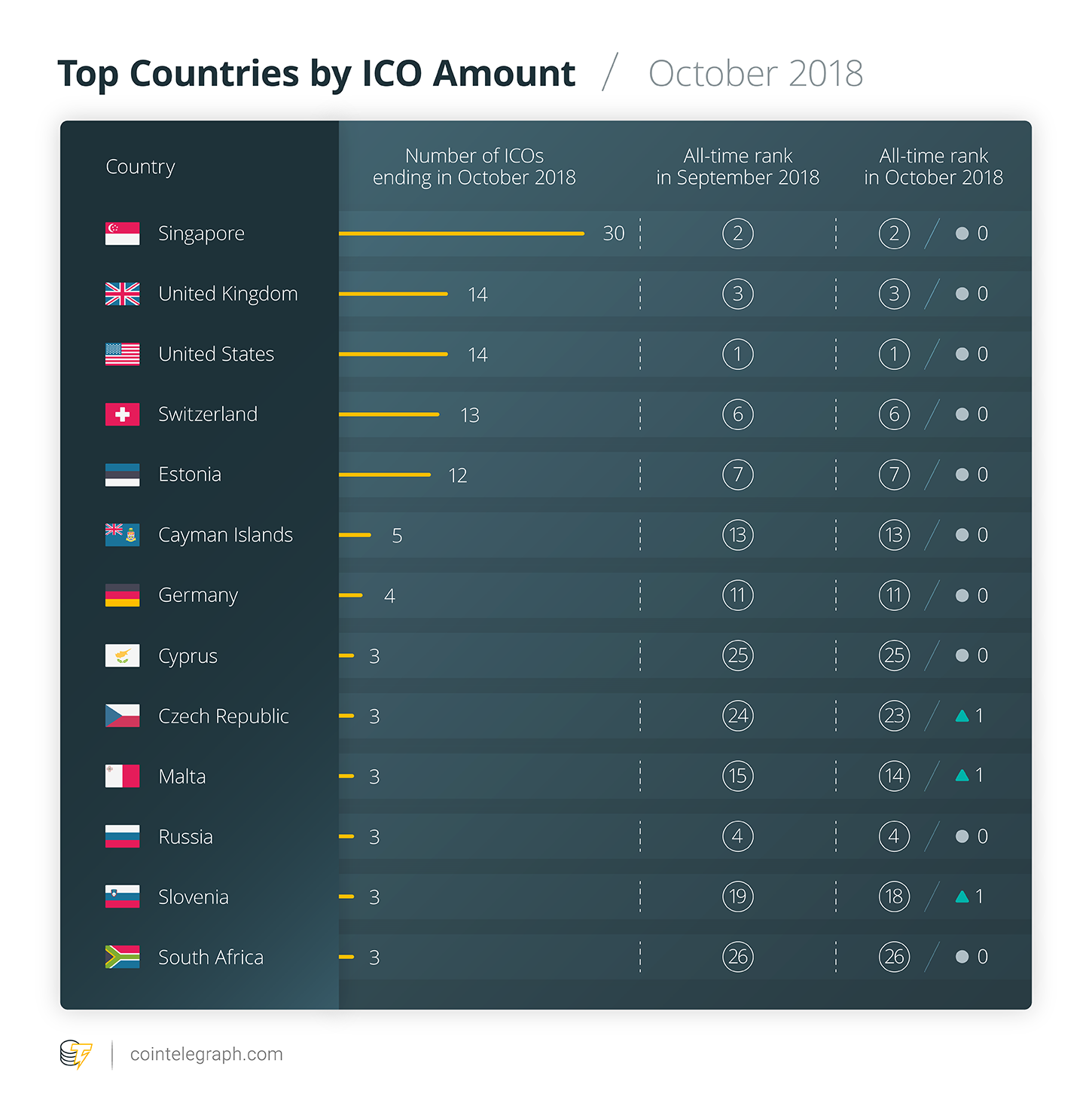 Considering the ranking among countries by economic indicators, the data confirms the stability of a strong leading group: the countries hosting the ICOs which are collecting the most funds in October are the same that occupy the top positions in the rankings for total funds gathered up to September: Singapore, USA, and Switzerland, while the only change among the top 10 in the cumulative ranking since 2015 is the rise of Estonia, from 8th to 7th position (overcoming the British Virgin Islands).

The economic data confirms some of the movements already reported, considering the number of ICOs (for instance, the dynamism of Georgia and the Czech Republic). Moreover, they reveal a new entry, even in the lower part of the rankings: during the month of October, the first ICO hosted by Zimbabwe ended successfully, gathering little more than $8 million (the country is now ranked in 65th position). 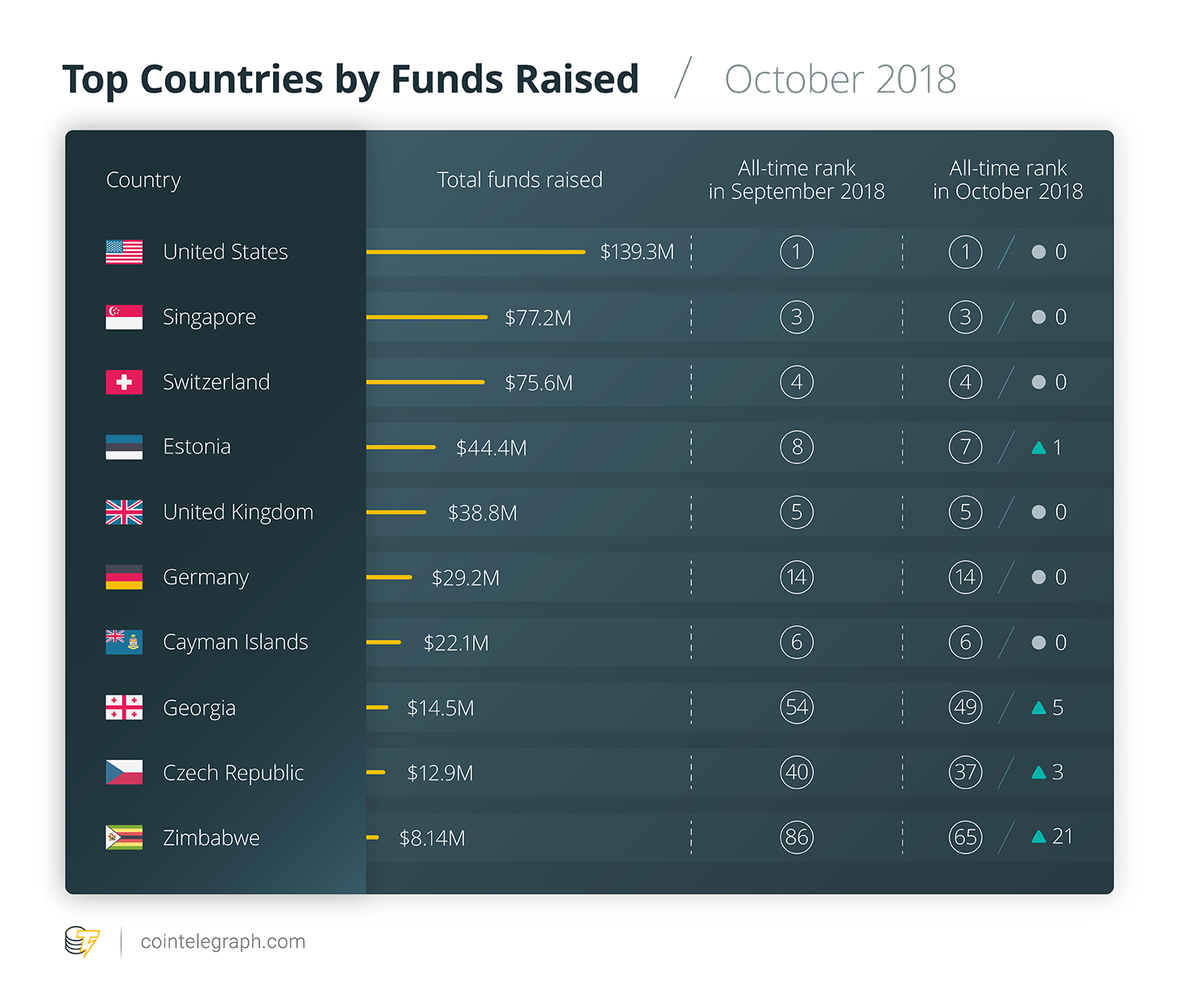 The goals of the ICOs scheduled to end in October remain similar to the previous month: considering the sum of all the hard caps set for the ICOs ending in October, the amount was almost stable in terms of absolute value (a decline of 1 percent compared to September’s data).

Moreover, the ratio of the cumulative HC on the market capitalization of Ethereum at the beginning of the month was higher than September’s, rising from 11.85 percent to 14.18 percent of the Ethers available on the market. This ratio always reflects very optimistic assumptions, but October’s results are closer to the desiderata than the data referring to the previous month: indeed, the funds raised are about 2.36 percent of the average monthly market capitalization of Ether, while the value was about 1.74 percent in September. 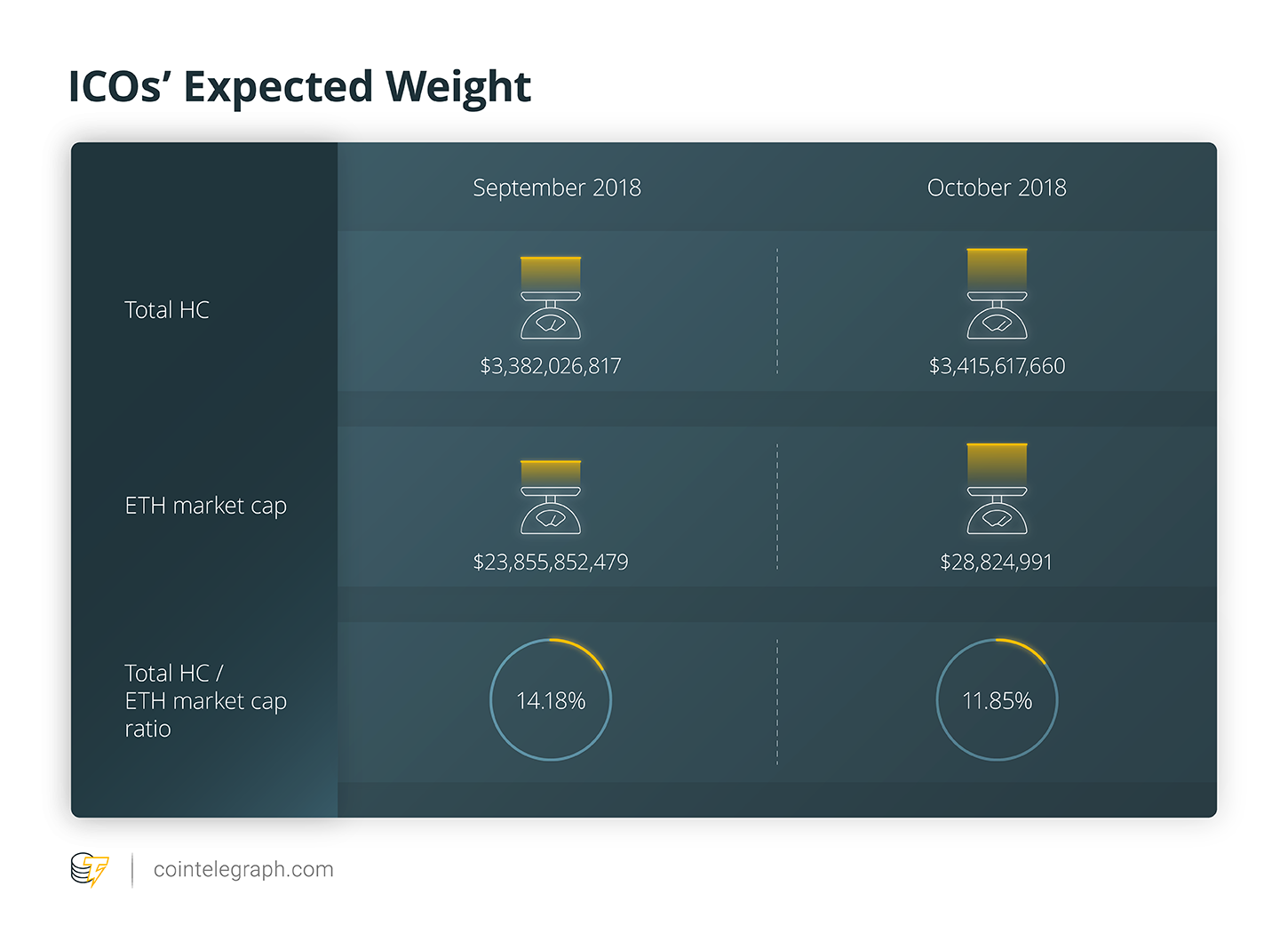 If the envisaged higher threshold was stable, the planned soft caps (SC) grew, from a cumulative value of about $476.7 million for ICOs ending in September, to $524.9 million in October. As a result, the gap between HC and SC is reducing: the cumulative value of the hard caps planned for October was 6.4 times the sum of all the soft caps, whereas the ratio was 7.1 a month ago. The trend could indicate a more attentive evaluation of projects, representing a more prudent minimum level of capitalization.

Considering the final data about the funds raised, the funnel between expected and actual results remain, nevertheless, very tight, as only 10 percent of the envisaged cumulative hard cap was reached during October (the value was 11 percent in September). By the way, if it is true that the number of ICOs collecting at least $1 decreased compared to one month ago, among the “survivors,” the number of ICOs achieving their soft cap (31 versus 26) and their hard cap (two versus one in September) was nevertheless higher.

Analyzing data about October’s ICOs, it is possible to say that the outcome seems very far from the planned target, at least in terms of aggregate values. The market is still applying a harsh selection process, but the general picture seems to show some improvement and the rise of several significant variables, first of all – the total amount offered by the investors. 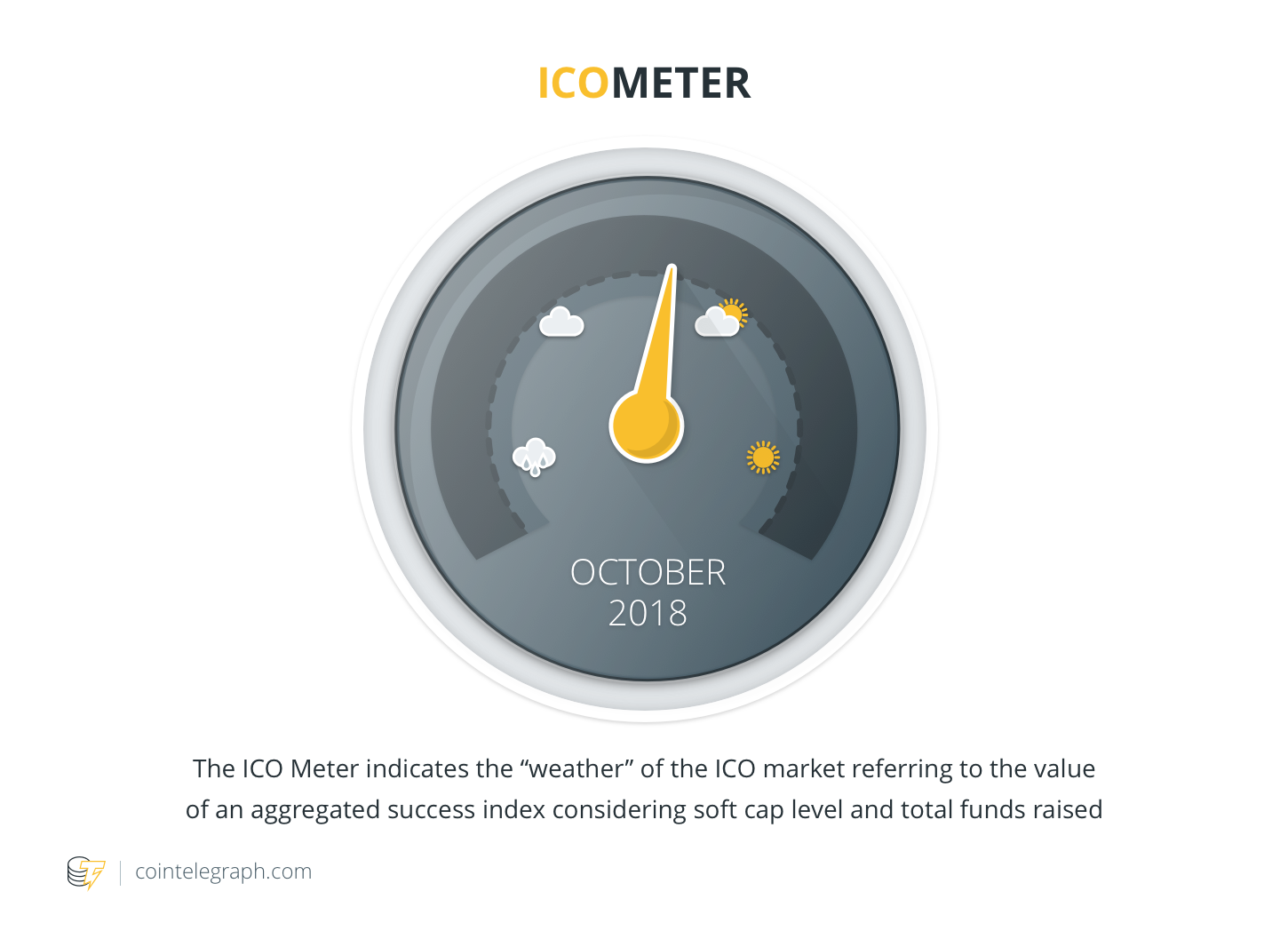