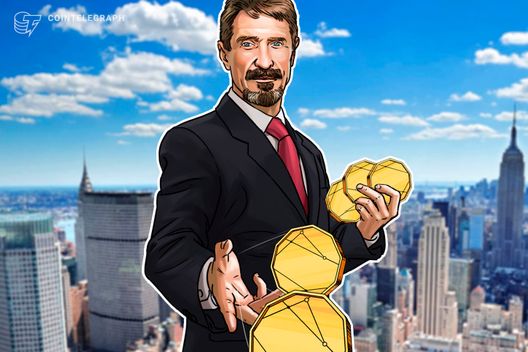 Bitcoin evangelist John McAfee admitted his intention to use his presidential campaign to promote crypto.

Programmer and crypto enthusiast John McAfee revealed his intention to use his 2020 bid for U.S. presidency as a platform to promote permissionless cryptocurrencies in an interview with Cointelegraph Nov. 1.

Speaking with Cointelegraph at the Malta Blockchain Summit today, the founder of McAfee Antivirus Software said he plans to run “around a libertarian platform,” and use his access to the national stage solely to discuss cryptocurrencies, while expressing сonfidence that “no one will elect [him] as president.”

McAfee commented that his pro-crypto stance is mainly based on the concept of “personal freedom,” stating that in his coming bid for presidency he wants “to talk about personal freedom and how cryptocurrency can help us achieve that.”

McAfee elaborated that his intention to run to presidency was not to win, but rather to gain a large public platform for promoting decentralized cryptocurrencies, stating:

“That’s [crypto] all I’m going to talk about. See, I don’t want to be president. I couldn’t be…no one’s going to elect me president, please God. However, I’ve got the right to run.”

McAfee first announced his intention to run for U.S. president in 2020 in order to support the crypto community and promote crypto in early June, 2018.

In the interview today, McAfee also reiterated his prediction from last-year that top cryptocurrency Bitcoin (BTC) will hit $1 million by the year of the U.S. president elections. However, McAfee clarified that that amount of U.S. dollars will not be the same $1 million that we have today, since fiat currencies will logically flee to crypto markets, adding confidently:

“In five years time fiat will be on its last legs.”

The upcoming U.S. presidential run will be not the first one for McAfee ,who sought the Libertarian Party nomination in 2016. McAfee has since claimed that if he “been more connected with the community in 2016,” he would even have better promoted the idea of “currency independence.”

As he said in the interview today, back in his 2016 run, he focused on “lapses in cyber security.”

In June 2018, McAfee announced on Twitter that he would stop  promoting Initial Coin Offerings (ICOs) due to “threats” from the U.S. Securities and Exchange Commission (SEC). Previously, the businessman had admitted to charging over $100,000 per tweet to promote cryptocurrency projects and products.