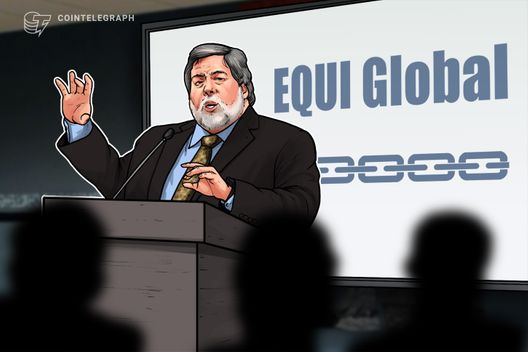 Apple’s Wozniak has been announced as the co-founder of blockchain-focused venture capital fund EQUI Global.

Following an announcement about his plans to become “involved” in a blockchain project earlier in August, Wozniak has been revealed today as a co-founder of EQUI Global, a venture capital fund focusing on blockchain technology and built on a blockchain-powered backend.

The new venture capital fund aims to change the concept of the traditional industry by enabling non-institutional investments, as well as allowing investors to trade on external crypto exchanges via EquiTokens. The EquiTokens infrastructure is reportedly based on the Ethereum (ETH) blockchain, which is widely used by decentralized applications (DApps) developers.

According to Verdict, EQUI Global will target “sophisticated” investors that are focused on venture capital funds through investing in EquiToken. The model intends to facilitate the trading experience by allowing for the easy liquidation of tokens through cryptocurrency exchanges. The report further notes that 80 percent of EQUI Global’s investments will be put in technology companies, while the rest will be invested in other fields like real estate and art.

As Wozniak stated, the company’s mission is to “seek, support and fund the blockchain and tech stars of tomorrow.” Wozniak noted that the company has already partnered with “over 20 businesses” that have not been launched officially.

Wozniak also emphasized that his participation in EQUI Global is “about the second time in twenty years” when he has agreed to be involved in a project, while he has been receiving “dozens” business offers and ideas “every single day.”

According to EQUI Global’s website, the company was set up “nearly a year ago” from press time, while the idea of EQUI’s model has changed since the initial launch. Originally, the founders were considering launching the company as an Initial Coin Offering (ICO) that used the EquiToken as a means to raise capital on a project-by-project basis.

By co-founding a firm supports blockchain and crypto technology, Wozniak has appeared to change his sceptical stance to the field, following his recent statement that blockchain is a “bubble” similar to that of dotcom era, as he claimed in June 2018. However, earlier in June, Wozniak also spoke positively about Bitcoin (BTC), arguing that “only Bitcoin is pure digital gold.”