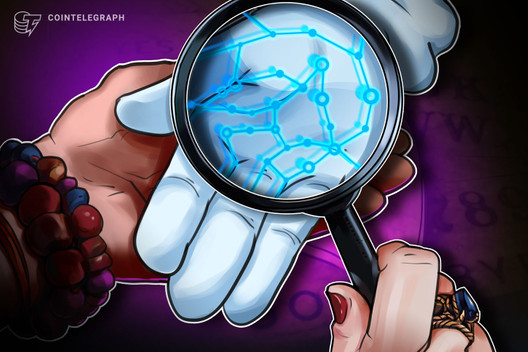 The analysis of Bitcoin transactions, addresses, UTXOs and some other key metrics allows us to predict an upcoming exciting future, at least for a couple of years.

Bitcoin (BTC) has been the most interesting asset over the last decade and on-chain analytics can prove such a statement. Since its inception, and until the first quarter of 2020, Bitcoin has increased over 1,000,000% in value, climbing from $0.05 to around $10,000. However, it is also true that Bitcoin, or any other cryptocurrency for that matter, has ever faced a great recession or depression during its brief history. At least, it has not faced one in its entirety, since Bitcoin was born in 2009 in the middle of the financial crisis.

Today, we aim to explore some key metrics that translate into adoption. Our goal is not to focus on technical analysis per se, but to look into on-chain metrics and see how they can impact the current and future price of BTC.

Related: The Biggest Rises and Falls of Bitcoin, Explained

I hope you’re as excited to find out what drives Bitcoin prices as I am eager to tell you. Ready to dive deep into Bitcoin’s future during the new roaring 2020s?

First off, let me define what we mean by “on-chain analytics.” Instead of focusing on price and traditional technical analysis techniques, we’ll look into all data that is natively stored on the blockchain.

This data includes (but is not limited to):

In other words, the on-chain transaction volume is being used to judge whether a crypto asset is actually being used, and when and how that impacts its price and value.

Instead of just crudely measuring the overall usage of a cryptocurrency network, I think we may use on-chain transaction data to figure out who is using Bitcoin, how they are using the network, and when certain metrics point to either bullish or bearish seasons.

In sum, our objective is to translate key blockchain metrics into price appreciation metrics so that we can use them to predict important price movements.

What metrics are we looking into?

A great starting point is all the variables directly linked to the blockchain. Initially, we are looking into the four most basic, yet crucial, on-chain metrics available:

There are plenty of other metrics we’ll put together in the future, as we would like to perform a comprehensive analysis of three distinct groups: transaction data, exchange and market data, and mining and fees data.

The very first on-chain data points we’ll be analyzing relate to transaction data. Our core focus will be transaction count and volume, and how these metrics relate to Bitcoin price appreciation. 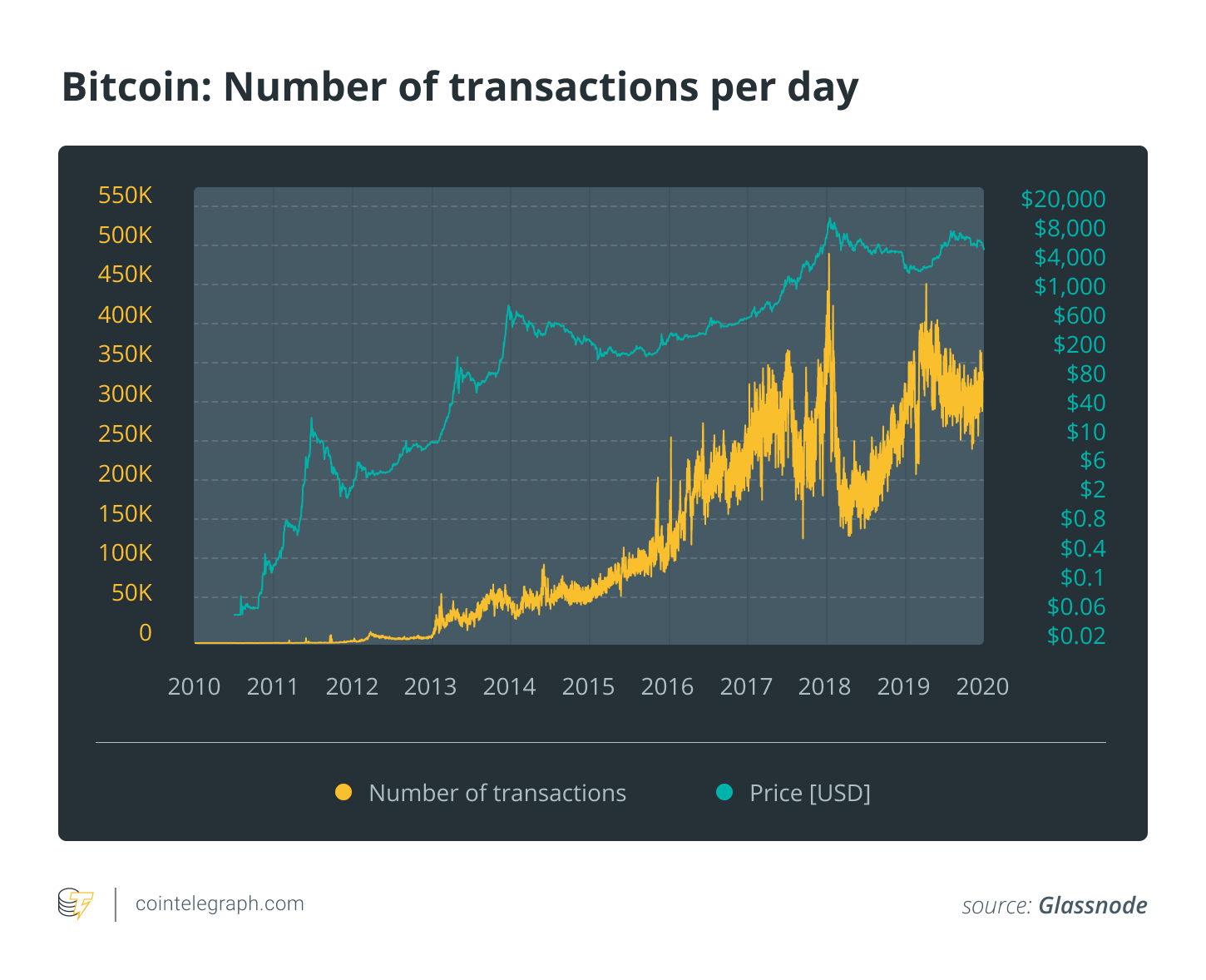 Looking at the chart above showcasing the number of transactions per day from 2010 to February 2020, we can quickly see the trend is quite positive. Some important takeaways are:

To prove our point, let’s take a look at the total Bitcoin transfer volume. 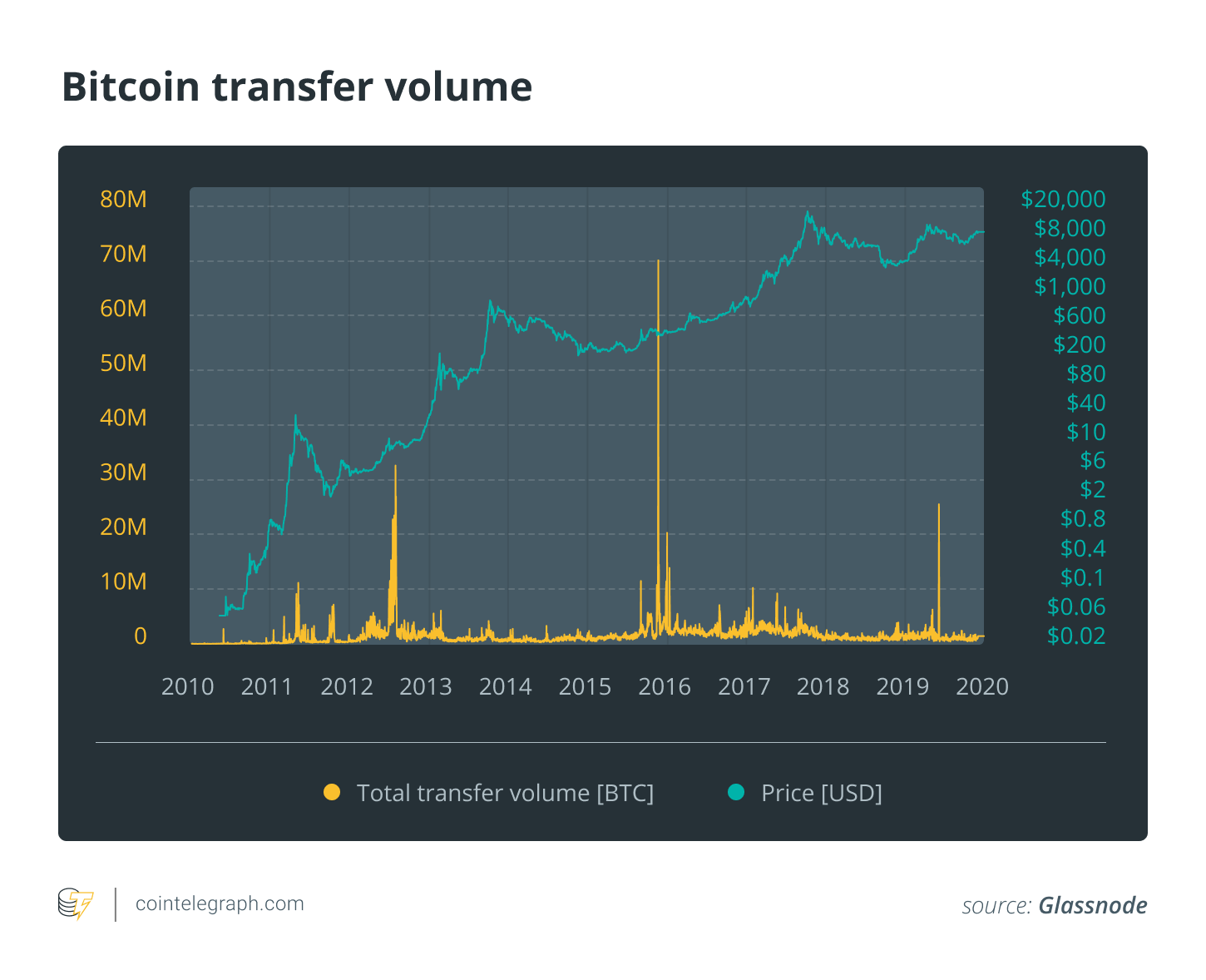 What we notice is the following: As price increases, total volume increases as well. However, since less Bitcoin is needed to achieve the same dollar equivalence, we could expect either fewer transactions with increased value or additional transactions with less value.

Hence, in terms of transaction data, what we conclude is that while the total number of Bitcoin transactions has been steadily increasing, volume seems to be much more volatile, meaning the current price of Bitcoin is a speculative one.

Bitcoin addresses show the behavior of BTC holders. The main data we’ll be looking into is the number of active addresses and how much each one holds. Such metrics may help us understand how people behave during bullish and bearish seasons. 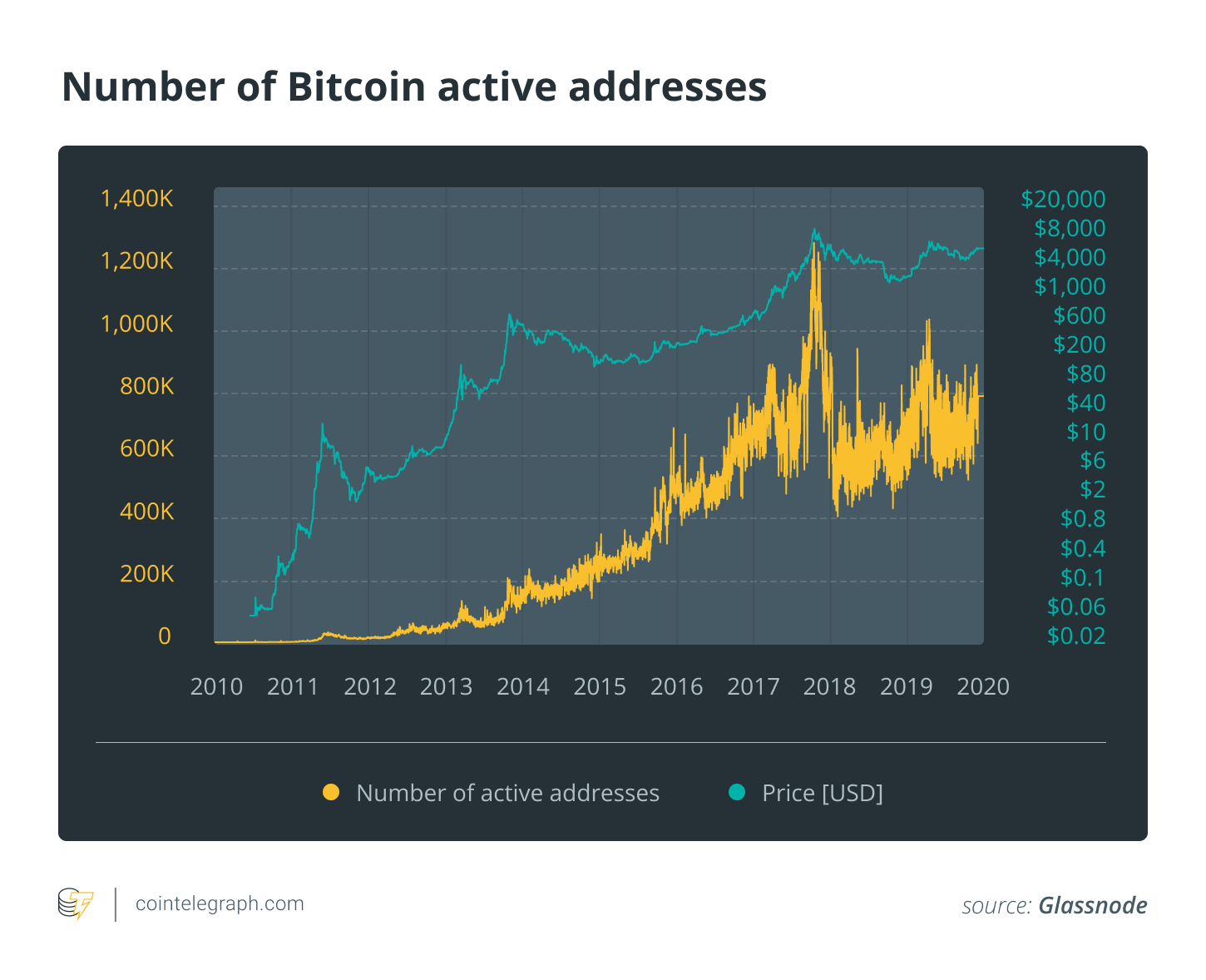 This suggests that long-term users of the cryptocurrency care little about price swings.

Additionally, let’s compare the above to the number of total addresses. How do you think it has been growing in terms of non-zero balance addresses? 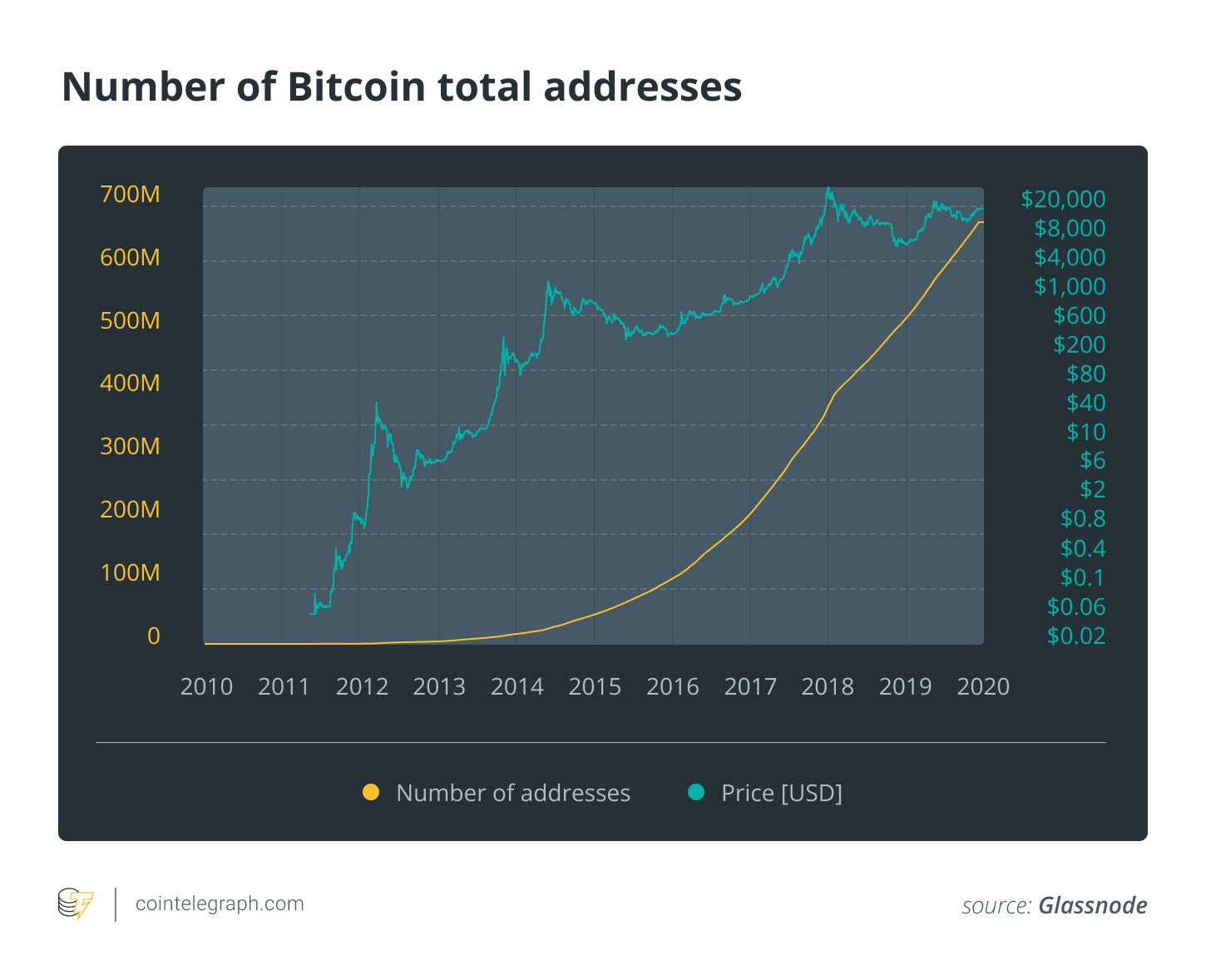 If you answered “exponentially,” you would be correct.

If this trend line reminds you of the Coronavirus, also known as COVID-19, infection rate, that’s because it’s quite similar. Every year, the total number of addresses is almost doubling.

Even though this metric cannot be linked to the number of active users, it clearly shows how much the network is being used. 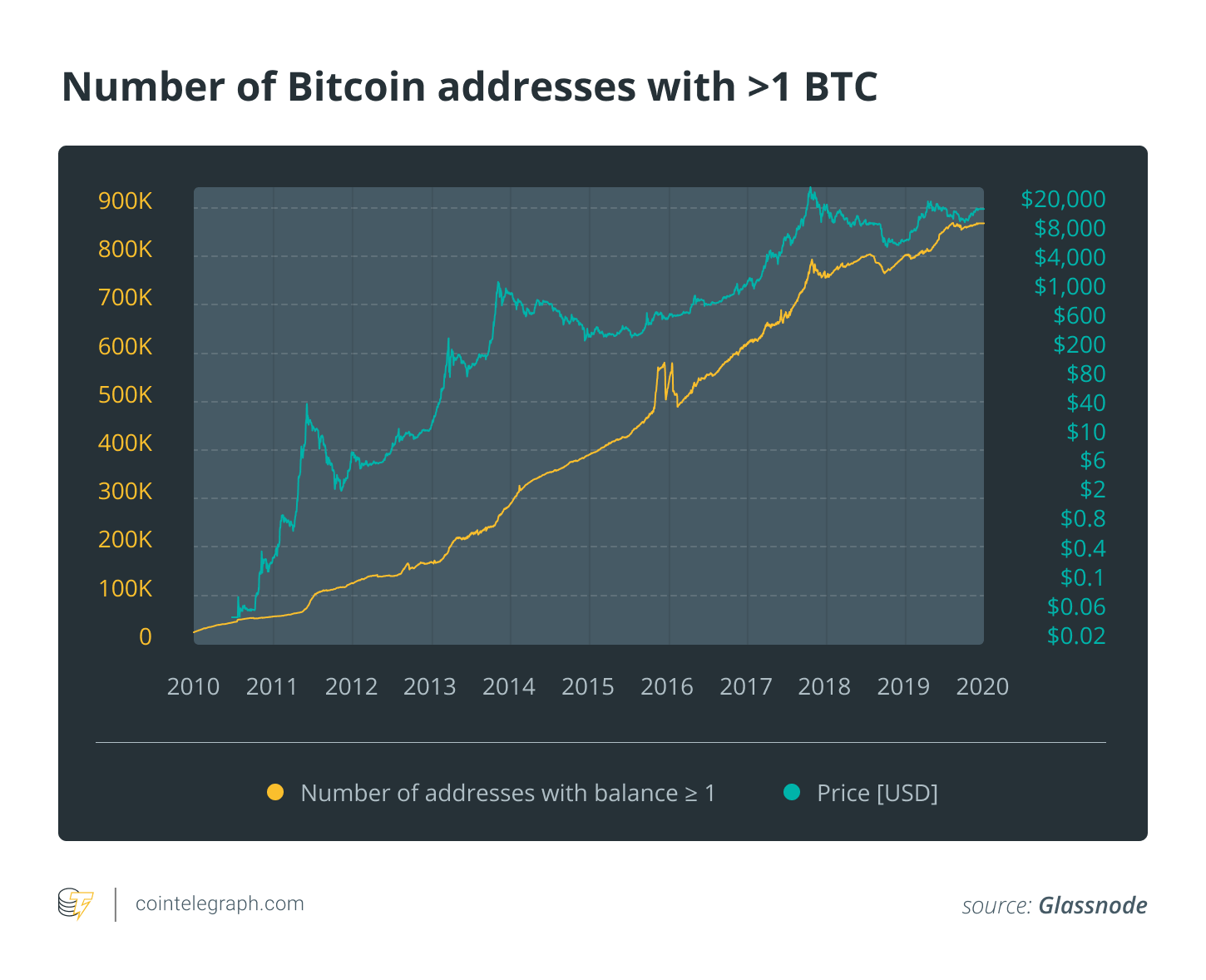 What about the number of institutional investors? Do you think they have been interested in buying or selling Bitcoin? Let’s take a look. 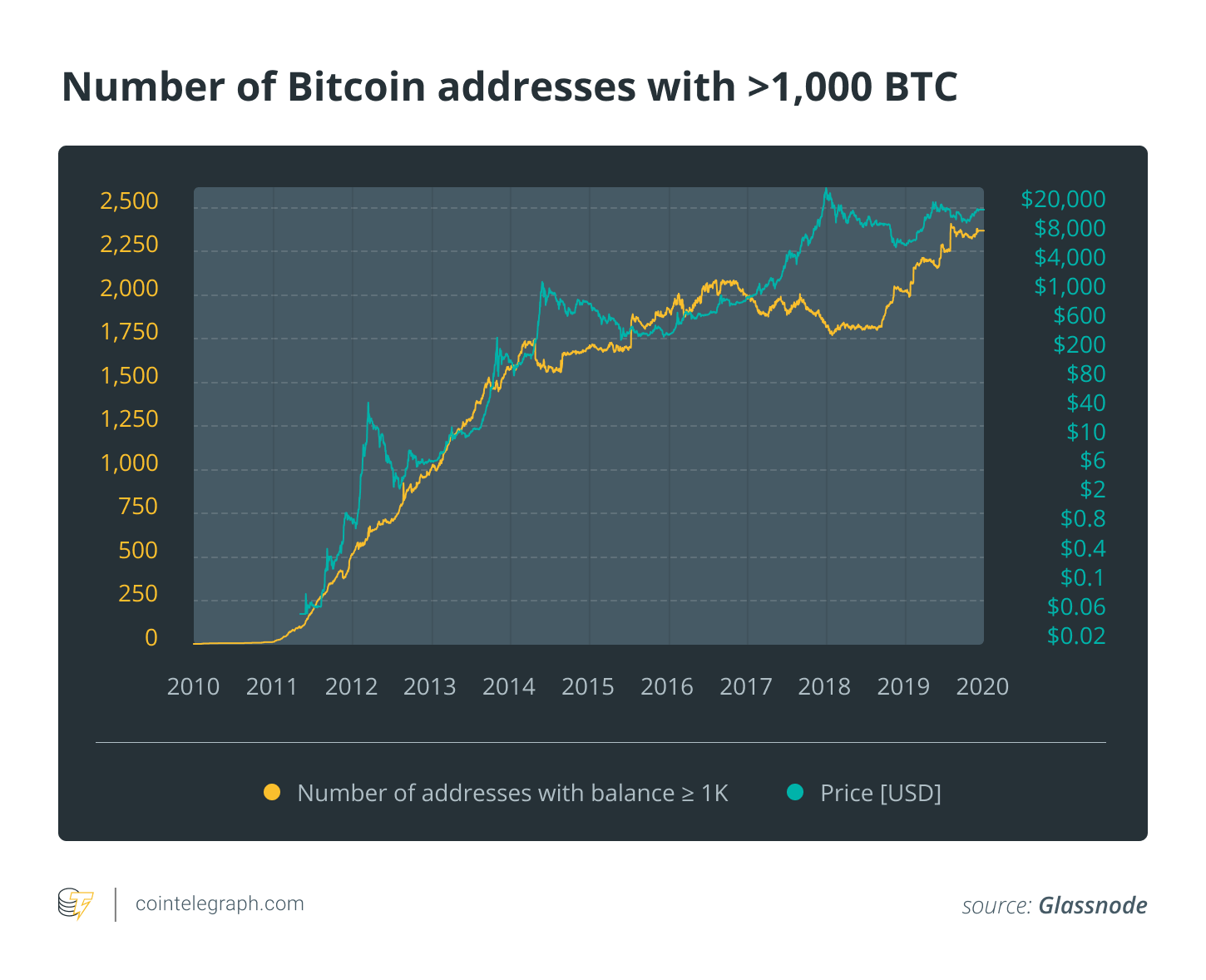 The chart above showcases the number of addresses holding over 1,000 Bitcoin. We can clearly see that even though there was a sell-off during 2017 and 2018, institutions have still been buying afterward. Heavily.

There are not likely many people with the capability to have purchased such an incredible amount of Bitcoin since 2019. Hence, probabilistically, such addresses are likely associated with institutions.

Do you personally think whales represent smart or dumb money, generally speaking? If you answered “smart money,” then you already have a strategy laid out: Follow it.

To conclude this section, I’ve shown how total addresses are not only growing in number, but also in value: The number of holders with over one Bitcoin is almost doubling every year, and the amount of institutions holding over 1,000 Bitcoin has increased by over 50% since 2019.

Data for unspent transaction output, or UTXO, is one of the most interesting sources of information to look into, at least in our opinion. For starters, it helps us understand the long-term behavior of Bitcoin holders, which comes in handy as our goal is to predict when to buy and when to sell.

UTXO shows the addresses that have received BTC and not spend it afterwards. 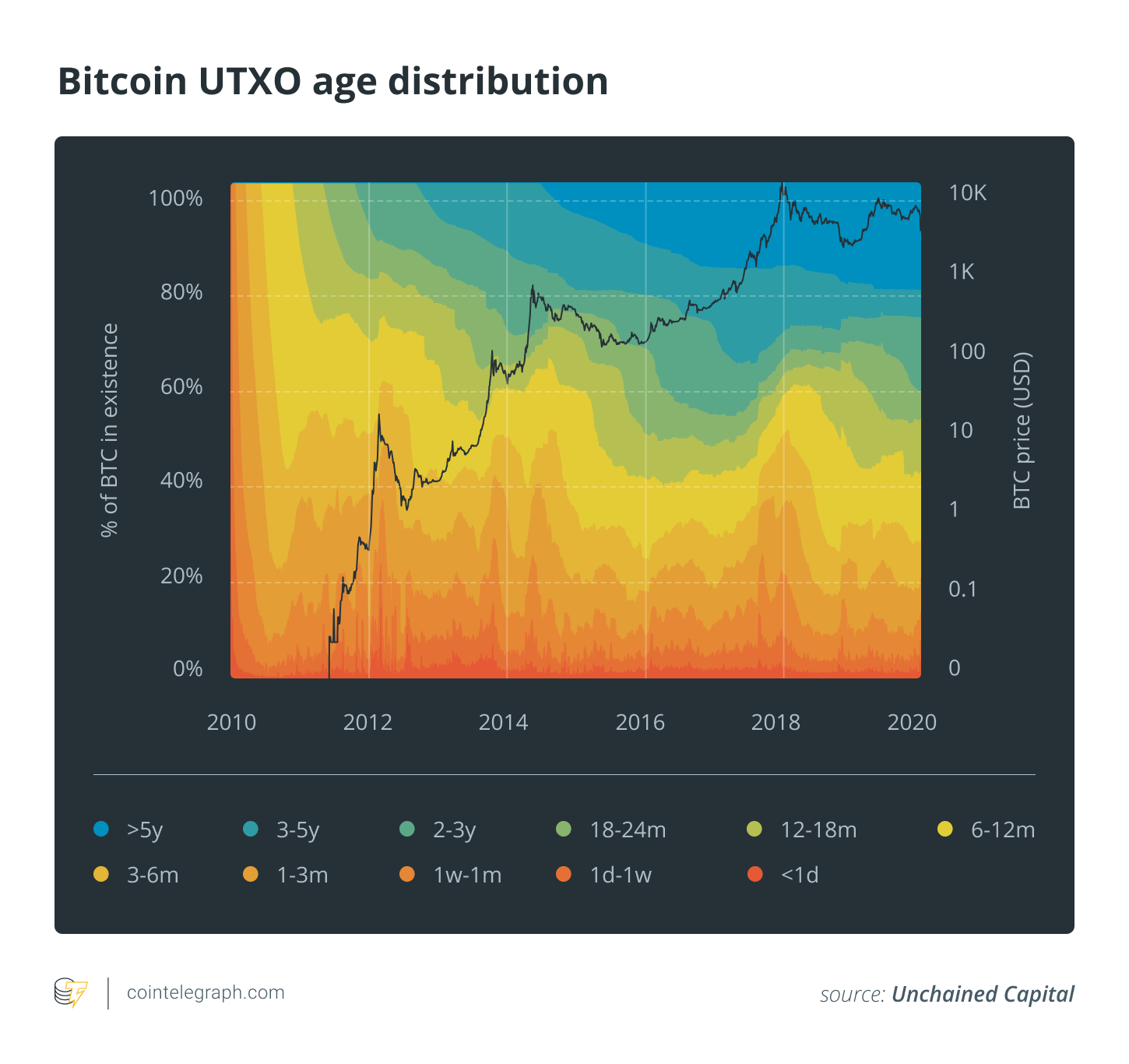 For reading the graph above, allow me to use Unchained Capital’s own definition:

The chart’s main points of interest seem to be the following:

Hence, what we can expect is that smart money will accumulate during bear markets and sell during bullish seasons. Much like what I concluded in the previous point when looking into the number of addresses holding over 1,000 BTC.

Before we conclude this piece, we would like to take one last dive into the Bitcoin blockchain data. This time, we’ll look at blocks.

We believe the starting point should be block weight. How much data does each block hold, on average? To answer such a question, we’ll turn to our pals over at Bitinfocharts, one of the best repositories for blockchain charts. 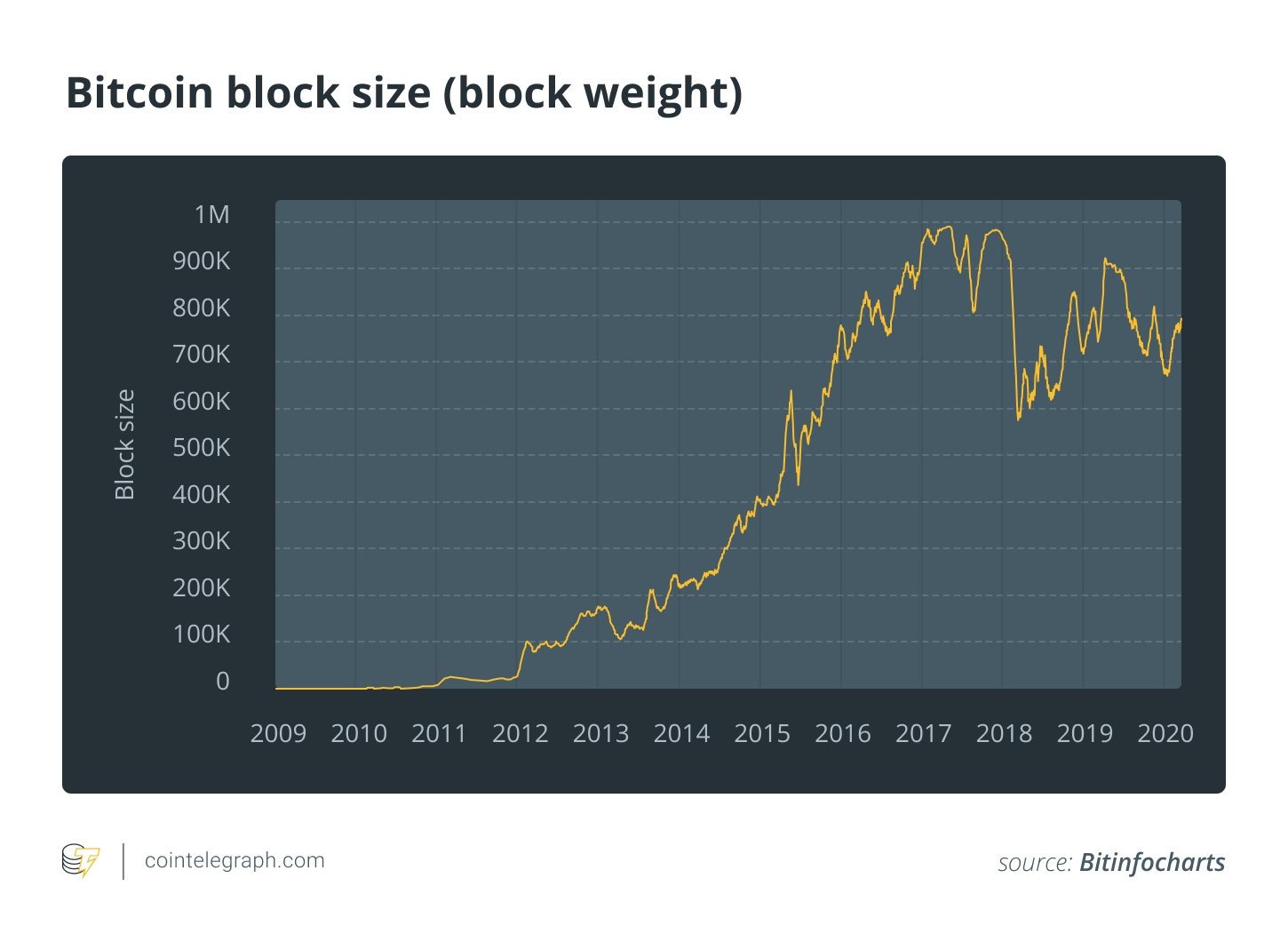 At 1.2 megabytes, Bitcoin’s block weight, or the number of bytes of each block in the Bitcoin blockchain, is currently reaching its maximum.

Block size peaked during late 2017 and early 2018, before many exchanges and other key players adopted Segregated Witness, or SegWit, shown below. The data shows an increasing adoption of SegWit, which removes the signature data from the block header, freeing up space for additional transactions.

The really interesting thing we noticed from observing this data is that it seems to correlate with the graph above. 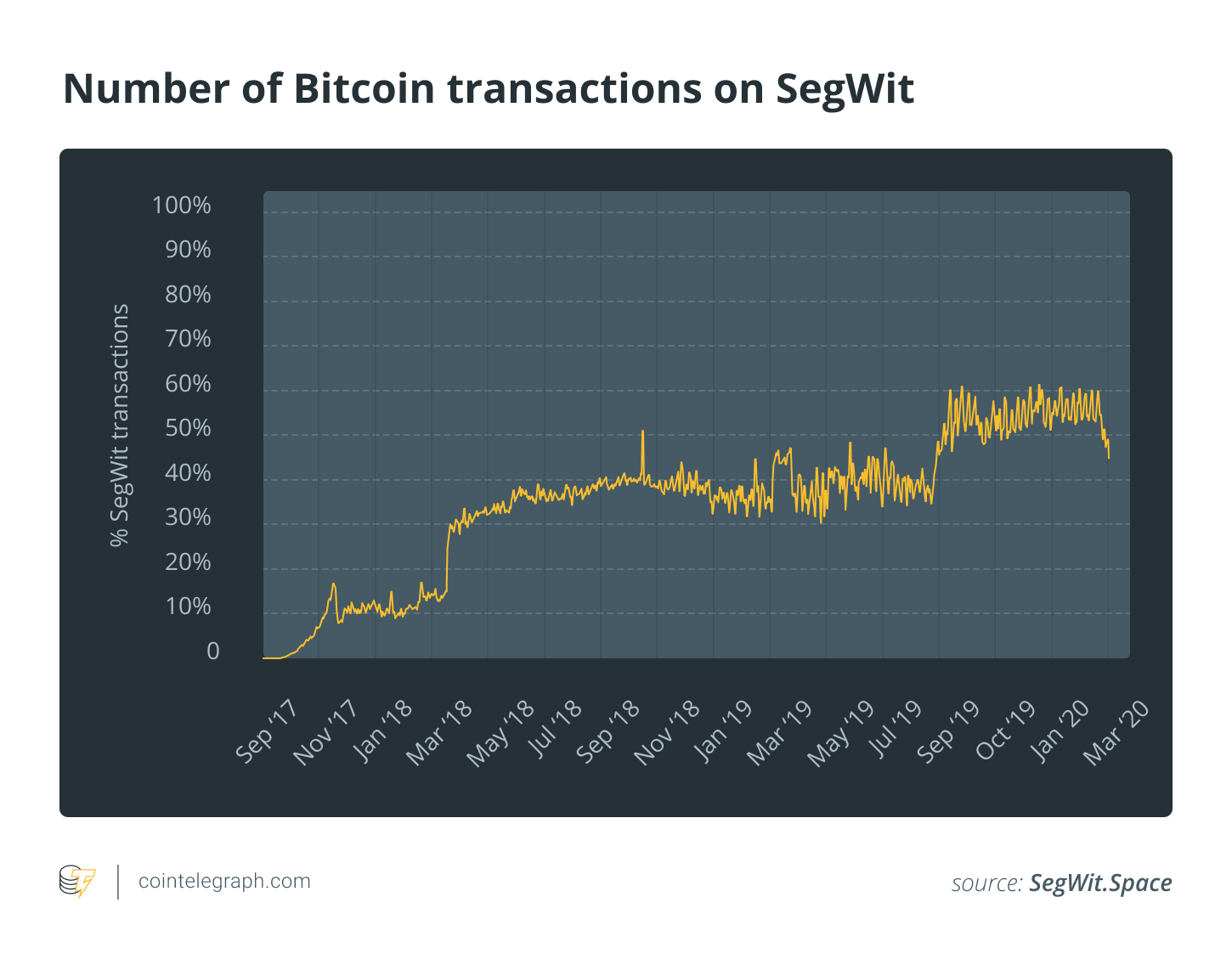 Starting in October 2017, SegWit started getting adopted. Today, over 50% of all players use SegWit addresses. At the same time, block size started dropping in late 2017.

Hence, it seems Bitcoin is further developing key improvements to its working mechanics, allowing for more transactions per block. Such improvements may accommodate more users, which may help with furthering adoption.

Lastly, let’s take a look at the block height, which adds the previous blocks. 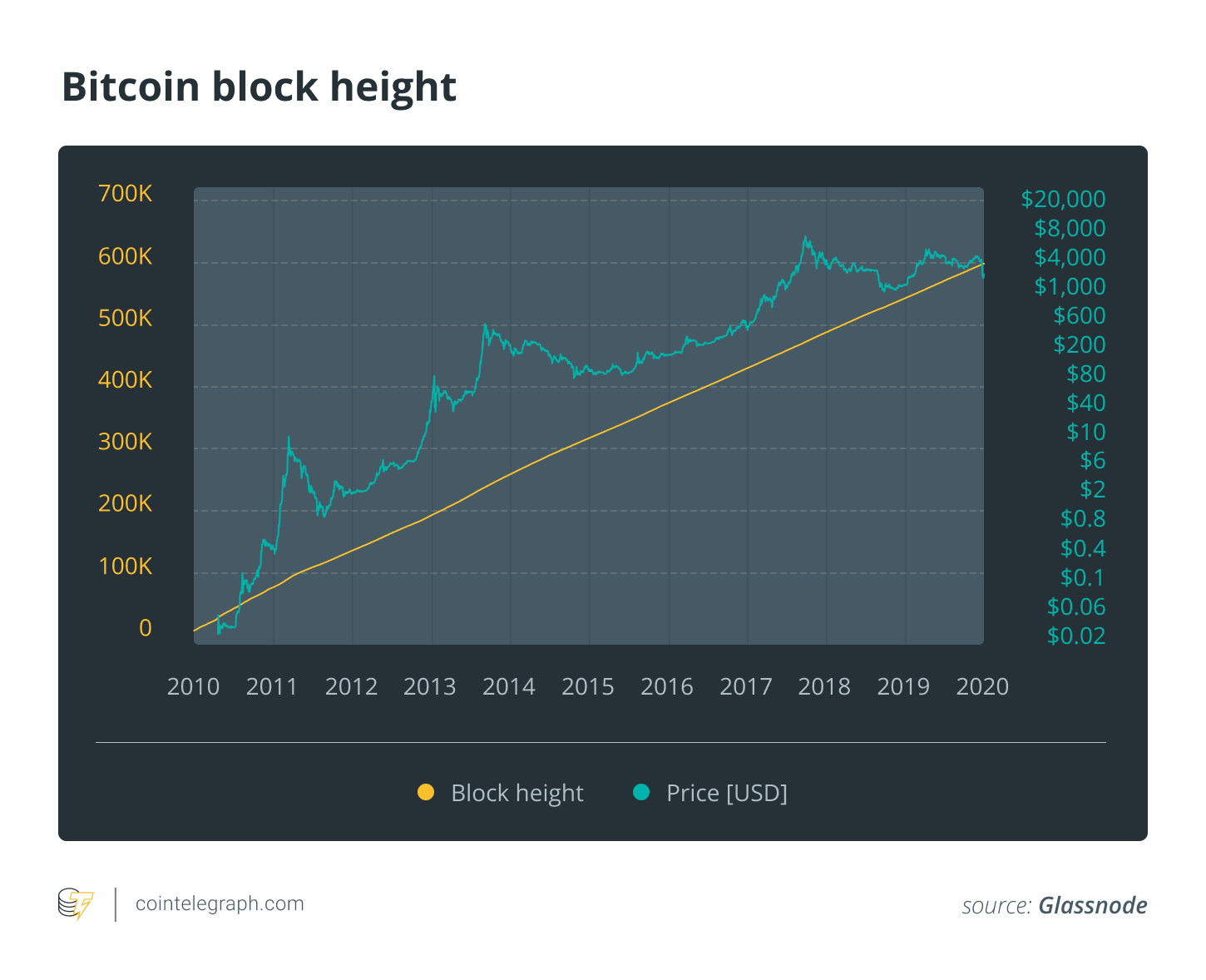 What this data shows is that not only has the Bitcoin blockchain been working nonstop for the past ten years, but over 600,000 blocks have been created.

If history rhymes, we could potentially see Bitcoin making way for brand new highs during late 2021, early 2024 and late 2027.

Looking at some key metrics relating to Bitcoin transactions, addresses, UTXO and blocks, we conclude that we’re in for an exciting couple of years.

Arguably, the latest price drop that took Bitcoin below $5,000 on CoinMarketCap provided our last opportunity to purchase BTC below $10,000. Especially since the halving is almost coming. Hence, let me summarize this article’s findings:

This article does not contain investment advice or recommendations. Every investment and trading move involves risk, you should conduct your own research when making a decision.

Pedro Febrero is the founder of Bityond, a recruitment portal with a decentralized governance model, and an analyst for Quantum Economics. He has penned over 600 articles in the cryptocurrency space and been involved with blockchain technology since 2016.