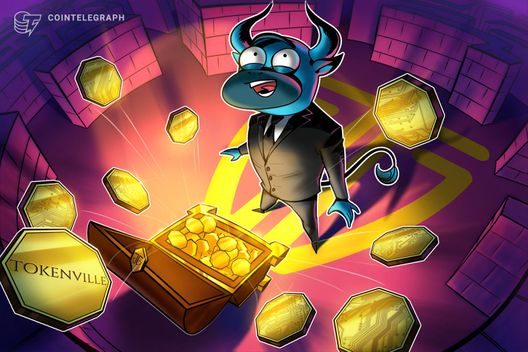 A company is creating a comic book universe for crypto with a view to educating readers, entertaining them, and establishing a new raft of collectibles.

Move over DC and Marvel: a fledgling company wants to create a comic book universe where crypto and blockchain are at its center – building an immersive experience for readers with a whole new suite of coveted collectibles.

Tokenville says comics offer an exciting format for entertaining crypto enthusiasts, not to mention enlightening those who are new to the community. It also believes that non-fungible tokens and decentralized apps (DApps) mean this medium can become more interactive than ever before – meaning everything from comic book characters to strips (and even the front covers of issues) can become tokenized.

The business is close to releasing its first effort in infusing comics with blockchain – known as The Crypto Treasures. Designed by the renowned comic book author Vitaly Terletsky, the storyline centers on the so-called “Myths of Crypto.” Set in ancient times, it explores the clashes between Good and Evil as they both pursue a mythical beast known as “Mass Adoption.”

Tokenville’s argument is that, when you think about it, the crypto world has established its own mythology over the past 10 years of existence. The team said: “There is an own genesis with Satoshi as a creator, stories of rise and fall, friendship and betrayal and own heroes and villains contending for a MacGuffin of mass adoption.”

It says that The Crypto Treasures will stand out from other comic books for two main reasons. Firstly, readers will be able to purchase mystic artifacts in the form of non-fungible ERC-721 tokens – and trade them through a marketplace. Collecting special artifacts will also give them the chance to win a jackpot. In order to access the comic, readers pay for a subscription using non-fungible tokens too.

Further titles are already in the works. Tokenville has teamed up with CryptoKitties to develop a new show known as Crypto Detective, as the collectibles brand attempts to expand its so-called “KittyVerse.” The stars of this particular title will include genuine CryptoKitties submitted by their owners for participation.

A bridge from crypto to pop culture

Tokenville says the crypto community has always been closely tied with geek culture – and many industry leaders have long had an affinity for comic art.

The company acknowledges there have been several projects in the past which have sought to inject the crypto universe into comics. They have included Bitcoin: The Hunt For Satoshi Nakamoto – a graphic novel which officially became the very first comic book about Bitcoin. Available in regular bookstores after a successful crowdfunding campaign, the title capitalizes on the mystery surrounding Nakamoto – resulting in a dramatic tale where he is admired and idolized by the public but pursued by the mafia and the National Security Agency.

Crypto-driven comic books have also been able to achieve a different purpose: satire.

A good example has been found on Reddit, where Cryptos decided to create strips which feature digital currencies as the characters – gaining hundreds of thousands of fans in the process. In one example, Bitcoin tries to buy a coffee, only to find out that it will cost $31: $3 for the drink and $28 in transaction fees. Although they reluctantly pay, they then need to wait for the payment to go through – and the scene gradually changes from day to night before they receive the coffee, poking fun at the rather slow transaction times this cryptocurrency has faced.

The TV Token, which fuels the Tokenville ecosystem and provides access to comics for users, is available on the HitBTC exchange.