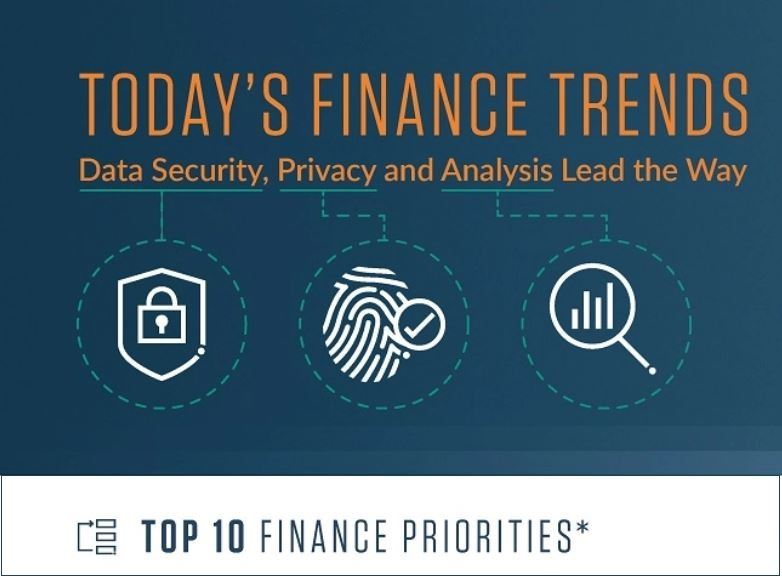 Enhanced data security and analytics are at the top of chief financial officers’ priority lists among both private and public companies, according to new data from auditing and advisory service provider Protiviti. The firm’s latest research examined CFOs and other financial executives’ views on the future of their functions and processes.

Chris Wright, Protiviti’s global leader of business performance improvement solution, recently spoke with PYMNTS to reflect on the survey, which is indicative of the organization’s ever-growing adoption of technologies that amplify the importance of data on their operations. The results are not surprising, he said. What is surprising is that Protiviti’s research concluded CFOs are not prioritizing some of the technologies they could use to achieve their goals in data analytics and security. In fact, the report found, some of these technologies are actually ranked lowest on CFOs’ priority lists.

According to the report, “The Shifting Landscape of Finance,” data is at the heart of the chief financial officer’s role. Specifically, the privacy and security of data stored within their corporate finance applications was listed as their top priority, and 75 percent of CFOs surveyed rated their prioritization of this goal of at least eight (on a scale of one to 10, 10 being the highest priority). Protiviti researchers noted that this finding “comes as no surprise, given the volume, complexity and sensitivity of data that finance groups must manage and secure.”

“Based on our interaction with clients and non-clients in the C-Suite in finance organizations over the past year or two, the idea that data is top-of-mind was to be expected because of the impact it has across the spectrum of CFO, controller and chief accounting officer responsibilities,” Wright said, adding that those responsibilities now include proactive efforts to safeguard and strengthen the enterprise — not simply the retroactive reporting of financial processes that have already occurred.

Broader use of the cloud means easier access to data, and researchers noted that CFOs are struggling to access complete, quality data for their analytical needs.

In a separate report from Dun & Bradstreet (D&B), analysts similarly found that CFOs have new opportunities and challenges ahead when it comes to data management. Nearly half of the professionals surveyed by D&B collect data in silos and struggle to share that information across departments, signaling a top challenge to executives’ data goals.

“It’s hard to escape from the hype surrounding all the possibilities available to finance leaders to help manage their organizational risk,” wrote D&B Global Head of the Trade Credit Business Eric Dowdell in the “The Future of Risk Management” report. “We hear almost daily of new use cases and developments in technology, data and tools such as machine learning, robotics process automation [RPA], and cloud-based systems to manage risk.”

These technologies — and others — are touted as tools that can secure data, improve its quality and elevate CFOs’ abilities to analyze and gain meaningful, actionable insight into their operations. Yet, Protiviti’s report found these tools are landing at the bottom of these executives’ priority lists. For instance, only 20 percent of CFOs ranked RPA as a top priority, while blockchain, smart contracts and virtual currencies also failed to secure top spots on their lists.

What’s more, not only are these technologies rarely prioritized by CFOs, but Protiviti researchers found that these professionals are ranking them as their lowest priorities. For example, 72 percent of CFOs rated their prioritization of virtual currencies to be between levels one and three. Fifty-two percent said the same about blockchain and smart contracts, while 44 percent ranked RPA as their lowest priorities.

According to Wright, the survey does not imply that organizations are not eventually going to adopt some of these solutions, particularly RPA. Rather, placing these tools lower on their priority lists more than likely stems from CFOs’ “caution,” he said.

“They want to make sure these technologies work as expected,” Wright continued. “To almost fill in the blank at the end of the sentence, they’re not using RPA or blockchain at this time.”

It’s a matter of time and comfort level, he noted, and as more CFOs use these solutions, awareness and education will likely spread. That may not be the case for all technologies analyzed in Protiviti’s report, however.

Wright predicted that though blockchain is likely to gain traction, cryptocurrencies — thanks to their volatility — are less of a certainty. According to Protiviti, technologies like cryptocurrencies may only provide hypothetical benefits and opportunities for executives, while other technologies like RPA will likely take some time, effort and education to show CFOs their actual, tangible benefits.

As for tools like RPA, however, heightened pressures for the finance team mean many CFOs simply will not be able to afford to ignore the opportunity.

“[The market is] becoming less dependent on theory, and more dependent on companies having a good grasp of the data,” Wright said. “It’s a matter of evolution as companies get more comfortable.”