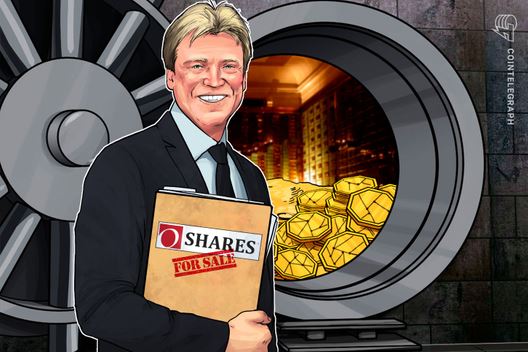 Patrick Byrne, who resigned as CEO of Overstock last month, has sold his 13% stake in the firm for $90 million to move to gold and crypto trading.

Former Overstock CEO Patrick Byrne has sold his 13% stake in the firm for $90 million to move to gold and crypto trading.

Byrne, who resigned from Overstock on Aug. 22, cashed out nearly 4.8 million Overstock (OSTK) shares, which accounts for more than 13% of the company, American financial publication MarketWatch reported on Sept. 19.

According to a filing with the United States Securities and Exchange Commission (SEC), the former Overstock CEO was selling his shares at lower and lower prices over the past three days, ranging from $21.84 on Sept. 16 to $16.32 on Sept. 18.

“Counter-cyclical to the economy”

Following the filing, Byrne published a public letter titled “A Message to My Former Colleagues at Overstock” on Sept. 18, in which he revealed his plans to stop trading anything else except the three assets that are “counter-cyclical to the economy,” including gold, silver and “two flavors of crypto.”

In the blog post, Byrne explained his choice to trade gold and silver because they are stored outside of the U.S., while it will be safe for him to have the assets stored in Switzerland and some other locations that are out of reach of the “Deep State.” Concerning crypto, Byrne wrote:

“The crypto is stored in the place where all crypto is stored: in mathematical mist, behind long keys held only in the memory of someone who is quite good at storing such things in memory.”

Meanwhile, Overstock saw its shares hitting a 52-week high last week amid the upcoming special dividend planned for next week, according to MarketWatch. However, Byrne’s cashing out caused a notable slip of OSTK shares, which reportedly dropped 21% on Sept. 16, 11% on Sept. 17 and 8% on Wednesday. At press time, OSTK is down 3.5%, trading at $15.6.

Recently, Overstock’s interim CEO urged that Byrne’s exit from the company has nothing to do with the allegedly ongoing regulatory investigation by the SEC, which was first revealed in December 2017. Still, Byrne’s move appears to have affected Overstock as one of the key corporate investors in Overstock’s blockchain subsidiary tZERO backed out from the investment four days after Byrne announced his resignation.