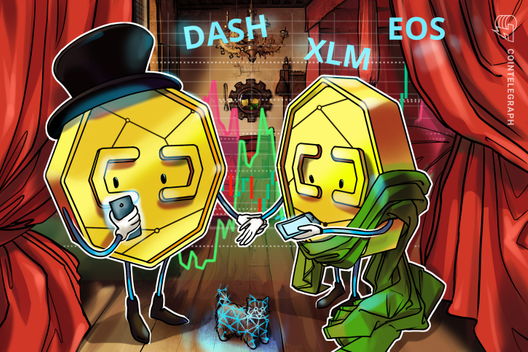 What are the critical levels that will confirm a new uptrend in the top three losers of the past seven days? Let’s look at the charts.

Market data is provided by HitBTC.

Cryptocurrency discussions in online forums are surging and about 85.5% of the conversations are positive in nature, according to technology researchers Comparitech. This shows that sentiment is bullish among participants. They were most positive on Facebook’s Libra currency with 97.7% of discussions being on the favorable side. However, when it came to media outlets, the number of negative articles outweighed the positive ones.

Since the last financial crisis, the central banks around the world are on a money printing spree. Even when markets have stabilized, at the slightest hint of a slowdown they resort to additional stimulus measures. Hiromi Yamaoka, former Bank of Japan executive, said that extensive use of Libra will force central bankers to “discipline themselves” and avoid debasing the value of their respective currencies.

With sentiment gradually turning bullish again after a period of profit booking, is it a good time to do bottom fishing? Let’s look at the charts of the top three losers of this week and determine whether they offer a buying opportunity at current levels.

Dash (DASH) is consolidating in a downtrend. The price has been stuck between $95.4264 and $120.8464 for more than 15 days. However, instead of oscillating between the boundaries, the price is stuck close to the center. This shows a lack of interest both among bulls and bears.

However, as the price is below both moving averages and RSI is in negative territory, bears have the upper hand. The down move will resume if the DASH/USD pair plummets below $95.4264. There is a minor support at $86.3249, below which the digital currency will complete a 100% retracement of the rally and fall to $58.49, the level from where the up move had started. However, we give this a low probability of occurring.

If the price breaks out of the downtrend line and 20-day EMA, it will indicate strength but the pair will start a new uptrend after it breaks out of $120.8464. The first target will be $146.2664, above which a rally to $160 is likely. Though 50-day SMA might offer some resistance, we expect it to be crossed. The longer the digital currency stays in a range, the stronger its eventual breakout will be. As the risk of a breakout or a breakdown is equal inside the range, we suggest traders wait for the breakout to buy.

Stellar (XLM) has been an underperformer for the past few months. While most major cryptocurrencies are far above their yearly lows, it has dropped back close to its lows. This shows a lack of demand at higher levels. Can it break down and make new lows or is it showing signs of bottoming out? Let’s find out.

Both moving averages are trending down and RSI remains in the negative zone. This shows that bears are in command. If the price breaks down of $0.076, it will dip to $0.072545. A break down to new yearly lows will be a huge negative as it will trigger many stop losses.

However, for the past seven days, the price has remained stuck in a tight range, which suggests that both bulls and bears are not waging a large bet as they are not clear of the next direction. When there is uncertainty, the best strategy is to wait on the sidelines.

A breakout of 20-day EMA will be the first sign of buyers returning to the counter. The next overhead resistance is at $0.10. The 50-day SMA is also located at this level. If this resistance is scaled, a rally to $0.145 is possible.

EOS rounds up the top three losers with a marginal loss of just over 1% in the past seven days. Will it fall further or does it offer a good buying opportunity at these levels? Let’s analyze the chart.

The digital currency had rallied from a low of $1.58340 on December 07 to a high of $8.68717 on May 31. That is a 448% rally within six months. After such a sharp rally, some traders would have booked profits that started the pullback. However, in a strong uptrend, the pullback usually gets arrested between 38.20% and 50% Fibonacci retracement levels of the rally.

If the correction deepens, the rally loses steam. The EOS/USD pair declined close to 78.60% Fibonacci retracement level of the rally on July 16. Therefore, we anticipate the pair will take a long time to resume their uptrend.

Currently, the digital currency is trading inside a descending channel. Both moving averages are trending down and RSI is in the negative zone, which shows that bears are in command. The first indication of a change in trend will be when the price breaks out of the moving averages. A breakout and close (UTC time frame) above the channel can be purchased as it increases the probability of the start of a new uptrend that can carry the price to $6 and above it to $7.64. However, we suggest traders avoid bottom fishing until the price remains below both moving averages.

Market data is provided by HitBTC.