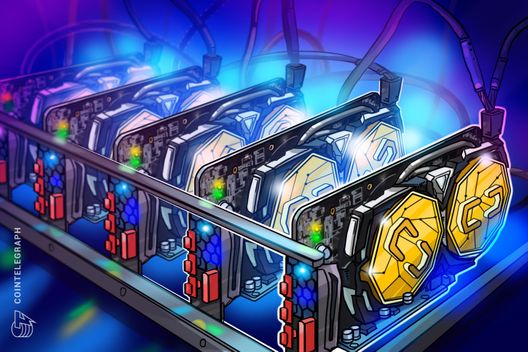 Japanese IT giant GMO Internet Group has published the latest monthly disclosure on its in-house crypto mining operations, confirming that it took a steep hit in overall mining revenue. GMO released the disclosure in a publicly available document on Jan. 8, also revealing a steady increase in its monthly Bitcoin (BTC) mining rewards.

As a result, the firm announced it would be shutting down its hardware manufacturing business, but would nonetheless continue its in-house mining operations. These latter will be reportedly subject to restructuring, with plans to relocate GMO’s mining center to a region with lower-cost electricity supplies.

As revealed in GMO’s latest monthly report, even as overall revenue from mining has tanked, the firm’s Bitcoin mining reward has consistently increased over time — from just 21 BTC in December 2017 to 528 BTC in June 2018, and then 960 BTC in December 2018. In its disclosure, the company explains that as “the market’s total hash rate decreased, so our mining share rose and our mining reward expanded.”

GMO’s disclosure also give data for its hash rate, measured in PH/s — where one PH/s indicates the amount of computation is 1 peta (1,000 trillion) times per second.

As GMO explains, increased hash rate does not necessarily lead to increased mining rewards, as “for each currency pair, profitability fluctuates and the allocation of hash rate is based on an algorithm.”

The firm also gives full data on mining rewards and hash rate for the other cryptocurrency it mines, Bitcoin Cash (BCH) — which it notably apparently did not mine at all in December 2018. For BCH, mining rewards have fluctuated wildly, from 213 BCH in December 2017 to 62 BCH in June 2018, rising to 875 BCH in October before falling to 400 BCH in November. The BCH hash rate has similarly risen and fallen and risen again over time.

GMO has today stated it will no longer report monthly on its crypto mining business in 2019, but will disclose the results as part of its quarterly earnings announcements instead.

Other major mining industry players are similarly feeling the pressure of the 2018 crypto bear market: Bitmain closed down its Israeli operations in December, and reports have since continued to surface indicating looming layoffs at the firm.