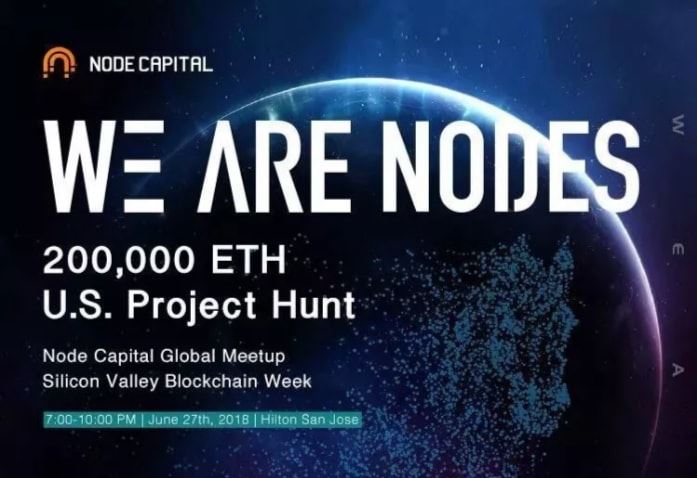 The China-based venture capital firm, Node Capital is set to invest 200,000 Ethereum, currently worth $86 million, into blockchain startups. At present the company has invested in over 160 blockchain companies. According to founder, Du Jun, 80% of these firms are based in China.

Despite the latest downturn in the market, VCs are still bullish on backing blockchain technology firms. On June 26, Andreessen Horowitz (a16z) announced a $300 million cryptocurrency fund. Although the Wall Street Journal reported this as the only cryptocurrency fund run by a major VC firm, Node Capital’s announcement shows that there are many other players in the space than previously thought.

Node Capital announced the plan during their event, “We Are Nodes” in San Jose, California on June 27th as part of Silicon Valley Blockchain Week, at the Hilton San Jose Hotel.

Node Capital is a co-sponsor of the Silicon Valley Blockchain Weekly. They are a VC company that specializes in blockchain technology, as a pioneer in deploying blockchain ecosystems. These include news and information, digital asset transactions and storage, and technology development.

Node Capital plans to set up a U.S. office with a local team to support the blockchain startup projects. These will be added to the over 160 existing projects, which include the hardware wallet manufacturers Coldlar, as well as Junse Finance, a large cryptocurrency media outlet in China.

The VC firm also has its hands in over 20 digital asset exchanges, including FCoin and its “trans-fee mining” revenue model. Barely a couple of months old, FCoin is moving $5.6 billion in trading volume over a 24-hour period, an amount that surpasses the total transaction volume of the top 10 platforms listed on CoinMarketCap, which total just over $916 million in 24-hour volume. FCoin is founded by Zhang Jian, the former CTO and co-founder of Huobi. The model is different from other exchanges in that it turns cryptocurrency trading into a mining process. With a cap of 10 billion FT coins, 51% will be allocated to the public, while 49% will be held by FCoin and their investors.

Technology investors, and particularly Fintech investors are in agreement that the blockchain and cryptocurrency industry can be profitable. Although they don’t all agree on how to best capitalize on the market, money continues to flow into the many ideas. In the case of Node Capital, it is as if they are throwing mud at the wall. With this additional injection of 200,000 ETH into blockchain startups, they’ll soon have over 200 blockchain projects under their umbrella. With FCoin and other successful projects as part of their portfolio, they’ve already got some winners in the world of crypto, and soon, they’ll have more.