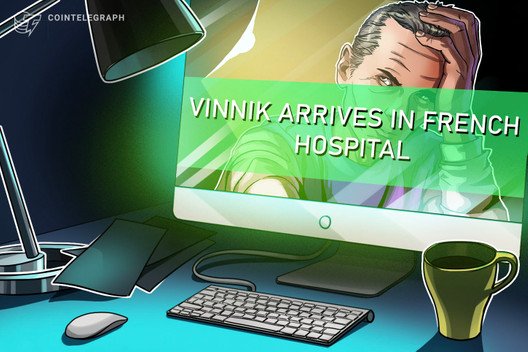 According to a Facebook post by Alexander Vinnik’s lawyer, Zoe Konstantopoulou, the alleged BTC-e money launderer has successfully been extradited to France.

According to a Facebook post by Alexander Vinnik’s lawyer, Zoe Konstantopoulou, the alleged BTC-e money launderer has successfully been extradited to France.

In a post on the social media site at UTC 8:10, Konstantopoulou wrote:

“Alexander is at Hotel Dieu Hospital in Paris, as my French colleague informed me, while the Greek authorities are hiding and pretending to know nothing. She hasn’t been allowed to see him yet and they will try to question him tonight, exhausted and without communication or information! I already sent a request to postpone his hearing for tomorrow

If this is not a complete leveling of the rule of law, what is it?”

Cointelegraph reported earlier today, Jan. 23, that Greece had agreed to extradite Vinnik to France, contrary to the wishes of Vinnik and members of the Russian government.

However, this announcement was followed by some uncertainty, as Russian news outlet RIA Novosti reported on confusion among Vinnik’s lawyers after Vinnik was taken away from the hospital that housed him in Greece. His whereabouts at the time was unknown for some time.

His condition in question

Regarding the state of her client, Ms. Konstantopoulou wrote on Facebook:

“In every way the government is trying to scare him, terrorize him, in a moment of great agony, while his health has worsened […] A man 30 months imprisoned, without charge, on the limits of existence, who fights with his only weapons — his body and life — is also suffering from a psychological war.”

Vinnik was arrested in late-July 2017 for laundering $4 billion in Bitcoin over six years as head of BTC-e, one of the world’s largest exchanges. The new few years saw a three-country tug-of-war over Vinnik, a Russian national.