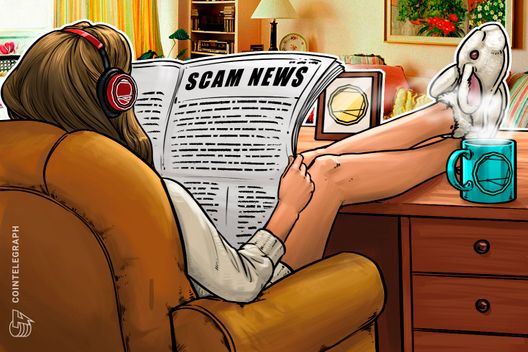 A Maltese actor and two TV show hosts notify the police following a fake news article about their involvement in a crypto investment scheme.

A Maltese actor and two hosts of a local TV show have notified the police after a false report that they are involved in a Bitcoin investment scheme called “Bitcoin Revolution.” The story was reported by the Malta Independent and Malta Today on Thursday, Jan. 10.

As per the Malta Independent, an article with a fake endorsement of Bitcoin Revolution was initially published on a website called Major News. It depicted two hosts of the One Breakfast show, Wayne Sammut and Elaine Degiorgio, and falsely claimed that Davide Tucci, a Maltese actor and TV star, was a guest on their show.

Major News continued its false report by claiming that Tucci convinced Degiorgio — as they were “on air” — to make a 250 euro deposit to a trading platform called Bitcoin Revolution, which supposedly had helped himself out of bankruptcy. The money invested during the fake “show” has increased to 483.18 euro “within three minutes,” Major News added.

The media outlet’s fake report also provided detailed instructions on how to use the platform and instructed potential customers on how to sign up.

Tucci quickly reacted to the fake news article, posting a video statement on his Facebook page. He claimed that he has never promoted or engaged in any activities related to Bitcoin or other cryptocurrencies, describing any reports to the contrary as a scam: “This is clearly a scam and click-bait, please don’t buy into this.”

Furthermore, Tucci declared that he has reported the case to the Malta Police Force’s Cybercrime unit.

The One Breakfast hosts Sammut and Degiorgio have told the Malta Independent that Tucci had never been their guest and no investments had ever been made live on their show. They have similarly notified the Maltese police of the incident.

Another local news outlet Newsbook asked the Malta Financial Services Authority (MFSA) to clarify the legal status of Bitcoin Revolution. The MFSA responded, stating that the company of that name had never been authorized by the Maltese government. In addition to that, the regulator has informed Newsbook that it is conducting its own investigation into the case.