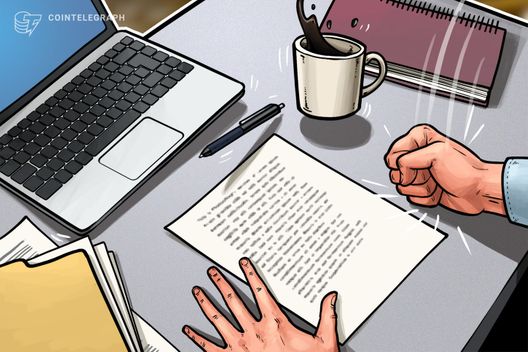 Major crypto exchange Bitfinex has responded to a recent media report that accused the exchange of publishing trading volume data from “a market that doesn’t exist.”

Major crypto exchange Bitfinex has responded to a recent media report that accused the exchange of publishing trading volume data from “a market that doesn’t exist,” in a tweet posted Oct. 23.

The controversy centers on an article from crypto media outlet CoinDesk, which had alleged that Bitfinex’s data on popular crypto statistics aggregator CoinMarketCap (CMC) was misleadingly inflated by reporting on a stablecoin Tether (USDT)-U.S. dollar trading pair, which as of press time appears to account for $33,598,474 — or 18.30 percent — of a total 24-hour traded volume of $182,742,351.

The article had argued that since the exchange does not provide a USDT/USD trading pair, this was an intentional strategy to make it appear as though a large volume of such trades were occuring on the exchange. In fact, Bifinex users are only able to deposit and withdraw both Tether and U.S. dollars through their accounts, rather than execute such trades.

A representative from CMC disclosed that the data was derived from Bitfinex’s in-house public application program interface (API), and was represented in CoinDesk’s article as being “confused” herself as to the meaning of the data point.

Bitfinex has tweeted its response to clarify its position, with a link to the original CoinDesk article, stating that:

“api.bitfinex.com/v1/movement_volume/tether … is the sum of USDt dep/wds to/from Bitfinex. We are not ‘publishing’ fake numbers; the API method is called ‘movement_volume’ and isn’t part of our ticker API. Not pushed by us, pulled by CMC. Another not-so-brilliant example of anti Bitfinex/Tether FUD.”

The API link that was provided by both the exchange and CMC’s representative to Coindesk does not lead to a live website as of press time. On Bitfinex’s website, it is noted that some parts of the API may require authentication.

Bitfinex has not responded to Cointelegraph’s request for a live link by press time.

Bitfinex has recently been prompted to deny rumors that it was “insolvent” or facing banking issues in response to reports that its banking partner, Puerto Rico’s Noble Bank International, was seeking a buyer and had lost both Bitfinex and affiliated firm Tether as clients.

The following week, the platform temporarily suspended all fiat wire deposits without providing a specific reason, although it had acknowledged in its prior statement that “complications continue to exist” for Bitfinex “in the domain of fiat transactions.”

The exchange’s circuitous history of banking relationships dates back to April 2017, when U.S. bank Wells Fargo & Co. allegedly refused to continue operating as a correspondent bank. Bitfinex then filed a lawsuit against the bank that was quickly dropped.

Tether, for its part, has faced repeated criticisms of inadequate transparency over its claims to be backed one-to-one by the U.S. dollar, with some going so far as to accuse the firm of covering up an alleged fiat reserve deficit in complicity with Bitfinex.

The rumors intensified when Tether allegedly dissolved its relationship with a third-party auditor this January. However, an unofficial audit in June reported that Tether did have the appropriate amount of dollar reserves held in an unnamed bank.

Crypto investor and entrepreneur Michael Novogratz recently remarked on the Tether transparency controversy just as the stalwart coin had briefly lost its U.S. dollar peg, at one point trading as low as $0.91, amid reports of investors’ “loss of faith” in the asset.