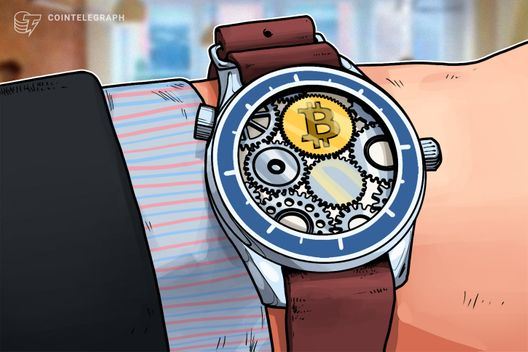 Swiss luxury watch brand Hublot has unveiled its new watch Big Bang Blockchain in an official announcement September 19. The new model has been released to commemorate the upcoming 10th anniversary of Bitcoin (BTC).

As per Hublot’s release, the 210-piece limited edition can only be purchased with BTC. The number of units symbolises the fact that the number of bitcoins will never exceed 21 million.

To promote and sell the model, Hublot has partnered with Octagon Strategy Limited (OSL) –  a major Asian digital asset brokerage which will help process customer data during the pre-sale.

To purchase a Big Bang Blockchain, a customer has to register on a dedicated website. OSL will then confirm the data and send the payment details via email. The new Hublot model will be delivered to its buyers in the beginning of 2019.

The elite Swiss brand has also paid a tribute to blockchain technology, calling it “a revolution in the financial system”. Hublot further explained the importance of decentralization:

“By allowing digital information to be distributed, Blockchain technology creates the backbone of a new type of Internet. Well-recognised for its originality, the technology is regarded as one of the most powerful and fastest-growing trading tools, not to mention unlimited possibility of usage in different aspects that will revolutionise various industry norms and trade.”

The Swiss brand is not the only one to commemorate Bitcoin’s upcoming anniversary. For instance, an art gallery in Paris has announced an exhibition called Bitcoin Art (R)evolution which aims “to show the potential of cryptocurrencies”.

According to a press-release, each item at the event can be purchased both with BTC and other cryptocurrencies (Litecoin, Monero, Ethereum).

Bitcoin originally emerged in 2008, at the height of the global financial crisis, when a white paper authored by the pseudonymous Satoshi Nakamoto was published.

The white paper, titled “Bitcoin: A Peer-to-Peer Electronic Cash System,” was released on bitcoin.org on October 31 – a date that is widely considered as ground zero for BTC, although the first actual bitcoin was mined on January 3, 2009.

Over the almost ten years since the mining of the first Bitcoin block, many have proclaimed the cryptocurrency dead – more than 300 times overall, as Cointelegraph reported earlier. However, BTC remains the most popular cryptocurrency in the world, with a current market capitalization of over $115 billion, according to CoinMarketCap.