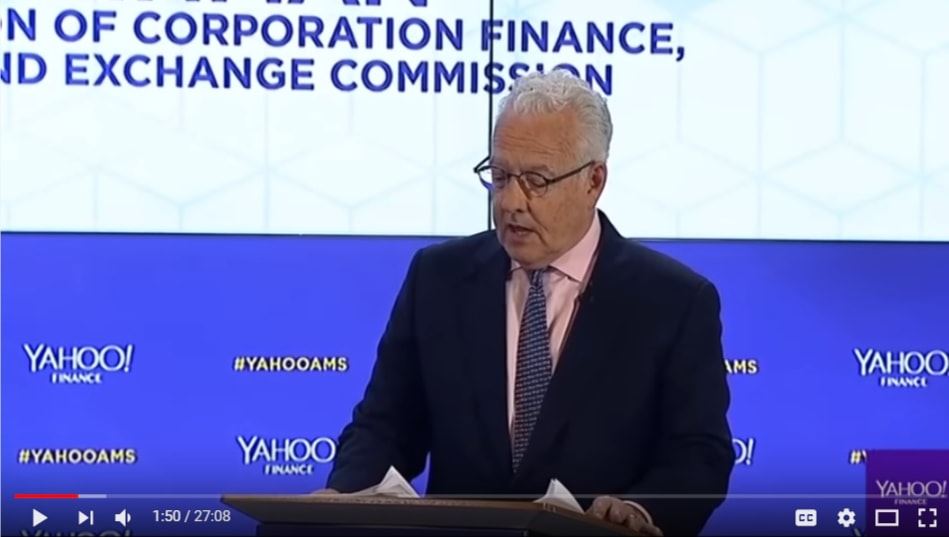 William Hinman, the SEC Director of the Division of Corporate Finance, spoke at the Yahoo Finance Summit, and provided clarity on whether a token sale, ICO or other digital assets are securities or not.


First, it is important to understand that this interpretation of what qualifies as a security is not codified into law. It is the opinion of William Hinman. However, in Hinman’s role, he more or less provides the official interpretation of the law for the SEC, which translates into how they go about enforcing regulations on digital assets. People who plan to launch an ICO, token or other exchange of value should consult with an attorney who is an expert at laws and regulations pertaining to cryptocurrencies.

Hinman does not consider either Ethereum coins or Bitcoin to be securities. Based on these specific examples, he went deeper to speak in terms of generalizations, citing a few examples of what would constitute securities, and what would not. That said, the original sale of Ether, based on Hinman’s definitions outlined below, does appear to have been a security.  This is because the SEC, and lawyers will typically consider the coin itself, and the sale of the coin to be two separate things. The sale of the coin includes certain managerial activities and the physical transfer of the coin from the organization that created it, to a number of purchasers.

One lawyer who specializes on cryptocurrencies is Marco Santori, the President and Chief Legal Officer of Blockchain, a software platform for digital assets. He analyzed Hinman’s speech in a series of tweets to help provide clarity to people who had trouble following the content.

According to Santori, the Howey Test is an important factor in determining whether a token offering is a security. This test was created by the Supreme Court, to determine whether certain transactions qualify as “investment contracts,” which would make them subject to disclosure and registration requirements as outlined in the Securities Act of 1933, and the Securities Exchange Act of 1934.

According to these two securities acts, securities include investment instruments such as notes, stocks, bonds and investment contracts. In the case, SEC v. Howey in 1946, the Supreme Court needed to decide whether a leaseback agreement was considered an investment contract by law. Two corporate defendants in Florida were selling real estate contracts to people, for tracts of land with citrus groves. The defendants then gave the buyers of those tracts of land the option to lease that land back to the defendants, who would then perform the work required to grow, market and sell the citrus fruits. Most of the buyers were not farmers, and chose to lease the land back to the defendants under this arrangement. The SEC in turn sued the defendants, claiming that these transactions should have been filed with them as securities. The Supreme Court sided with the SEC and determined that the leaseback agreements were in fact securities, and developed the Howey Test to determine whether transactions are investment contracts, subject to securities regulations. The Howey Test has four points:

The term, “money” in this context has been expanded to include numerous other assets, including digital assets. The term, “common enterprise” generally means that investors pool their assets to invest in a horizontal project. The profits that are derived from the investment would be those that are mostly outside of the investor’s control. If all of these factors are applicable, then the investment is likely a security. However, if the investor’s own actions will be a significant, determining factor in whether an investment is profitable, then the investment probably isn’t a security. In addition, it is important to understand that different states have their own “Blue Sky” laws regarding securities, which must be taken into consideration in addition to the federal requirements.

As Santori pointed out, the citrus fruits had a consumptive, functional use, in that they could be eaten. This would be akin to a digital currency or token having utility outside of the dollar amount associated with its valuation. In the case of Ethereum, a user may create new tokens and smart contracts using the ERC-20 platform. In this way, Ethereum has utility in the way that citrus fruits have utility. This was pointed out previously by Attorney Lee Schneider who was also credited as one of the authors of a report on the risks related to the use of a SAFT (Simple Agreement for Future Tokens) for token sales in November 2017. So, at the time that the Ethereum Foundation first delivered Ether coins, that transfer of assets passed the Howey test, meaning that it was a security. However, the decentralized nature of Ether today means that it is not a security, because the Ethereum Foundation no longer has control over how it is sold and traded.

Santori interprets Hinman’s explanation in the following way. A token is “sufficiently decentralized where purchasers would no longer reasonably expect a person or group to carry out essential managerial or entrepreneurial efforts.” In other words, sufficient decentralization, which causes the token to fail the Howey Test, such that it is no longer a security, occurs when the efforts of the third party are no longer an important factor in determining the enterprise’s success. This comes directly from the last point of the Howey Test.

According to the SEC, there is no way to say whether a SAFT is legal or not based on the current laws. This is because each token is unique, in the sense that individual tokens have unique identifiers and are assigned to unique wallets controlled by different users, and every transaction is different. In the case of Ethereum, we can presume that the token evolved from a security at the time of the offering, to a non-security now that it is sufficiently decentralized, and due to the economic realities of each transaction.

At the end of the speech, Hinman stressed the “full functionality” of a given token when applying the Howey Test. If someone artificially sets the price of the token, and then takes additional steps to influence trading in secondary markets, then it’s likely to be a security. This would be akin to the leasebacks in the case of SEC v. Howey. Another case that might make an ICO fall into the realm of securities is if they are being sold in large quantities that go beyond the quantity required for its potential use.

By contrast, if a token has built-in incentives for use that presumably can outweigh the benefits associated with holding the token in the hopes that the price appreciates, then it is likely to be a nonsecurity. This security vs. nonsecurity status also extends into the way the token is advertised. If they are being promoted to the general public as having a particular use-case, then they may not be securities. However, if they are advertised as investments that will increase in value over time, then they most likely are securities.

Santori summarizes his analysis by stating that not all SAFTs will be considered to be compliant. According to Santori, “The facts, circumstances and economic realities will be unique in every transaction.” Generally he sees most tokens as securities in the eyes of the SEC, when they are “pre-functional” – as is the case for virtually every ICO. However, he warns that functionality is just an indicator, and not an end-all-be-all for deciding nonsecurity status.

The clarifying statement that Hinman provided should help startups in deciding on how to structure their ICOs, and whether to use the model at all, versus a more traditional fundraising method. For example, some projects are moving over to platforms like StartEngine, and choosing to register as crowdfunding projects that are more clearly defined.

The most positive outcome from this new statement from the SEC is a booming token economy. As developers begin to understand the rules that are now more clearly defined, they can produce lots of compliant tokens without fear of an SEC crackdown.

This statement does, however, keep most ICOs in the realm of securities, and thus the market limited to accredited investors in the US. While this isn’t the greatest news for retail investors who lack the net worth and salary requirements for accreditation, it does keep the market open to more people than the most conservative approach to this problem where some ICOs are denying US investors and even going so far as to block US IP addresses.

The next step would be for other government organizations to provide additional clarity. For example, now that the SEC has provided guidance on what qualifies as a security, and what does not, it would be good for the IRS to outline more specific rules on how the buying and selling of tokens will be taxed. We can also expect some clarifications from the CFTC on whether tokens become commodities at a particular moment of time, and based on their utility, or lack thereof. Last, Santori believes that while the SEC announcement was helpful to the industry as a whole, it is bad news for custodial providers, exchanges and OTC desks that trade tokens. You can read his thoughts here.