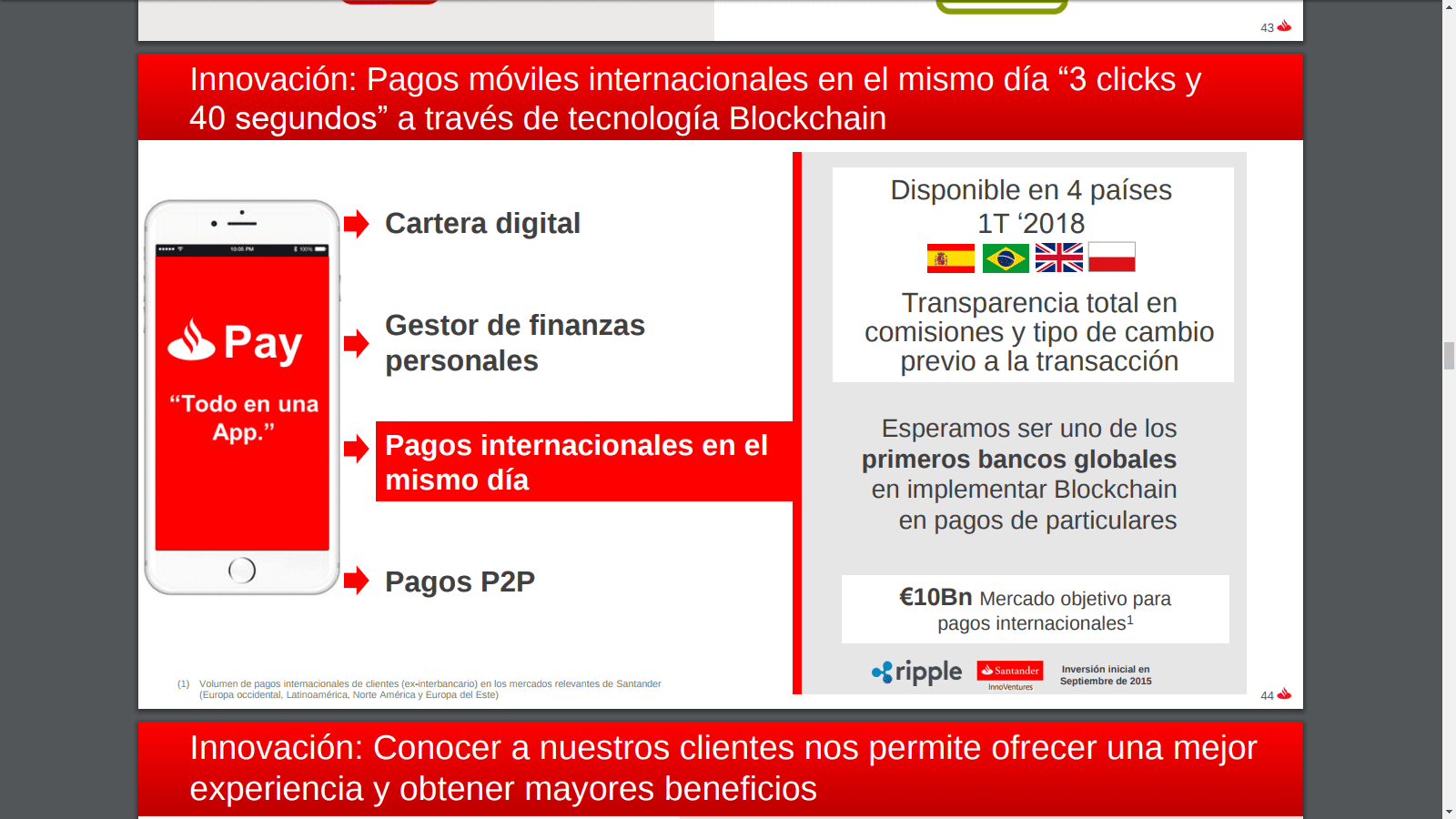 UK bank, Santander has confirmed that it will release an international money transfer app within a few months, powered by Ripple, as reported by Business Insider. According to the Santander UK CEO, Nathan Bostock, “This spring, if no one beats us to it, we will be the first large retail bank to carry out cross-border payments at scale with blockchain technology.”

Santander is not the first bank to utilize Ripple technology. Asian banks have been testing this blockchain for cross-border transfers, and Moneygram agreed to try out a partnership with Ripple in January, using their xRapid tech to speed up money transfers. The difference with the Santander deal comes in the form of two words: at scale.

If the bank is successful with its release of the app, it could be a major development for Ripple, and for blockchain technology in general. The app will launch in four countries: the UK, Spain, Brazil, and Poland.

Bostock announced the deal at the International Fintech conference in London on Friday March 23rd. According to Bostock, the app will use Ripple’s blockchain technology, xCurrent, along with RippleNet products. There is no specific date for launch.

Santander has been an investor in Ripple since October, 2015, when it invested in the start-up to develop a proof-of-concept product. This investment came in the form of an estimated $4 million USD from the Santander InnoVentures $100 million tech investment fund, and another injection of cash during a Series B round in September, 2016.

The app was mentioned by Santander CEO Ana Botin in a 2017 results presentation at the end of January. When the internal beta app was tested with Ripple’s technology, it enabled transfers to be settled within 24 hours, a much shorter timeframe than the period of several days with traditional cross-border methods.

In addition to speeding up cross-border transfers, xRapid will also provide more transparency on transfer costs by cutting out the middle men that traditional methods utilize, where each adds more costs to the transfer along the way, often delivering a sum that is less than the original transfer amount.

Ripple has a market cap of $24.92 billion according to CoinMarketCap and is currently trading at $0.637. News of the payment app does not appear to have had a significant effect on the price of XRP. Perhaps this will change after the weekend, or in a few months when the app is expected to go live. With several months to go, it is also very possible that a competitor payment app may be released. However, if Santander does manage to bring their app to market before other major institutions, they will no doubt gain a foothold in cross-border payments, enabled by blockchain technology.