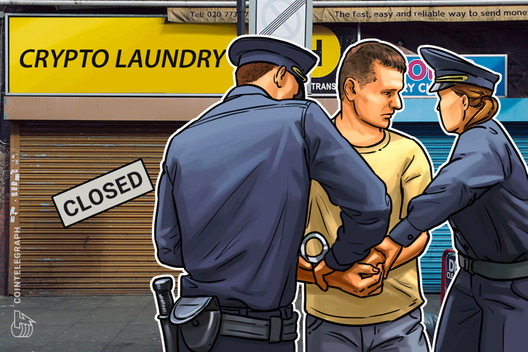 Authorities have taken an Ohio resident into custody for allegedly laundering $300 million in Bitcoin as part of a Dark Web tumbler service.

Authorities recently took an Ohio local into custody recently for accusations of running an unlawful money laundering outfit on the Dark Web.

The alleged operator of an illegal business called Helix, Larry Harmon faces accusations of money laundering and running a money transference venture without proper licensing, the Department of Justice, or DoJ, detailed on Feb. 13.

The 36-year old Ohio native reportedly started up Helix in 2014, taking the endeavor all the way to crypto’s hay day in 2017. The DoJ explained:

“Helix functioned as a bitcoin ‘mixer’ or ‘tumbler,’ allowing customers, for a fee, to send bitcoin to designated recipients in a manner that was designed to conceal the source or owner of the bitcoin.”

Per the allegations, Harmon attracted users by touting the ability to hide fund transfers from the government’s watchful eye. As part of his dealings, Harmon also operated a Dark Web search tool called Grams.

The Ohio man was in deep

Harmon’s supposed endeavors naturally tied him to other Dark Web illegalities. “Helix allegedly laundered hundreds of millions of dollars of illicit narcotics proceeds and other criminal profits for Darknet users around the globe,” Assistant Attorney General for the DoJ’s Criminal Division Brian Benczkowski said in the statement.

“The sole purpose of Harmon’s operation was to conceal criminal transactions from law enforcement on the Darknet, and because of our growing expertise in this area, he could not make good on that promise. Working in tandem with other sites, he sought to be the ‘go-to’ money launderer on the Darknet, but our investigators once again played the role of criminal disrupters, unraveling the interlinked web from one tentacle to another.”

Charges include that Harmon’s Helix outfit transferred more than 350,000 Bitcoin — worth upward of $300 million at the time. The illegal entity also powered money laundering activities for users of AlphaBay, a highly trafficked Dark Web vendor, the DoJ detailed.

The DoJ pointed out, however, that the charges provided are still considered alleged activities until definitive guilt is proven.