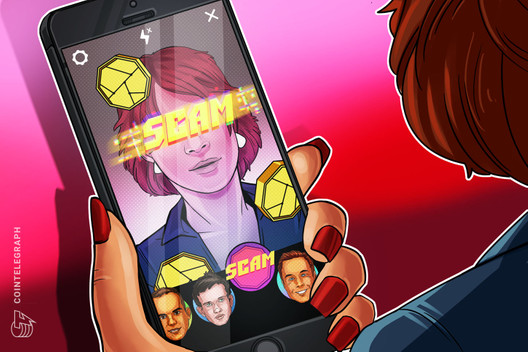 Instagram says deceptive advertisements have no place on its platform and plans to continue improving its detection protocols for such content. Social platforms have been known to censor crypto-related content, instituting blanket bans on crypto ads on several occasions.

However, Facebook has recently relaxed this policy amid the roll-out of its own digital currency project. The social media giant is one of the main backers of the Libra Association, which plans to release the Libra digital currency payment solution.

While many of these fraudulent crypto investments use fake endorsements, there are also cases where well-known crypto figures publicize such cons as legitimate investments. The presence of such backing seemingly provides legitimacy for otherwise obvious scams that end up siphoning millions of dollars from unsuspecting victims.

As previously reported by Cointelegraph, Bitcoin scam ads touting false endorsements from Martin Lewis are appearing once again on social media. Retweeting the scam ads now appearing on Instagram, Lewis warned the public to not fall victim to such obvious cons.

The misleading adverts show a fake article from British tabloid Mirror with the title, “Martin Lewis lends a hand to British families with Revolutionary Bitcoin Home Based Opportunity.” No such article exists on Mirror, with the media outlet issuing warnings about similar phony content as far back as August 2018.

The particular scam in question was red-flagged in late 2019. In an email to Cointelegraph, a spokesperson for Facebook, the parent company of Instagram, explained that the platform has a zero-tolerance policy for scam ads. According to the company spokesperson:

“Misleading or deceptive ads of any kind, have no place on Instagram. Our Advertising Policies do not allow scam ads, and when we detect an ad that violates our Advertising Policies, we disapprove it. All ads are subject to our ad review system, which relies primarily on automated, and in some cases manual review to check ads against these policies. This happens before ads begin running.”

The Facebook representative further went on to state that while some misleading content may slip through the cracks, platform users should report such ads:

“We incorporate signals of negative feedback from people, such as people reporting, hiding, or blocking an ad, into our ongoing review process. When we find ads that try to get around our enforcement, we go beyond simply rejecting the ad. We disable ad accounts and remove their ability to advertise in the future.”

Back in 2018, Lewis sued Facebook following the emergence of more than 1,000 scam ads featuring the financial expert. In 2019, the two parties settled the suit, with Facebook pledging to donate $3.9 million to Citizens Advice — a Scams Action service for the United Kingdom.

The social media giant also agreed to create a unique tool for reporting scam ads in the U.K. Commenting at the time, Lewis remarked:

“It shouldn’t have taken the threat of legal action to get here. Yet once we started talking, Facebook quickly realised the scale of the problem, its impact on real people, and agreed to commit to making a difference both on its own platform and across the wider sector.”

Lewis isn’t the only person to sue Facebook because of Bitcoin scam ads. Back in mid-2019, Dutch billionaire John De Mol took legal action against the social media company over fraudulent cryptocurrency adverts using his image without permission.

At the time, De Mol argued that the scam ads were damaging to his reputation and had defrauded victims of close to $2 million. The court sided with the Big Brother reality show creator, ruling that Facebook must make efforts to remove such content or face significant monetary fines.

Scams featuring other public figures such as Tesla CEO Elon Musk, Ethereum Co-Founder Vitalik Buterin, British actress Kate Winslet and Australian business mogul Andrew Forrest have also emerged in the past. Each ad campaign typically attempts to use the images of these well-known people to trick uninformed investors into putting money (or crypto deposits) into an elaborate scam.

According to Alex Nguyen, founding partner at XNOVO legal — a firm specializing in contracts and business structuring litigation — holding social media platforms like Facebook liable for content published by users constitutes a slippery slope. In a private correspondence with Cointelegraph, Nguyen opined:

Nguyen argues that a court could include scam ads under the broad umbrella of third-party content. Thus, it is possible to liberally apply the protection afforded by the CDA to fraudulent cryptocurrency advertising.

Apart from crypto scam ads, social media platforms have also come under criticism for allowing or failing to prevent the spread of misleading information, especially in the political scene. Facebook, in particular, continues to face backlash for its policies concerning political ads.

As is the case with crypto ads, it appears the burden of confirmation rests with users and not with the content creators or publishers. Thus, it is of paramount importance for consumers of information to do their own research and not take all information found online as gospel truth.

Even with enduring blanket bans on crypto-related advertisements, scammers are still able to publish deceptive investment content on social media platforms. This reality points to the possibility that the filters employed by Facebook and others are ill-suited to completely eradicating all instances of scam ads.

As revealed by Facebook in its email to Cointelegraph, the company employs both automated and manual content review protocols. However, scammers are seemingly able to game these control systems, enabling their misleading content to find its way online. Facebook says it is taking steps to block fraudsters from publishing content on its platform.

“It cannot be overlooked that there are always ways around whereby changing some different terminology you can still bypass computerized algorithms. So in my opinion it is more of a case of when people get lured by immediate gains and which can happen in any industry so curtailing cryptos for the same can eventually become a roadblock in adoption and awareness of crypto and blockchain looking at the outreach of Facebook and Insta.”

“I think social media platforms are in the best position to implement better policies to identify and curb the continued proliferation of false or fraudulent cryptocurrency-related advertising ex ante, especially given their unfettered access to a tremendous amount of data, technologies (e.g. artificial intelligence and machine learning) to make sense of all that data, and limitless resources.”

Are “crypto celebs” contributing to the investment scam issue?

Concerning fact-checking, endorsements by seemingly “trusted” individuals in an industry can sometimes provide legitimacy for the published piece of information, especially when the end-user does not possess sufficient knowledge about the sector in question. Thus, it becomes an even greater problem when well-known personalities contribute to the spread of misleading content by providing backing.

While there are crypto scam ads with fake celebrity endorsements, there are also fraudulent advertisements promoted by “crypto celebs.” In late December 2019, a suspected Bitcoin scammer dubbed “LÈON” orchestrated an exit scam after defrauding victims of about 53 BTC (currently worth $424,000).

“Fraud has more to do with ignorance and lack of knowledge than any social media channel as a medium. Most of these cases occur to users who lack specialized expertise necessary to distinguish legitimate from an illegitimate offer,” remarked Singh. Given the similarities in the scams adopted by these suspected crypto fraudsters, consumers need to employ more research, critical thinking and due diligence when making investment decisions.