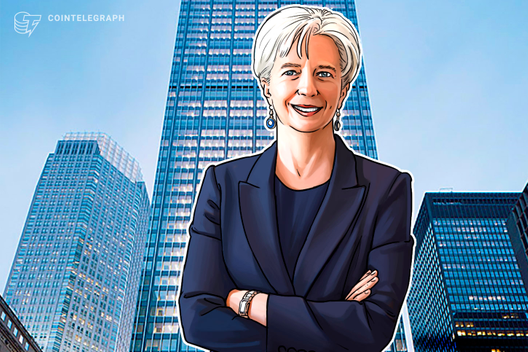 The president of the European Central Bank (ECB), Christine Lagarde, said that the financial institution should be ahead of the curve in regards to the demand of stablecoins.

The president of the European Central Bank (ECB), Christine Lagarde, said that the financial institution should be ahead of the curve regarding the demand for stablecoins.

According to a tweet by the ECB on Dec. 12, Lagarde said: “My personal conviction on the issue of stable coins is that we better be ahead of the curve. There is clearly demand out there that we have to respond to.”

Stablecoins are digital currencies pegged to a physical asset or fiat currency and designed to minimize price volatility.

In early September, when Lagarde was still the head of the International Monetary Fund (IMF) and nominee to be the next president of the ECB, she claimed that she would focus on making sure that institutions promptly adapt to the rapidly changing financial environment. Lagarde said then:

”In the case of new technologies – including digital currencies – that means being alert to risks in terms of financial stability, privacy or criminal activities, and ensuring appropriate regulation is in place to steer technology towards the public good. But it also means recognising the wider social benefits from innovation and allowing them space to develop.”

Later in September, the IMF said that stablecoins could bring significant benefits to customers and society but are not without risks.

The IMF said banks could lose their role as intermediaries, as the public would switch to stablecoin providers. However, it predicted banks would not disappear because they will likely try to compete by developing their own innovations.

Unlike Lagarde, the ECB’s former president Jean-Claude Trichet recently expressed doubt that cryptocurrencies could ever become the future of money. Trichet also explained that he believes buying crypto is, in many respects, just speculation. He also claimed that even when a crypto asset is supposedly backed by a real asset, he still observes a lot of speculation, which he concluded is “not healthy.”

Mario Draghi, who served as the president of the ECB prior to Lagarde’s appointment, said that the European System of Central Banks (ESCB) is closely monitoring developments in the cryptocurrency industry. Despite displaying a positive approach towards new technologies, Draghi apparently thought that stablecoins and cryptocurrency in general are of little value.