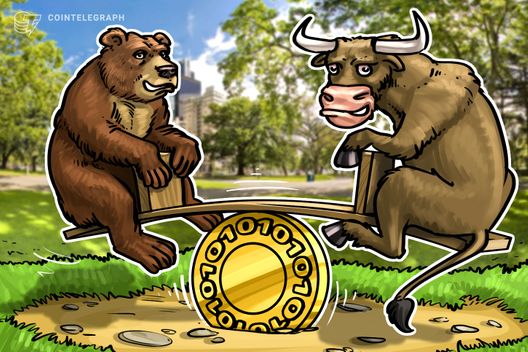 The CEO of major crypto derivatives platform BitMEX, Arthur Hayes, has said he believes the current bear market could last another 12 to 18 months.

The CEO of major crypto derivatives platform BitMEX, Arthur Hayes, has said he believes the crypto winter could last 18 months, in an interview with Yahoo Finance UK Oct. 31.

Hayes – an ex-Deutsche Bank and Citi trader who co-founded Seychelles-registered BitMEX back in 2014 -– said that “based on previous experience,” the low volatility and volume trading climate could “persist for another 12 to 18 months,” continuing:

Bitcoin has been tightly range bound around $6,300-$6,500 in recent months, and shed close to 68 percent in value since its industry-record highs in December 2017. If its relative price stability of late has been lauded by multiple commentators as a sign of market maturity, the flipside to this has been low trade volumes, which Hayes said he believes “could fall further from where they are now.”

Nonetheless, BitMEX continues to see daily trades on crypto contracts worth a “notional $1 billion” per day, and recorded its highest ever day at $8.5 billion in 2018, notwithstanding the straitened climate. Hayes said the platform is “well positioned to weather the low volatility,” adding that:

“There are some reports of other OTC dealers and exchanges letting go of employees because obviously volumes have fallen and they hired aggressively. Our expansion plans have not changed, we continue to hire across the whole organisation.”

Yahoo’s report includes opinions from other industry experts, whose past experience has led them to draw a different prognosis to that of Hayes’. EToro senior analyst Mati Greenspan is quoted as saying:

“In 2016 the gains started very gradually until it snowballed. Now that awareness and education have skyrocketed, I have a feeling that it’s going to happen a lot quicker the next time.”

As reported last week, Bloomberg’s analysts have joined the ranks of experts who consider that Bitcoin (BTC)’s low volatility levels signal the coin is finding a bottom, viewing this as a positive sign in terms of fostering “uses cases […] other than speculation.”

In October, Blockchain Capital’s Spencer Bogart concurred that Bitcoin appears to be “bottoming,” but anticipated a turning of the tables; nothing less than a “future crypto bonfire when we have the next bull market.”