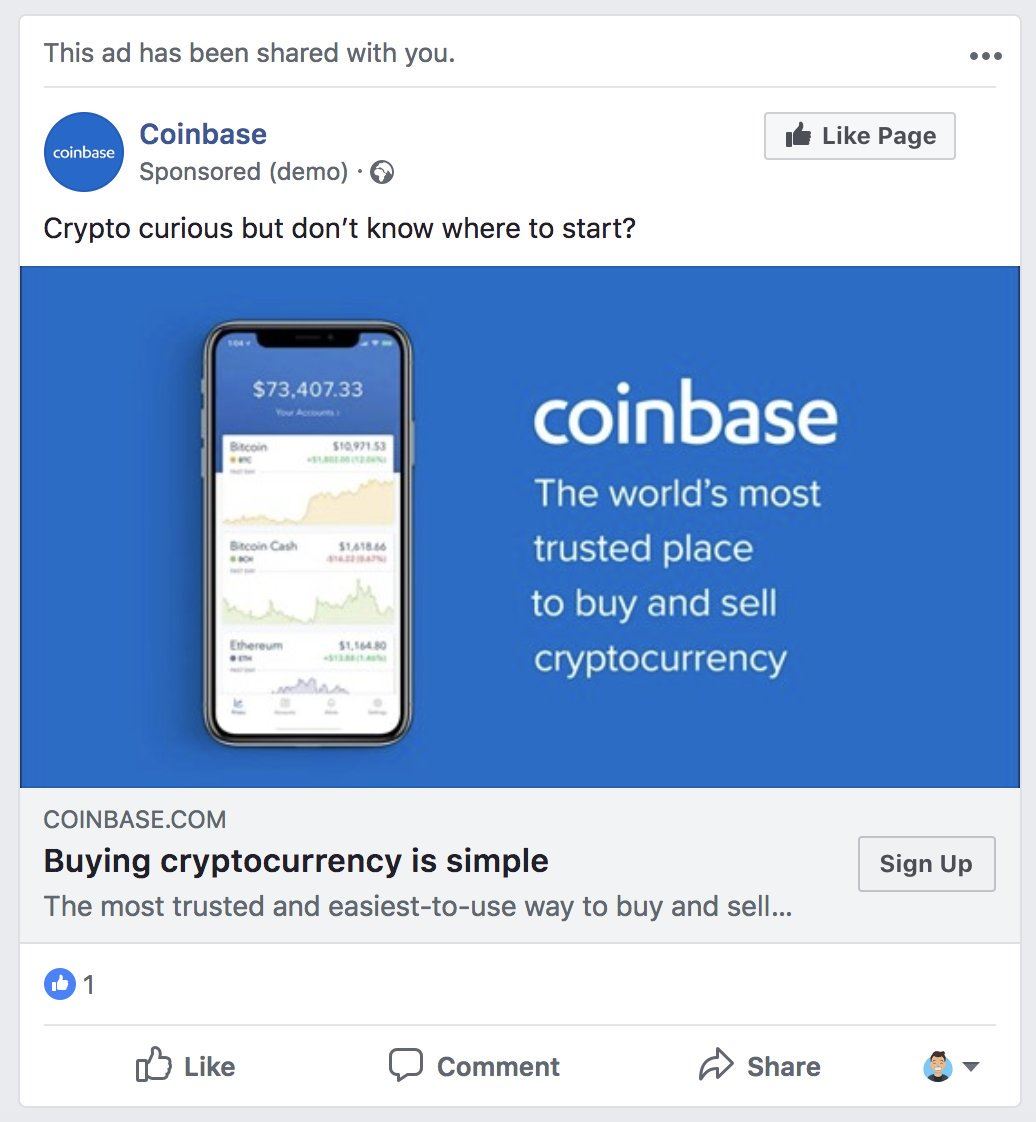 There has been quite a bit of chatter about Coinbase lately, most notably its cryptocurrency custody service, targeted at high net worth individuals and financial institutions. The company has also been engaged in a number of other activities, including its GiveCrypto fund to end poverty, and its investment in a new stablecoin, Reserve that’s also backed by PayPal founder Peter Thiel and others. Now, it’s rumored that these steps may have been in preparation for an acquisition, fueled by the recent lift on crypto advertising by Google and Facebook.

Part of the news that is fueling speculation about Coinbase is its whitelisting by Facebook. This was oddly announced via an unusual tweet by Coinbase CEO, Brian Armstrong on July 20, where he included a mock-up image of a Coinbase ad on Facebook, along with confirmation of the news.

Google’s ban on crypto ads was stumbled upon by numerous Redditors who spotted Coinbase ads on the search giant’s platform. Screenshots were posted, confirming that Coinbase ads were indeed visible again, for search terms like “bitcoin.”

While some people are speculating that Coinbase may be gearing up for an acquisition, others have different ideas. Back in May, there was a rumor floating around that Google might be planning for a new Googlecoin. At that time, this was fueled by Ethereum founder, Vitalik Buterin’s sharing of a screenshot from an email he received from Elizabeth Garcia of Google, where the company appeared to offer him a job. Silly Google. Still, these rumors were squashed when Google co-founder and Alphabet president, Sergey Brin made a statement while on a panel at a crypto summit in Morocco. He stated that Google “failed to be on the bleeding edge” of blockchain technology. Regardless, Google’s game has often been to acquire new businesses, rather than building everything in-house.

The rumors that Coinbase may be up for acquisition also come at a time when Bitcoin and the rest of the market is on the cusp of a major bull run. We are not financial advisors, so be sure to speak with a professional before making any investment decisions. However, consider that Bitcoin broke $7,500 last week, and it may test $8,000 soon, as it is currently trading at over $7,700 according to CoinMarketCap.

While Facebook and Google have become more crypto-friendly of late, Twitter has not lifted its ban yet. This is not surprising, given that Twitter CEO, Jack Dorsey’s other venture is the payments platform, Square, where he is integrating Bitcoin and other crypto payments and would seek to minimize any potential competition.

Armstrong gave clarity to the crypto community via several tweets. With the market turning around, he stated, “We use the down cycles to build a strong foundation so we can thrive in the next growth cycle.” As we are possibly entering into a growth cycle, it is only reasonable to assume that Coinbase will have more news to report.

Outside of running the business, Armstrong is also getting into the Washington lobbyist game, with plans to form a pro-crypto PAC (Political Action Committee). In other words, Coinbase will back pro-crypto candidates in US elections.