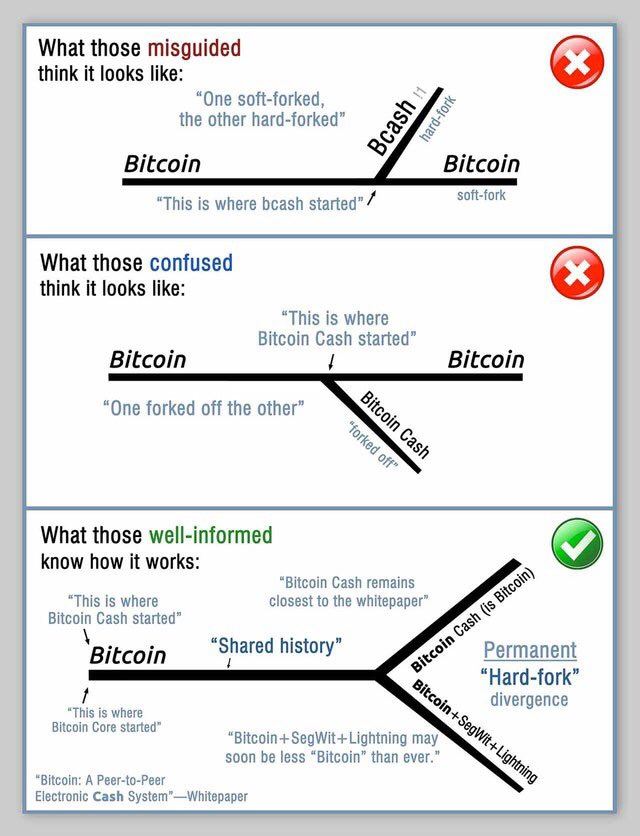 On April 5, 2018 Roger Ver tweeted from Seoul Korea, “Bitcoin Cash is Bitcoin.” He included a diagram that showed three scenarios related to the fork of Bitcoin Cash from Bitcoin. In his diagram, he suggested that people who see Bitcoin Cash (BCH) as a “hard-fork” that branched off of Bitcoin, with Bitcoin (BTC) continuing as a “soft-fork” on its own trajectory as “misguided.” In the same diagram, he labeled people as “confused” if they believed that BCH was “forked off” BTC, where BTC continued on its own trajectory. And, he suggested that those who are “well-informed” on how Bitcoin works realize that Bitcoin Cash “is Bitcoin” as a permanent, “hard-fork” divergence, where “Bitcoin + SegWit + Lightning” is “less ‘Bitcoin’ than ever.”

Roger Ver, an early investor in Bitcoin-related start-ups gave up his US citizenship and now resides in Japan. He promotes technologies including Bitcoin Cash and VeChain, and has invested millions of dollars into start-ups including Ripple, Blockchain.info, Bitpay and Kraken. Because of his history in crypto, and his large base of over 500,000 Twitter followers, his words carry a lot of weight. That said, his premise received a mixed response.

Those who supported Ver’s opinion suggested that the fork on August 1, 2017 permanently changed Bitcoin and followed the spirit of the white paper, where BTC with SegWit and Lightning Network layered on top of it does not.

It may be true that BCH is more aligned with the original purpose of Bitcoin. In a way, Lightning Network centralizes certain components of BTC, where people who control the nodes require a level of trust, counter to the “trustless” network that Blockchain seeks to create. However, there are several points to consider. First, BCH has a different name than BTC. This is akin to a cryptocurrency like Litecoin that may also be considered to be more aligned with the original white paper. Nobody disputes that LTC is not BTC; the two are clearly different. It therefore follows, that BCH is not BTC.

The other point to consider is adoption. While BTC fell significantly from its all-time-high of nearly $20,000 USD, it is still holding at over $6,000 while BCH is less than 10% of that value. In addition, BTC has a 24-hour volume of $4 billion and a market cap of $112 billion. Once again, BCH has values at less than 10% of those amounts, at $226 million and $10 billion, respectively, according to CoinMarketCap.

An influencer like Richard Ver’s opinions do matter. However, the market is a far greater force than the opinion of one person who stands to gain from sentiment shifting in a particular direction. This is not to say that Ver is entirely incorrect, or that BCH is not a valuable asset. He raises some fair questions, and BCH clearly has value, according to the people who hold over 17 million BCH coins. However, the takeaway here is that the market has already decided that BTC is indeed Bitcoin, at least until exchanges enable trades against BCH at scale and trading volume shifts over to the newer coin.